Let's all do our part to green Hamilton a little, as well as contacting our elected officials with simple, doable ideas to make our city safe and livable.

I came across a wonderful photo tour from Vancouver outlining a few simple, yet very impacting decisions being made in that city to reprioritize their traffic patterns so that everyone can move about safely. 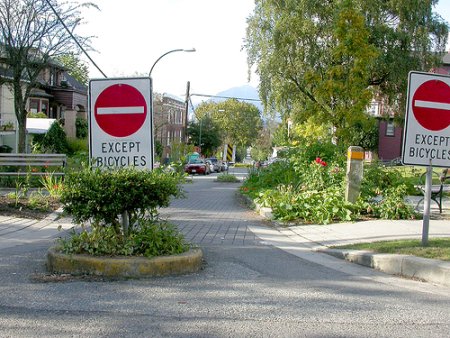 Do Not Enter - Except Bicycles (Image Credit: Spacing)

The 'naked streets' concept is wonderful and I had hoped that we would see more of this in Hamilton with recent projects such as the Bay St streetscaping in front of Copps Coliseum and the upcoming York Blvd plans at the Market.

The following Gastown photo from Vancouver shows that their city administration is willing to make decisions to slow down traffic if it means improving the quality of life and safety for everyone. In Vancouver, pedestrians have the highest priority, followed by cyclists, then transit users, and only then drivers. Every city should set that as a goal, but as we know, most don't, including ours. 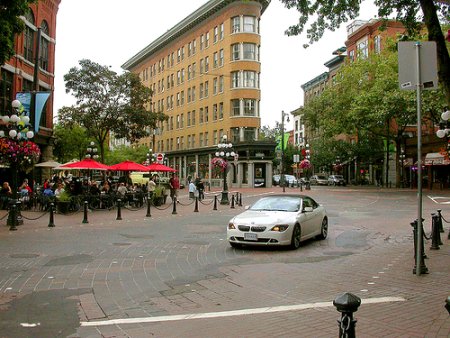 I'm also struck by the wonderful natural beauty that abounds in Vancouver. I've long wondered why we don't have more roadside gardens and community gardens all throughout Hamilton.

Local gardening guru and north end resident Kathy Renwald, recently recommended planting a veggie garden somewhere on the property of City Hall. I think it's a great idea. All throughout Hamilton, especially in the downtown core and lower city, there are opportunities to reclaim drab, concrete space for little pausing gardens, parkettes and green oasis' in the heart of the city.

Jarvis Square along King East is one such spot. Let's not just call it a 'square' and then fill it with cars. Let's turn it into a real square.

Finally, spring is officially here by the time you'll be reading this. Let's not forget about the 'One Big Idea' series in the Spectator a couple of years ago, in which the citizens of Hamilton spoke loud and clear with their choice for one project to focus on in this city. The winner? Plant trees.

I see so many spaces in Hamilton that are begging for trees to be planted. Empty boulevard strips, front lawns of homes and businesses, parks, public buildings, high-rise apartment properties and so on. The city offers a tree planting program with various ways to apply for your tree of choice.

Let's all do our part to green Hamilton a little, as well as contacting our elected officials with simple, doable ideas such as those being used in Vancouver to make Hamilton a safe, livable city.

Well, as any visitor to Hess Village can tell you, closing a city block to cars means "to other people's cars."

Not Me, I'm not sure I follow you. The example used above from Vancouver shows a 'naked streets' concept by removing signs, sidewalks etc....

The closures of side streets mentioned were in residential neighbourhoods with an intersecting access street right nearby.

Nobody is suggesting closing Hess Village from cars, although it's probably not a bad idea. Although I can live with the current set-up which is much better than how it used to be with 3 lanes.

I remember being on a pedestrian street years ago in Europe. A car pulled up to the bollards blocking access at the end apparently wanting to drive onto the street. While that seemed odd, what happened next was even stranger. The woman driving reached for a remote control and, lo and behold, the bollard blocking her way receded into the pavement. She then passed through, the bollard went back up, and she pull into her laneway a hundred feet or so down the street. I mention this only because it shows, to me, that anything can be made to work if you want it to. It's time we start to look for some solutions that will work for everyone.

Though I am in favour of looking carefully at the usefulness of the "naked street" concept for certain parts of Hamilton, I want to express concern about the "throw away" comment by Jason in his comment above regarding closing Hess Street to traffic.
On the surface it may appeal to some for reasons they believe in. On the other hand, focussing too much on a small area and effect a "small" change there can have VERY serious consequences elsewhere. The closure of Hess Street at Hess Village is a case in point. Its closure would have serious impact for vehicular movement and possibly incrementally further degrade the air quality in the lower city and compound congestion.
Refer to a street map of Hamilton. Observe the street pattern, particularly the one way streets. Hess Street is the only north bound street between Locke Street on the west and Bay Street on the east which has traffic controls for crossing Main Street and extends north to King Street. That's a long way!
If you live in the Durand neighbourhood (bounded by Main, James, the Mountain and Queen Streets) your movement if wanting to go west is severely compromised. Extensive detours east to Bay, or winding through narrow residential streets south of Main to get to Locke, are not only time-consuming, but also mean using more fuel to go farther and travelling along narrow streets where children play increases the danger and pollution in this residential area.
So, if changes are to be made to Hess Street between Main and King, changes also have to be made in the traffic flow and control in a much wider area. This situation will be further exacerbated when proposed development occurs on the Bay at the foot of Hess Street.

Vancouver is unlike any large city I've ever lived in.

The respect for the pedestrian is paramount. If you stand on the edge of the sidewalk, cars will stop for you, even if you had no interest in jaywalking.

Hamilton is not Vancouver. Not by a longshot.

This happened to me several times last week in Portland. I was standing on the sidewalk waiting to cross when vehicles in both directions stopped and waved me across. Also, the sheer number of stoplights in downtown Portland is amazing. Every block has a light and none of them are timed to go green. I sat in Pioneer Square in the heart of the city and was struck at how quiet it was. I could hear the sax player in the square, children laughing and running and people chatting on the cafe patio. LRT would rumble by every few minutes and cars quietly moved through the area at a safe, slow speed. In fact, I didn't see a single transport truck on a downtown area street the entire time in Portland. It should come as no surprise that in the middle of one of the worst US recessions since the 30's, cranes abound in downtown Portland new cafes/restaurants/shops are opening and expanding at a great pace. Cities like Hamilton get crushed in recession times. Cities like Portland and Pittsburgh that have intentionally created a great quality of life and business climate seem to fare quite well in the tough times.

Your one-way thinking has failed you.......yet again. Portland was able to start lowering its tax rates AFTER making the necessary investments in livability that drew creative citizens, entrepreneurs and investors back into the downtown core. Cities can afford to cut tax rates once they attract more economic activity. See, investors care about tax rates, but they also care about other things, like access to investors, contractors, customers, and pools of qualified employees, good public infrastructure, neighbourhood safety, esthetics, etc., etc. As actual business people know, you need to spend money to make money - cities that spend money on the right things are able to make enough money that they can start to cut their tax rates once more investors move in and property values start to go up.

>> Cities can afford to cut tax rates once they attract more economic activity.

So you're saying higher tax rates will actually lead to lower tax rates. Okay, how high should tax rates go and how long will it be until we can bring them under 1%?

>> cities that spend money on the right things are able to make enough money that they can start to cut their tax rates once more investors move in and property values start to go up.

How do you explain Hamilton's lower property values, even though we hire more people to do the "right things"?

If Hamilton currently spent the same amount of tax dollars/capita on employees that Burlington does, we could reduce employee costs by $128M. The tax levy in 2008 was $630M, so if we subtract $128M from the bill, it would only come to $502M.

Therefore, even without assuming that lower tax rates would increase demand for property (thus increasing assessments), just by cutting back on city staff (to Burlington levels), Hamilton could lower tax rates by 20%. That means, if you own a $200,000 house in Hamilton, you pay $672 more per year in city employee wages, than you would if you lived in Burlington.

How is it possible that we pay for more services and yet still have lower property values? It doesn't make sense.

So much wrong with your simplistic analysis.

1) Burlington can afford fewer staff because they don't have to provide social services. Hamilton provides services for the entire region. Our social service costs are mostly covered by the province (they'll soon cover all of it, and they send cash transfers to cover the shortfall in the meantime). So that money's not coming off the municipal tax base.

2) Burlington is a big suburb (tho starting to change - new mini-downtown), Hamilton is a city. E.g. Burlington has minimal transit but Hamilton has more full-service transit (still could be better). Cities have higher taxes than towns to run urban services but people save money on not needing cars so it's a lifestyle wash.

The problem today is Hamilton is a city that still behaves a lot like a suburb so it i) doesn't gain all the benefits of fully committing to an urban form but ii) still can't really compete with true suburbs like Burlington for the suburban form. So we've got the worst of both worlds.

>> Burlington can afford fewer staff because they don't have to provide social services.

I included their share of Halton region employees who do provide social services. Thus the comparison is accurate.

>> Cities have higher taxes than towns to run urban services but people save money on not needing cars so it's a lifestyle wash.

The problem with Hamilton is that it punishes investment. As a result, we get less of it. If tax rates were capped at 1%, people would be more inclined to invest here, because the cost of doing so would be less.