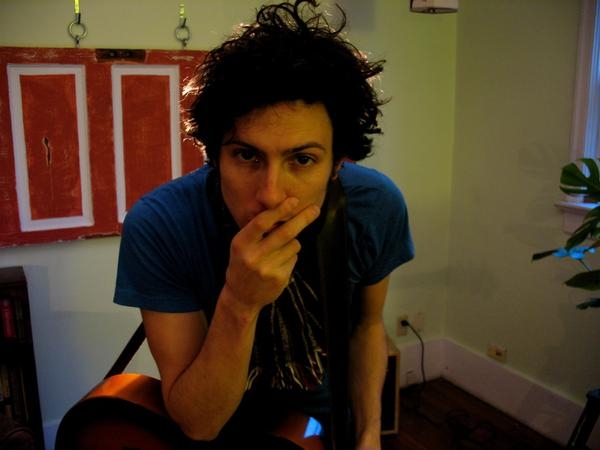 Jeremy Fisher is sick, but you wouldn't know it from his live show on October 3.

"I was going to sit down and read the paper, maybe smoke a pipe for a while before I started playing," he jokes, in reference to his cozy surroundings.

The Catherine North Studios, an old church on Park Street that's been converted to recording space, is painted in warm, jewel shades of wine and eggplant. The walls are lined with Masterpiece Theatre-style armchairs, settees and love seats.

The venue barely accommodates the 40-odd guests at this intimate, last-minute live show/recording.

Even plagued by a cold, Fisher puts on the same high-energy performance he's so well known for. It's a one-man show, but he fills the stage by strumming guitar, switching between handfuls of harmonicas, looping vocals on the fly, and taking a seat in front of the studio piano.

He plays over a dozen songs from his catalogue, including hits like "High School", "Lemon Meringue Pie" and "Cigarette", as well covers of Peter Gabriel's "Solsbury Hill" and Greg Brown's "Canned Goods".

He also test drives a few as-yet-unrecorded songs, but not before issuing the disclaimer that he's still fuzzy on most of his new material.

This proves unproblematic. The charm of a Jeremy Fisher show is its laidback style. His casual, relaxed approach, his lengthy between-songs banter, his willingness to fail in front of you (during a show, he once asked a fan to read him the lyrics to a new song from the liner notes), and his genuine love of entertaining, combine to offer his audiences a concert experience that is refreshing for its lack of artifice.

Fisher might be on stage, but he might as well be in your basement. There's no pretense here, just solid songwriting. In sickness and in health, Fisher delivers.

Amy Kenny graduated from Ryerson University's journalism program in 2004. She is currently a Hamilton-based freelance writer who loves the arts and the outdoors. In addition to Raise the Hammer, she writes for H Magazine, The Corktown Crier and TorontoPlus. She cycles everywhere, all the time and urges you to do the same.