The Fly: A Consideration of Animal Rights, Landscape Sketches, and Mortality

One of the things I like to do on my lunch break is to wander the as yet unfinished top floor or our building. It's not my space, but it feels like it is because no one else goes up there.

(Except for the one time when our office, unbeknownst to me, hired a security company for a week and the security guy and I approached from opposite directions and scared each other mute and catatonic as two martial adversaries each planning his opening advance, until one of us—I can't remember who—finally said "Oh Hi.")

The entire floor is open and I walk slowly to the far window which frames off a segment of landscape, capturing the experience described in a brief poem by Walt Whitman.

THROUGH the ample open door of the peaceful country barn,
A sun-lit pasture field, with cattle and horses feeding;
And haze, and vista, and the far horizon, fading away.

The idea being that what creates the cultural construction of landscape as a "picture" is the rectangle we put around it, which can even happen by accident when we approach a door frame or window from a reasonable distance. 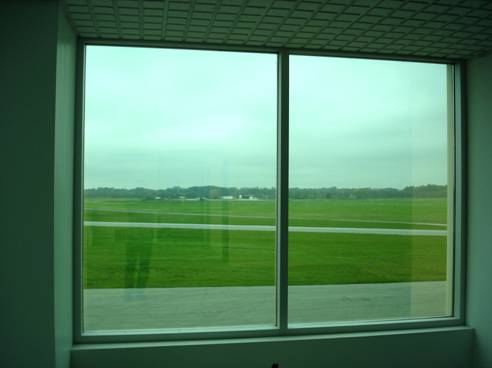 (Isn't internet surfing amazing! All I had to go on from memory was the poet's name, plus "vista" plus " barn," But I slapped these four words into a search engine and the whole poem came to me. Information used to have a reputation for being remote and unattainable. The poems and flowers I would send her didn't even get me a call back. Now I just wink at Information from across a crowded room and she rushes into my arms and surrenders all I would ever ask and an infinity beyond what I could ever imagine. I don't want to sound like some hideous macho jerk but she's become so easy it's almost not fun any more.)

I like the view from the window, but since I don't draw very well I once invited my good friend Knet Marnof, the well know Icelandic sculptor and printmaker, to come and do a sketch of it. Although what he ended up with was this:

Which suggests the indeterminate hideaway of a terrorist cell in some country I don't even want to think about. When I questioned Knet he simply grumbled, "It's not the view, but rather what the view might be." And he shuffled off, revealing still more of his butt-crack as he reached deep into a front pocket for a flask, from which he guzzled as he went.

Today at lunch, walking to my window as usual, I encountered specks, which on closer inspection were dead Cluster Flies.

Cluster Flies, the internet tells me, are born simply to bloom and drop. They appear in September and October, hatching from crevices, and alighting in South facing window sills where they quickly weaken and die. By contrast the life of a lemming is to be envied. 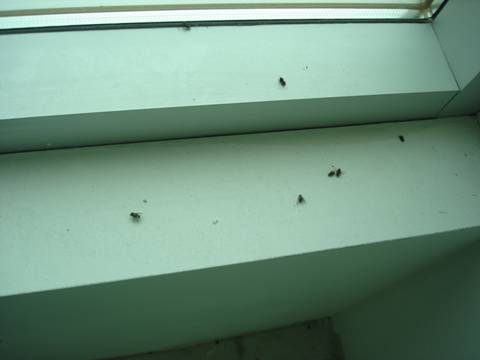 They are characterized by being a goldy-brown in colour and when they land they fold their wings neatly together, like the hands of a pious congregation in pews. These ones, of course, are all dead or dying, so they no longer exhibit these graceful niceties. How am I to help them? And should I?

In India, the Jains are known for having a reverence for all living things, and actively avoid harming even the smallest and most pernicious of insects. For the rest of us, there is generally a cultural, and to some extent personal, "hierarchy" of what creatures we should protect, what ones we can be indifferent to accidentally killing, and what creatures we should actively slaughter, either for food or for the supposed harm they might bring to us. Some of us eat meat.

Some of us eat only the meat of certain animals. Some of us eat no meat at all, but are happy to kill mosquitos or lice. Some of us care more than others about how an animal is killed for food.

Sometimes we are brought into the deathwatch of an animal in ways we never imagined. My favourite description of an accidental engagement in the suffering of animals is in a poem by William Stafford:

Traveling through the dark I found a deer
dead on the edge of the Wilson River road.
It is usually best to roll them into the canyon:
that road is narrow; to swerve might make more dead.

By glow of the tail-light I stumbled back of the car
and stood by the heap, a doe, a recent killing;
she had stiffened already, almost cold.
I dragged her off; she was large in the belly.

My fingers touching her side brought me the reason--
her side was warm; her fawn lay there waiting,
alive, still, never to be born.
Beside that mountain road I hesitated.

The car aimed ahead its lowered parking lights;
under the hood purred the steady engine.
I stood in the glare of the warm exhaust turning red;
around our group I could hear the wilderness listen.

I thought hard for us all--my only swerving--,
then pushed her over the edge into the river.

He didn't anticipate this moral ambiguity. He believed that by removing a dead deer he'd just be making the road safer for subsequent motorists. But there is a live fetus. And unskilled in the veterinary arts he is unable to perform a C-section, contrive a cervidaean incubator, and bring the fawn to term. The most pragmatic and humane action is to kill it by toppling it into a river letting mother and child decay and return to the earth. But he is entangled now with their lives, and so despite being certain this is the best solution, he also hates what he does.

I moved closer to the sole survivor amidst the dead cluster flies. I knew that once I began to consider the fly individually I would be implicated in the fly's suffering. 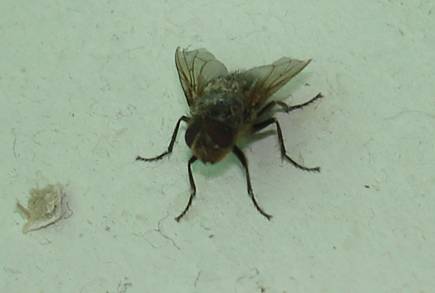 If any of you remember an early 80s psychobilly band called The Cramps, 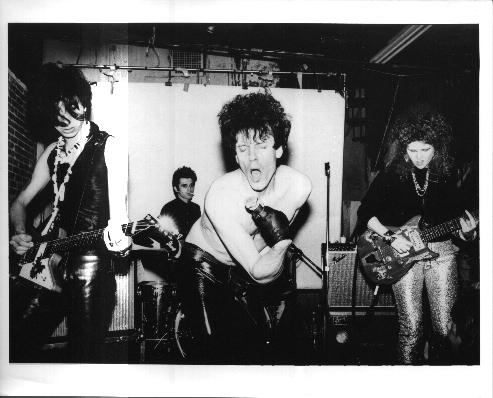 the following stanza from their song (I all but wrote "hit" L.O.L.) "Human Fly", is relevant here.

(from the album, Bad Music for Bad People)

If it's hard enough not to anthropomorphize a hurt deer, how can you not anthropomorphize an animal with all those sad eyes? (From a photographic point of view I'm sure pleased to have avoided red-eye times 48!) 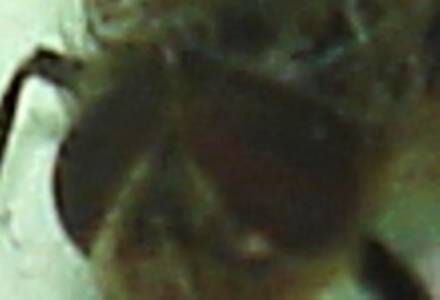 The fly was stoic, neither asking my help nor expecting my pity. In other words the fly's spirit was self-contained enough that I no longer felt needed. I didn't free the fly, I didn't terminate the fly. I walked away. By the time this essay appears the fly will be dead. How would a Jain judge me? How would William Stafford? The Cramps?

that was deep, man.

always enjoy your take on life.