Once you get your first class city bike project in place and enough people start to use it, you begin to get a new metric for your city that places increased value on proximity and multi-modal mobility. 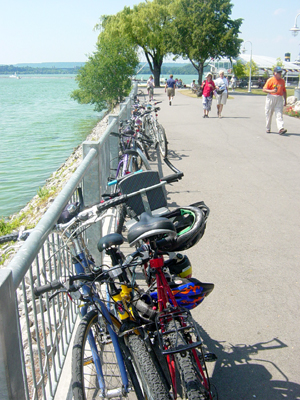 Our colleague Sebastian Bührmann wrote on Wednesday 5 March: Can anyone help with data regarding the following two questions? 1) Do public bicycle programs have had a noticeable effect on the use of cars in urban areas? 2) What is their impact on public transit use (do they hurt public transport operators or do they help)?

These are excellent questions and considerably more delicate than they might at first appear to be. Let's have a look.

The matter of car substitution, just like that of CO2 reductions, is not something that lends itself well to short-term measurement and assessment. As a matter of fact, this is as true with just about any of the policies or initiatives of the New Mobility Agenda as it is with a new city bike project.

This is not to say that a properly designed and implemented city bike project will not get cars off the street or CO2 out of the air, including in the short-term. However, for various reasons, this is very difficult to judge in a meaningful manner - and in any event the crux of the entire matter lies in what happens not so much now but rather over a period of adaptation spanning months and even years.

A city bike project is above all a process, an organic process of discovery, adaptation, and change on the part of a large number of individual citizens acting on their own and for reasons of their own.

It helps to stand back a bit and visualize what actually unfolds once you start to get a couple thousand bicycles out on the street of your city, and people begin using them to connect their lives on a day-to-day basis.

It starts first as a matter of simple curiosity, then experimentation and adaptation, and eventually for some begins to take the form of a habit.

It is this last that is the most important contribution of the city bike: people changing their lives in some fundamental ways, based on their own personal choices that make a difference to them, and which in time relate to make differences on the city and the environment.

How do you measure this? Here is a good procedure for getting a specific number for this, but believe me a number of not much use. Suppose for example this morning you walked out onto the street and asked 20 or 20,000 people parking one of their city bikes in a station in Paris, Lyon, or Barcelona: how would you have made this trip if you did not have a city bike available in order to do it?

[T]he most important contribution of the city bike: people changing their lives in some fundamental ways, based on their own personal choices that make a difference to them, and which in time relate to make differences on the city and the environment.

More often than not you'll find the answers range broadly, from: Might not have made the trip at all; Used it instead of walking; Might have taken a bus or other public transport if I could've found one, or - and this is something you're sure to hear far less often - Oh yes, I used it instead of taking my car (or even less often a taxi).

So if you're in a rush to consider that this first round of responses is all you need to come to your determination about what is going on, there you have it: city bikes just don't seem to be substituting for car trips, at most a couple of percent. If they're not substituting one for one and immediately for car trips, they're also not having any particular climate impacts. So that's it for city bikes!

So What's Going On?

But that's not the whole picture, and it is right here where the true greatness of the city bike concept begins to kick in. Let's walk through this process briefly together.

After you as a new user have gone through the necessary early stages and made your peace with the system that you have in your city, these bikes began to help you move rather subtly over into a new pattern of moving about, where you go, and even what you do.

As we saw over the last decades of the 20th century, when people have "free" access to cars they almost automatically expand the distances they travel in their daily lives, and in parallel with that land-use patterns stretch as well.

This is exactly how the dominance of the car culture led to the destruction of the city centre in far too many places.

But as the city bike user, there will be days when the weather is just too rotten for you at least to take your bike. So what do you do then? The odds are that if your city has a half-decent public transportation system, you are likely to opt for it. Even if it lacks the flexibility of a great city bike, a good bus system can have advantages of its own.

If the designers of the system do their job, the entire ticketing and fare system will support the concept of inter-mobility. Thus, at least some of us in the process move from being Mono-Modal Men (the majority of those car captives) to Multi-Modal People - a definite improvement in terms of environment, economics, fairness, and simple sociability.

So what happens is that once you get your first class city bike project in place and enough people start to use it, you begin to get a new metric for your city that places increased value on proximity. In the process, this favours local businesses and suppliers of goods and services in the area served.

All of a sudden you begin to have the makings of a new ballgame. Gradually, for a certain portion of the city's residents, that second car begins to be less needed. Eventually, first-class car sharing services also become available to complete the multi-modal chain of new mobility (we sometimes call car sharing "the last nail in the coffin of old mobility").

At that point, the idea of hanging onto your own car at high cost and often high peripheral discomfort becomes a part of the past.

A pattern break has gotten underway. All of a sudden, a relationship with our own cars begins to move into a new dimension. In the process, old mobility falls away, slowly, slowly, like autumn leaves falling off the trees. That is the real power of the city bike and the New Mobility Agenda.

Eric Britton was the founder of EcoPlan in 1966, formed to create an effective forum of international collaboration and independent counsel on issues regarding the management of technology as it affects people in their daily lives. In recent years he has turned his attention to sustainability, land use and urban planning, particularly in response to the challenges of climate change.

It seems to me that we need safe lanes or paths for bikes before we need more of them on the streets (we also need lanes and paths that go where you need to go). I've literally had my arm brushed by car side mirrors here and been sworn at for "taking up too much of the road" (I definitely wasn't but I guess there was no room to pass the other four lanes of traffic except the far right-hand lane). I might risk this on the main streets and what pass for bike routes in the City myself but surely wouldn't let my kids out on their own or wish the Hamilton riding environment on inexperienced free-bike cyclists wanting to go from A to B. It was with dismay that I read Terry Cooke's mention that bike lanes were tried on Main Street years ago (in a Spectator piece recently ) and learned what happened. Make cycling safe and a lot more of us will do it far more regularly. We really really want to.

I'm glad I've found this blog as it addresses a lot of issues I've been grappling with. But I don't live in your Hamilton. I've lived in Hamiltons here in Australia but not one that gets snowed on..

My view is that our urban climes have to get away from vehicular cycling to pedestrian cycling like the Dutch have done. There is no other way to proceed. that is not only a shift in engineering but also one in transit culture.

As one commentator has written:"It actually comes down to a single point. Generally when you cycle in the Netherlands you are not sharing space with cars. This makes cycling very pleasant and relaxed. It reduces conflict with motorists and it leads to much greater safety. What isn't necessarily so obvious to outside observers from locations with less advanced cycling infrastructure is that it also leads to cyclists having journeys which are more direct than those of motorists. As a result, cycling is a much more appealing form of transport."

So I think the whole vehicular culture needs to be targeted -- and that's why I agree with an earlier post here in favour of trams over buses. I grew up in Melbourne -- here in Australia -- which is like Lisbon in regard to its tram preferences. And trams rule OK!

I find in my present city that while the local authorities will foster people into recreational cycling by adding bike tracks to parks and such; restructuring the road grid so that bikes are given clearly defined pathways and lanes independent of car traffic is merely deferred to very superficially..