Good, bad, ugly: Hamilton's got it all, and we love it.

We at RTH hope that the latest effort to finalize a deal between the city and LIUNA over the poor, neglected Lister Block will bear fruit in the form of a restored building. LIUNA has indicated that it's willing to sell the building to the city - after completing the renovations - and that this may turn out to be cheaper than leasing space.

The effort to bring a CBC radio station to Hamilton is moving slowly but steadily forward. According to Ted Kennedy, Program Director of English CBC Radio:

The Standing Committee for Heritage, who are conducting the CBC mandate review, has not yet tabled their report in the House of Commons. We believe it can be expected in the few weeks after the House begins sitting again in mid-January.

It's been looking as though construction is stopped on the new London Tap House at the corner of Main and John. Not to worry: Scott Rowe, the general manager, assured us that they have "just been working really hard on getting the interior finished up." They hope to have the renovations completed by some time in March.

Hamilton's affordable housing provider, CityHousing Hamilton, announced this week in a press release that it is launching a $1.9 million Energy Retrofit Plan to reduce energy and water use in the buildings it manages. The retrofits will include energy audits, boiler replacement, water conservation, energy efficient lighting, new refrigerators, and a solar water heater pilot project.

This week's Future City Hamilton scenario comes courtesy of your intrepid editor. Check it out. Also, be sure to watch the video commentary by RTH contributor Adrian Duyzer, who is also one of the programmers behind the Future City website.

Contract negotiations between the city and CUPE Local 5167 have broken down as negotiators from the two sides "reached an impasse". The city held a special Committee of the Whole meeting on Thursday afternoon to discuss the situation. No details on what was said yet, but we'll keep our ears close to the ground.

Faster GO Service On the Way

The Ontario government announced that it's buying faster and more fuel efficient engines to operate GO train service out of Hamilton, which should improve service. GO is also looking at opening a second station in downtown Hamilton, and the ever-dangling prospect of restored VIA service is still a possibility.

The Centre Mall Farmers' market will soon move to a new, permanent home on Britannia Ave. between Ottawa St. N. and London St. N. City Council just approved a zoning variance to allow the market on two parking lots that gird Brittania - and the BIA actually supports the loss of 20 parking spaces. 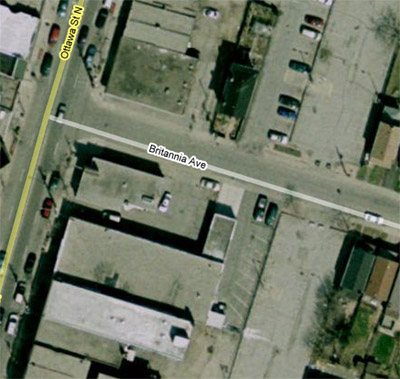 In the wake of last week's Lister Block antics, City Council is taking a fresh look at a proposal to penalize property owners who don't maintain heritage buildings. CATCH reports that city staff had recommended establishing "minimum property standards for the maintenance of heritage attributes" in September 2007, but the idea didn't get past the Planning and Economic Development committee.

Last Wednesday, Councillor Brian McHattie moved [PDF] to resuscitate the proposal and seek public consultation. In what is sure to surprise you, Councillors Lloyd Ferguson and Maria Pearson opposed the move. Ferguson objected to the idea of forcing property owners to "fix up properties that they either don't have the ability to do or the desire to do."

Pearson objected to the idea making its way to Council after the Planning Committee defeated it, but the city clerk confirmed that the proposal was appropriate because Council had not previously voted on it.

Last September, Council passed a by-law banning trucks from accessing McMaster University via Sterling St. The McMaster Daily News reports that the by-law takes effect on January 31, after which trucks will have to access the school via the centre of campus.

The University is worried that the additional truck traffic will present safety concerns for students walking across campus, and has asked the city to reroute 25 buses a day to stop just off-campus to offset the trucks. The city is considering pushing back the deadline so it will have enough time to re-route the buses.

Are you a student and looking for a summer job [PDF] with the city? [Insert obligatory city worker joke here.]

To qualify, you must: be legally entitled to work in Canada, have a Social Insurance Number, and be currently enrolled full time at a high school, college or university program and returning to school in fall, 2008. Resumes are due by February 22.

Are you in a band or involved in making a film and interested in playing/showing at Toronto's North by Northeast festival on June 12-15? Visit their website and follow the links under "Do NXNE" to apply. Applications are due by January 31. Seriously, this will be more fun, albeit less lucrative, than picking up trash from the flowerbeds on Main St. West.

It's confirmed: coffee goliath Starbucks is opening a new location on Locke Street in the former Robert David store at 158 Locke St. S. The general vibe seems to be that this is a positive sign about Locke Street's vitality and will actually benefit the local independent coffee shops.

Finally, the Hamilton Creative City Initiative, which conducted a survey last year on creative organizations in the city, has published its first report summarizing the responses of the survey participants. RTH will be publishing a more detailed review in the next few days, but here are some highlights:

The HCCI, which is a collaboration of the Imperial Cotton Centre for the Arts, the Centre for Community Study and the Community Centre for Media Arts, is now set to begin phase two of its study, which will "garner a more holistic view of the impact of this sector on Hamilton" by studying creative workers, audiences and consumers in more detail.

First of all, thanks. Enjoy these updates very much.

I am so put off by McMaster's continued disregard of the Westdale community. And now, they're worried about the safety of their students? It is to laugh.

Why is it that I need to inform all my neighbours of a planned renovation, but they can do whatever they want?

That campus is overbuilt and over-enrolled, and no one seems to care.

The fact that they couldn't care less about their students' safety the minute they set foot off campus puts the lie to their 'concern'. Last time I checked, students live, walk, and cycle on the streets of Westdale and are equally endangered by heavy truck traffic on our narrow streets.

My concern Is they wish to kick buses off campus. What a great idea, let's make it HARDER to take transit.

I am tired of listening to Westdale residents whine all the time. For some reason, they fail to realize the hard cold truth that they live next door to a major Canadian university that is undergoing a massive construction boom and undergoing unprecedented growth in student enrolment. Face facts: you live next door to a a key economic engine in the city and will have to put up with necessary frustrations like trucks trying to access the campus and thousands of people trying to get to work and school everyday. If you don't like those facts, I suggest these whiners just simply move to a sleepier area of the city... maybe Ancaster or Dundas will better suit their needs!

No anniversary party this year? Or are you waiting for the London Tap House to get finished? Just wonderin'

^ hmmm good idea. Let's have it at London Taps when it opens.