A new organization is forming to promote modern light rail in Hamilton.

For some time, Raise the Hammer and other individuals and groups have been pushing for a modern rapid transit system in Hamilton to spur downtown economic development, attract new riders, and improve air quality, among many other benefits.

With the exciting announcement in May of a provincial commitment to help pay the capital costs for two new rapid transit lines in Hamilton, light rail started to look like a serious possibility and not just wishful thinking.

However, the city's transportation strategy, developed before the provincial announcement, is committed to investing in Bus Rapid Transit (BRT), like an enhanced B-Line.

After some preliminary discussion at a Transit Users Group meeting in September, 2007 and a more detailed strategy session in October, we're happy to announce the launch of Hamilton Light Rail, a new organization dedicated to promoting the concept of light rail:

The site's purpose is to organize public support for light rail in Hamilton, with timely information, news, resources, presentations, and other tools for outreach and education. 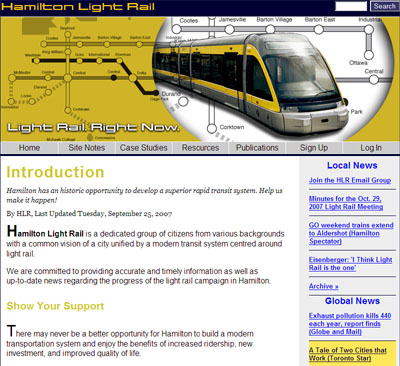 After a discussion about affiliations, the group decided to focus initially on the content and strategy and not get too hung up about organizational formalities.

The two major action items that came out of the October meeting are to create a draft of a presentation we can make to various individuals and groups, and to establish an outreach strategy that we can deploy starting in January.

(You can read the minutes of the October meeting.)

If you're interested in getting involved or just showing your support, you can join Hamilton Light Rail. You can also join the email discussion group via Yahoo! Groups.

The next meeting will be held:

Congrats on the formation of this new organization. I support you in principle and look forward to learning more about your efforts and how light rail can make a difference. I can't make the meeting due to another engagement but count me in as an interested party.

This is one of the most impressive grassroots movements that I have seen in Hamilton. It is progressive and has the potential for making an extraordinary impact on the city.

Good luck, I look forward to see your progress.

This could be the biggest development in hamilton we'll see in our lifetimes. i really hope we can help to make this happen!

perhaps the best way of marketing the benefits of light rail to Hamilton is to use the example given in other cities. As everyone knows, highways are a magnet for extraordinary amounts of development along their path and at interchanges. I realize many people reading this don't have much 'love' for the highway-driven sprawl. But bear with me. Go check out the east mountain and upper stoney creek right now. Developing like crazy. I know, it's low density and car dependent. But here's where we can use this very familiar example to win support for light rail. Light rail is just as much a magnet for development as a highway. Portland Oregon continues to go crazy building more light rail lines first and foremost (in their own words) because it is an 'economic development tool'. The difference between this and a highway starts here. It isn't low density, car dependent development that sets up along light rail lines. It's high density, mixed-use developments that are LRT dependent. That means walkable and urban. It's a completely different type of development, but absolutely no less of it. in the past 5 decades Hamiltonians have only known the highway-driven style of development. LRT from Mac to Eastgate would radically change the face of our most important neighbourhoods and downtown core. It has the potential to create a boom in the urban core the likes of which we haven't seen in a generation. The more support for this proposal, the better.

This is very encouraging news ... Especially on the day I learned that a concert hall, the size of Massy Hall will be constructed on the corner of King and Hess. I know this is probably old news, but still very exciting.

Did you consider getting some sponsorship from one of the rail car manufacturers (like Bombardier)? I bet they have development funds to help support groups such as this.

yes that's all part of the talks. we wouldn't want to appear to be funded by corporate interests though, so we would investigate multiple manufacturers and ask them for input about how to handle hamilton's unique physical layout (i.e. the escarpment).

By the way, I have my own idea about how to handle the escarpment haha... http://hammerboard.ca/viewtopic.php?t=92

This is a great idea, an idea whose time has come for the great city of Hamilton, Ontario, Canada. All hail brother McGreal. The future Mayor of Hamilton.