It wasn't love at first sight; it was pity.

Fifteen years ago, my wife, Susan, and I were walking through the Kingston Humane Society's adoption kennels looking for a dog when we spotted her. While the other canines jumped and barked and wagged their tails hoping to be wanted, Wendel, as she would soon come to be known, stood at the back of her cell with her head lowered to the floor and her tail tucked firmly up between her legs.

She was the saddest looking animal I'd ever seen. We went into the cage to pet the dog and there was still no response. I asked an employee what was wrong and she said that Wendel had been their longest serving inmate. At around the age of one, the poor dog had been driven to the country and pushed out of a car that took off.

We were also told that most dogs ending up in the Humane Society are around one year of age. Evidently, a lot of people lack the sophistication to realize a puppy eventually becomes a dog and the compassion to deal with it humanely. (We're an awesome species.)

We took Wendel to the walking area and she moped the entire time. I had my doubts about having Debby Downer for a pet, especially since I'd planned on bringing home a big bruiser and calling him Wendel, after the second greatest hockey player of all time. Susan, however, always gets a Charlie Brown Christmas tree, so I knew we had a reclamation project on our hands; a neurotic girl named Wendel.

We took her to the counter and, while Susan filled out paperwork, I got on my knees to better acquaint myself with our new companion. Suddenly Wendel's tail started to wag at a ferocious pace that threw her entire body around and she began baying and howling at the fluorescent lighting tubes.

I was trying to pet her head and get her quiet when she lunged at my face and started kissing and licking me like a drunken groupie on Elvis. She knew. 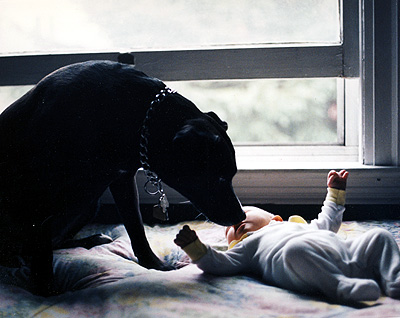 Wendel sniffing the Big E when she first came home

Wendel has never stopped kissing. Whether we're gone two minutes or two weeks, the welcome home is always the same: Wendel spinning and twisting, wagging and jumping, and trying her hardest to kiss someone on the lips.

It's not a simple matter to bend over and unlace your boots when Wendel's frantically happy to see you. Keep your lips pursed or your apt to get a mouthful of dog tongue.

Since Wendel, our first, there have been cats, kids, more cats, gerbils, fish, turtles, and guinea pigs. Everything that we've brought home has been welcomed by our friendly, curious, loving dog. 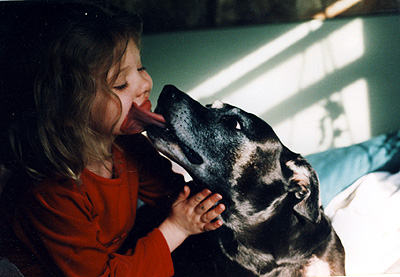 Wendel and Erin years later and close as ever

I'm not sure what happened, but Wendel is suddenly grey, virtually blind, and deaf. On three occasions, she has had cancerous lumps removed and the vet has told us she won't survive another surgery, so the tumour on her ribs grows unimpeded and now looks like a pound of grapes under the fur.

For years, Wendel slept on the bed with us and when it was cold, she'd crawl under the covers. The jump is too high for her now, so she sleeps on a special pillow at the end of our bed.

When Wendel was younger, she'd sit on my lap for hours while I pecked away at the keyboard. Nowadays, she sleeps on a sleeping bag on the floor behind my desk. Feeling her presence and listening to her snore is comforting. Our beautiful friend is loyal to the end.

What a wonderful story. It just goes to show that animals have guardian angels too! It also brings home the point that more should be done (and soon) to bring harsher, and much stiffer penalties toward those who abuse animals.

you're killing me, man. it's a story that many of us can tell. thanks for sharing.

I never cease to wonder at how a pet - even other people's pets - can enhance your life. To me the saddest thing is a person who recoils at the sight of a dog, that kind of suppressed emotional reaction suggests they are only experiencing half of life.