Does the Radial Trail closing represent a legitimate threat or some CYA by the city?

Back in August, the City of Hamilton closed a two kilometre section of the Radial Trail rising from the Chedoke Golf Course to where it tangents Scenic Drive.

Hamilton has a lot of fine recreational trails, but in my opinion none are as attractive or useful as this stretch. 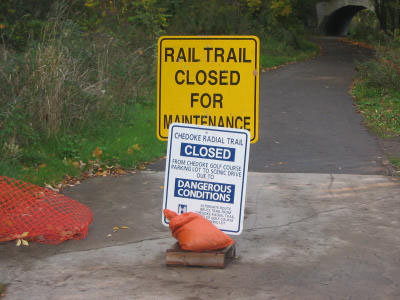 At a recent Public Information Session on Oct 11 (which unfortunately I did not know about), the secret problem and possible solutions were finally revealed to the public. 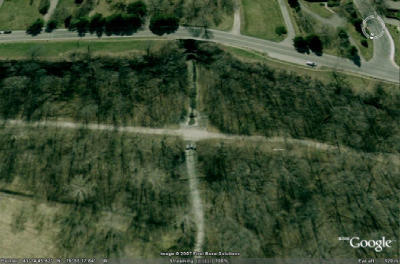 If you can tolerate engineering terminology, download the document [PDF, 107 KB] from the City's website. In terms of engineering quality, it is adequate. However, it is narrowly scoped and does not address the elephant in the room, i.e. why the trail is deemed to be so imminently dangerous as to justify closure. I suspect there is some Cover-Your-Arse rationalization at work.

It would be nice to hear from anyone who attended the session. I would expect they asked relevant things like: Is this an imminent risk to trail users? If not, why have you gone to such extreme lengths to block the trail and fence off a walking bridge at both ends? And, when on earth are you planning to reopen the trail? 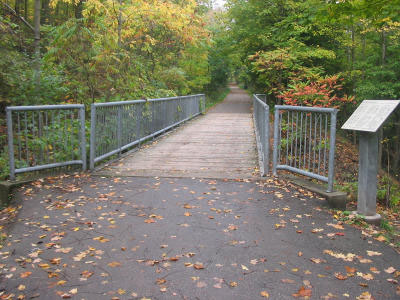 The no-longer fenced-off bridge. Hopefully some City fascist got an earful over that touch of overkill.

I admit, like many other anarchists who have bypassed the trail blockade, to having ignored the City's warnings about dangerous conditions. Of course, when walking around the slippery, muddy ditch where a bridge was fenced off, one is subject to more risk to life and limb than the actual problem that closed the trail.

As this is an inspired-by-Fenton photo essay, I feel compelled to fly off on a tangent. The bridge fence took a momentary hiatus in September. I suspect this was courtesy of some adventurous youth who rammed it with a stolen golf cart.

Ironically, the golf cart ended up in the exact spot in the creek that caused the City Fascists to erect the fence. The cart, and eventually, the fence, were removed before I could capture them on camera.

While trespassing, a few times I got off the bike and looked around for what horrors could be causing the kafuffle. None were apparent to my untrained eye. But on one of these outings, another trespassing scoundrel filled me in. Here's what he showed me: 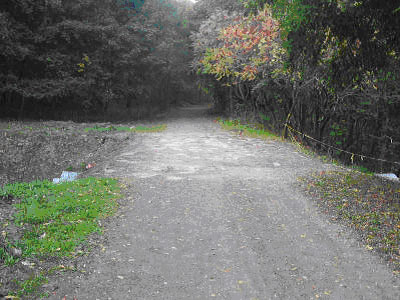 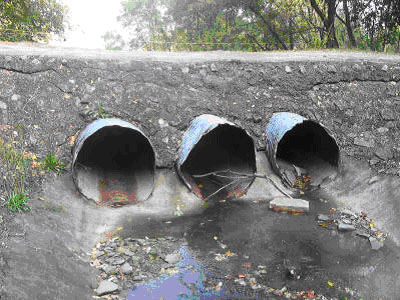 A trickle goes in... 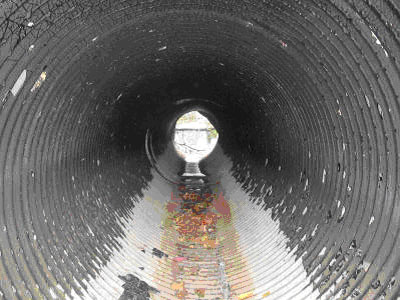 ...and does not make it out. What you do not see is the amount of erosion beneath the culvert. Is it minimal or significant? I would bet on minimal. 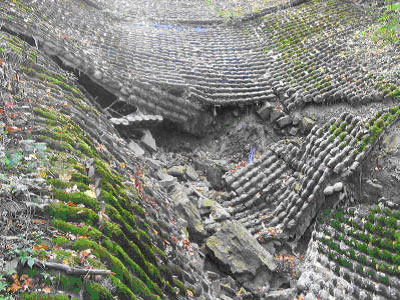 Washed out Fabriform concrete about 20m below the culverts.

The three culverts, spouting massive amounts of water during a flooding scenario, might land at the washout. What a picture that would make! If you look closely at centre right there is a black object that looks suspiciously like a golf cart bumper...

What the City and consulting engineers have not done is a risk analysis. This means a rough quantification of the chance of this structure failing, under what conditions it could do so, and the chances of a person walking or cycling by at the time.

When you start multiplying these low probabilities, the case for complete trail closure becomes weak.

A quantified risk assessment of this sort is beyond my enthusiasm for it. But here is a challenge that I would bet heavily on: The chance of loss to life or limb from this creek washing out is comparable to or less than the exposure from vehicular traffic that pedestrians and cyclists are subjected to every day.

I challenge the City to disprove that, and if they cannot, then reopen the trail already.

I don't know if it's "here here!" or "hear hear" but I agree whole heartedly. Who makes these decisions?

Definitely CYA. If you read the "report" the City has temporarily closed the road until they find a way to stabilize the bridge area. Construction won't be til next year between July and November. Never taken the trail since it's on the other side of the city but I think I'd like to see them do the natural channel design option 6 or something like that. It'd look much nicer than the Fabricrap they want to put down.

it's going to be closed for another YEAR??

what a joke. this trail is a commuting path for some people, it's not all fun and games!