You've heard it before. We need intensification, that is, increased population density in our cities. In general, it is impossible to rationally disagree with that. But the devil is in the details.

One proposal seeks to build 750 condominium units on the site of the old Sanatorium near Chedoke Hospital on Scenic Dr. Many nearby residents have posted signs opposing the project, advertising the website www.chedokebrow.ca. 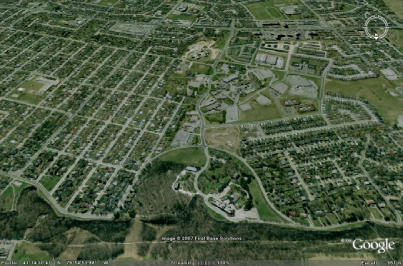 Chedoke Sanatorium area. Note the surrounding land use. Development plans involve building condos on the west side of the half circle contained by Scenic Drive and the escarpment edge, with preservation of the woodlot to the east. View is oblique from the north. (Image Credit: Google Earth)

My concern is not for the positions of the developer, Deanlee Management, the seller, Chedoke Health Corporation (Hamilton Health Sciences), or the opposing neighbours. What is worrisome is the City of Hamilton's interpretation of what constitutes desirable intensification. 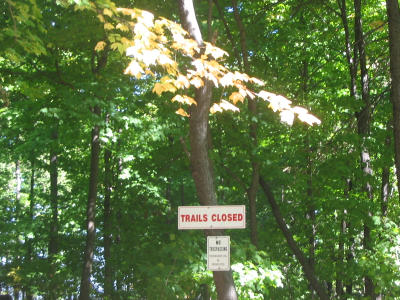 Woodlot at east end of the property. This is to be preserved. There is no explanation why it is signed "no trespassing" and fenced on the north side.

The city has scheduled several meetings to discuss this plan, the first of which occurred on Sept 11. By the looks of things, it follows the same old story of other city proposals: "This is what we are going to do, please make a few minor comments so we can say there was public input, but otherwise shut up".

The city website has copies of the presentation [PDF] given on Sept 11, 2007 to promote this developer's proposal.

It looks like a PR job. Although it appears to be an informational document, there is nothing contained within to evaluate how well this proposal meets the guidelines of the various legal governing acts it so boldly plugs: Provincial Policy Statement, Places to Grow Growth Plan, Greenbelt Plan, and Niagara Escarpment Plan.

All of that sounds really impressive.

But few other areas in Hamilton that are not in the middle of sprawl are as isolated from employment and institutional lands. Without mixed use, there is little to benefit from increasing residential density, except preserving farmland. 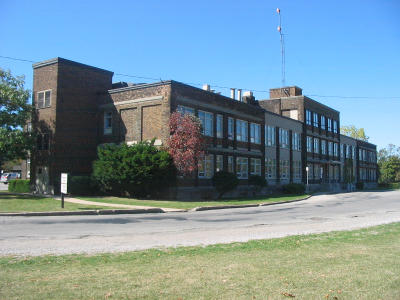 On the plus side, parkland is abundant around the Sanatorium, even though some of it will be compromised by the development. Chedoke Hospital is a significant employer, located a five minute walk to the south. Two bus routes currently serve the site, although connections with downtown are circuitous.

Otherwise, commercial activity is almost nil within two km from the Sanatorium site. There are only a few scattered businesses on Mohawk road, fewer still of use to the pedestrian or cyclist.

Mohawk College is a 2.5 km walk on a route which provides easy cycling. The euphemistic Meadowlands is 3.5 km to the southwest, but the section of Mohawk road crossing the Linc is one of the most dangerous cycling routes in the city.

The escarpment provides a serious impediment to the lower city, especially in the uphill direction. My cycling time to Locke Street is 13 minutes downhill by taking the most direct route, an unofficial rocky trail nearly straight down the escarpment to the radial trail, while going up takes a grueling 20 minutes.

McMaster University, less than two km by air, stretches to almost four km by the shortest walking path, 11.5 km via the 403, and eight km via already very congested Beckett access. 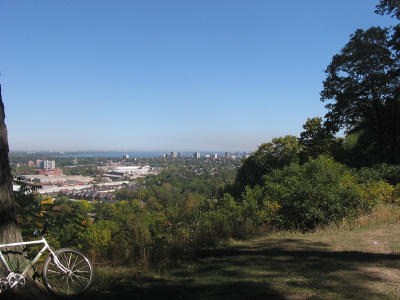 View from the brow looking northeast over the City. So close and yet so far...

Let's look at a few examples from the planning acts to evaluate the proposal. Here I quote Places to Grow goals from the presentation, with my comments about how well this specific project meets the criteria in italics:

GRIDS has a similar list. The very last point is this:

Additional intensification across the built-up area.

Note the key word is "additional", you don't start there.

There are similar lists in the presentation, so it is educational to go through it and jot down comments. By the end, you have a pretty pathetic example of how intensification will contribute to a better Hamilton.

What this proposal boils down to is more residential development within a uniformly residential area. More of the same. More cars, more congestion, more pollution.

Contrast that with the intent of all the Plans I have listed above. More residential density is good, but only in the setting of mixed use: commercial, institutional, and residential close together so we can build a healthy, walkable, community-minded city with a return to the concept of quality of life.

The goal must be to get away from the harmful car-dependent planning model which rubber stamps every developer's short term agenda.

If the city cannot find brownfield lands to convert to residential and must destroy historical / parkland, then I have a couple of better suggestions. Auchmar, and the Century Manor at the Hamilton Psychiatric Hospital.

Both are similar properties. Both are much more closely situated to "nodes" of commercial and institutional land uses. Both have better transit access and proximity to the lower city. 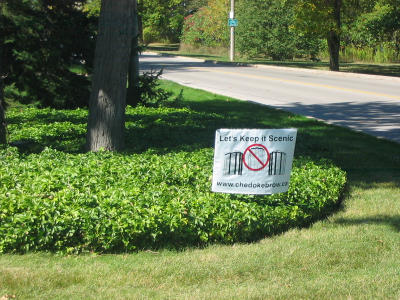 I am not defending the residents opposing this proposal. One can guess from their monster houses, lush lawns, luxury marques in the driveway and signs like the one above that their opposition is mostly aesthetic in origin.

I consider that to be a superficial argument. More legitimately, some may actually fear losing the area slated for development, and it is truly a gem. 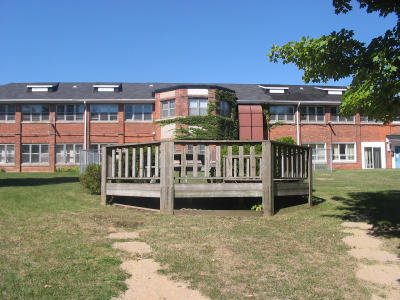 If the City is willing to go to battle to push through this development, you have to worry about the damage it will do to the intensification movement. This project has too little upside and will be a poor example of where we want to go.

Well sculpted and thought provoking article.
I have lived in the area for over 20 years and do not mind a move to greater intensification. This area does not lend itself to a locally mobile populace. Vehicle traffic is choking and will become horrendous with the development along scenic.
For those of us who live in this area it is almost impossible to make of the west mountain when the daily carnage occurs on the Linc/403 connection. Looking forward to adding several hundred cars to that mix.
We continue to elect politicians that serve the area developers and are unable to craft a vision for the future in the context of a sustainable future. We are getting what we deserve.

I share Bob's opinion of your piece. Nicely Done.

However, I take issue with this lone paragraph, "I am not defending the residents opposing this proposal. One can guess from their monster houses, lush lawns, luxury marques in the driveway and signs like the one above that their opposition is mostly aesthetic in origin."

Why marginalize this group? Does an appreciation of beauty and space, and the resources to achieve that outcome deserve vilification?

Would the city be better served, if these large lots were carved up into homogenized zero-lot building tracts? Would the “Brow Lands’ be better for that outcome?

Ultimately, the aforementioned(Browlands), may be the result of what you rightly describe as “Bad Intensification”. The owners of these homes are economically mobile - if they don’t like what is occurring in their neck of the woods, they will pull up stakes and move on -leaving more opportunities for the developers to carve up the distinctive for the homogenized building tracts that assault our senses everywhere.

As a recent emigrant to your city from the holus bolus sprawl of Alberta - I’m at once impressed at the cultural resistance to the developementlism which has overtaken the ‘wild rose province’, and dismayed at the indifference towards this insane proposal for developing what should belong to all Hamiltonians.

As you so aptly put it, “it is a gem” and it should be considered as such - a diamond in the rough, to be studied by a master gemologist and precisely cut for the pleasure of all denizens of this wonderful city, and shame on us, if we stand aside and let opportunistic carpetbaggers destroy a cultural treasure.

i"m just guessing here rod, but i think the author means local residents are really interested in preserving the exclusiveness of their very low density, no sidewalk, car dependant neighbourhood.

having lived on scenic for 20 years and living next to "our" park , the san lands, i really do not want growth or toewnhoses or condos. call me parochial but when you start to bring cheaper housing than mine, you bring kids and crime and welfare cases. the city ought to have bought the whole place when they had a chance, we wern't on the ball especially when hamilton health sciences kept telling us housing was going there. i'm ready to sell anyway , maybe i should just buy a condo or two there and move my furniture over with a trolly
Signed.. the B man

The reason the sign is there to say the trail is closed is because when the environmental assessment was being done the Chedoke Health Corporation (who owned the land) was informed that if the forested area was to be preserved in the long term then the trails would have to be closed because the foot and bike traffic was damaging the root system of the trees and therefore damaging the trees and their chance at survival. The root systems were shallow and close to the surface. The pedestrian and bike traffic was compounding the soil making it harder for the trees to get the water they needed for their size.

I have worked at Chedoke for 23 years and made a point of finding out why they closed the trails when I saw the signs go up.