I Could Write About

It's been a summer of little writing, so picking one topic is tough when there are so many to choose from.

It's been a summer of little writing, so picking one topic is tough when there are so many to choose from. I could write about that.

I've just finished an eight-week vacation. I could write about the beauty of time off, but wouldn't know where to begin.

I could take an easy route and write about my kids, but I've done that too often. I could write about lots of other stuff, anyway.

I could write about our new lawn, deck, and garden. Last September, I wrote about the labourious task of converting an asphalt-concrete-gravel driveway to a better space.

It's been one year and everything is coming in nicely. 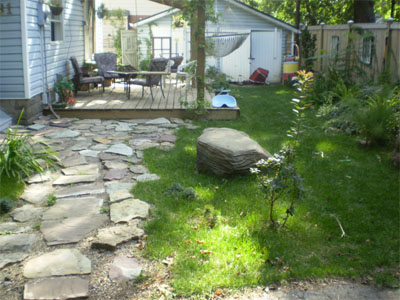 We got a great rock at a garden centre and an awesome outdoor piece from Hamilton artist, Pat Foss. 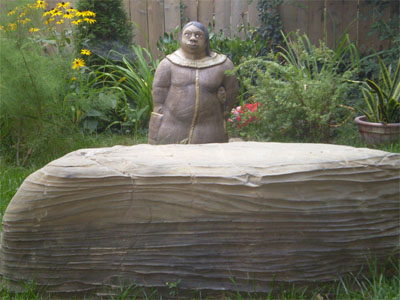 With the help of my genius friend, Jim, we built a little waterfall using wood and Plexiglas. I took an old garden hose, cut it, drilled holes in it, and ran it up the house. If you look closely, you can see the duct tape helping to seal the end of the hose. Red Green would be proud. 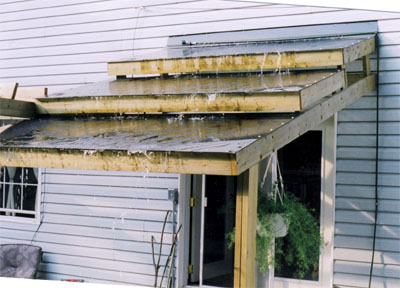 I used some of the broken concrete at the base of the waterfall, for the water to splash on. 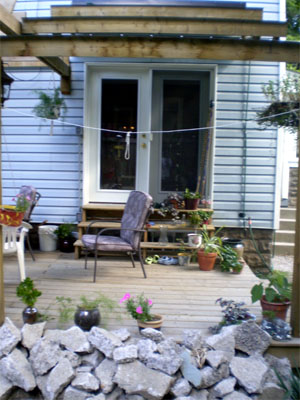 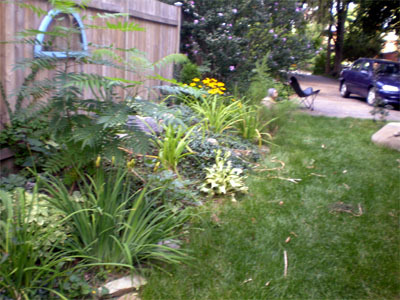 Not that grassy knoll

We took an old washing machine and converted it to a cooler with a great capacity (for fun and beer) and used old windows, tools, and vines to spice up a dull fence. 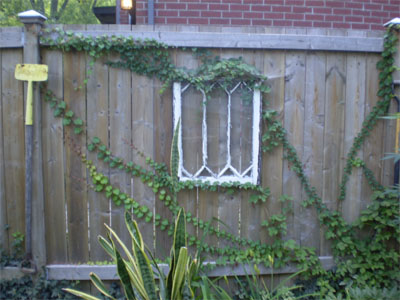 Spicing up a dull fence

I could write about hobo ingenuity, my speciality.

I could write about Gary Bettman of the NHL. I've been a hockey fan all my life, but Bettman is turning me off his vile business. Bettman's anti-Canadian stance is akin to racism, the horrors of which have been written about extensively. I live in Hamilton and many of my friends here are sick of his mistreatment and have become fans of the Raptors.

I could write about Karma. I don't know if I believe in God or not, but I believe in Karma and Karma has a nuclear warhead destined for Gary Bettman's NHL. It was launched in Hamilton (near my house). The league is doomed to crash like the housing market.

I could write, waxing philosophically, of course, about Conrad Black who's been stepping on land mines, lately, too. Life could never have been kind to poor Conrad. No one tried harder to be someone else. His cultured, powerful rich-guy shtick is surreal. I imagine Conrad going to bed each night, pulling the covers over his head, and crying himself to sleep.

I could write about American politics. The Bush administration should be in jail. Anyone who voted Republican in the last 2 elections should be prohibited from voting for 20 years and must do 500 hours of community service in Iraq, helping the victims of their stupidity recover from the horror of Bush / DICK.

I could write about music. My older brother, Danny, just gave me a Chris Knight CD and it hasn't left the player. "Dirt" is a perfect song. Danny has introduced me to lots of music over the years; Paul Weller, John Mellencamp, Bob Seger, and Fred Eaglesmith, were particularly well received.

I could write about my brother; he's a good guy. He answers his phone, "Homicide." It's so funny I do it now. 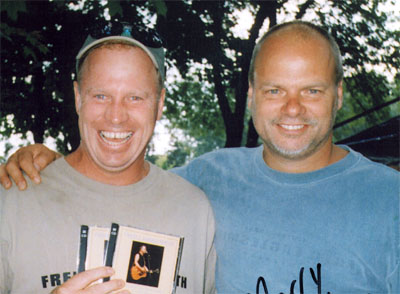 This is a picture of Danny with Fred Eaglesmith. (Separated at birth?) He has just bought two CDs, one for me and one for him. I told you he was a good guy. Ladies, he's single and looking to mingle.

I spent a lot time this summer putting together a magazine with Fred called Hobo. It's been a great experience and I learned a lot. Edition 1 of Hobo's should be out soon. I hope it's a huge success. I could write about that.

I could write about Fred. I've long been a fan of his music and his dedication to change. Fred writes all own his music and (great) lyrics. He sings and plays guitar on stage, but on his CDs he also plays a plethora of other instruments. Fred runs his own record company, records and sells his own CDs, books his own shows, and drives his own buss.

More than anyone I know, he has omitted the dreaded middleman. When a hydro pole on his farm fell over several years ago, Fred built solar panels and a windmill and took the property of the grid. Let's see Dalton, Gore, or Suzuki do that.

I could write about the sham / scam of environmental concern emanating from boardrooms around the world. Collusive governments and big industries aren't interested in the environment. As Bob Marley said, "Don't let them fool ya." If they were, I could go to Canadian Tire, buy windmills and solar panels, take them home, install them, then run all my appliances, heat or cool my house, and charge my car.

Never mind selling excess power to some sleazy electric company or any other cockamamie scheme. Let me generate and use my own power for free or I'll start a revolution. I've written about it.

I could write about revolutions. History books are full of people fed up. Parisians, who still consider being rude and B.O. fashionable, rarely have good ideas, but the guillotine wasn't bad.

I could write imaginary conservations between fed up Frenchmen in Paris (or Ottawa) that lead(s) to the birth (resurgence) of the guillotine.

In French: "Here's an idea. Let's cut off their heads in a public place. Everyone could come out and cheer. It'd be a big party. My buddy, Guillotine, can make anything. I swear, the guy is a genius. We could have a tailgate first."

"Brilliant! Let's do it. Call Guillotine and tell him to make his contraption big and theatrical."

I could write about packaging. Do shoes really need to come in a cardboard box and a plastic bag? I buy trees to, ostensibly, save the planet, but they come in plastic containers that the recycling truck won't pick up, so they go in the garbage. Me and my trees will be compost long before the thick plastic begins to decompose. Everything is a moral dilemma. I could write about that.

I could write about Senator Larry Craig. Always treading with trepidation, I hate going into public toilets for their intended purpose. My plan is touch as little as possible and get out at record speed without taking a breath. I can't imagine skulking around in the gagging stink, wearing a suit, and plotting to have gay sex with a stranger on a toilet. Vote Republican!

I could also write about Don F., who smells bad and fakes toe injuries for attention.

some people will do anything for attention!

That's the freakiest waterfall I've ever seen... And how the hell did you score an 8 week vacation? I want your job... :)

I can understand the poisoning! The entire time I am reading, I'm thinking, I work with Dennis Miller. Quite the rant! (but loved it!)