A journey through the Hamilton part of the Brantford - Hamilton rail trail, the one that follows the old TH&B line, but does not officially exist.

But the name is somewhere between a bit optimistic and downright dishonest. When you get to the Wilson Street Bridge, watch out, because just 0.3 kilometers east into West Hamilton, the trail ends abruptly.

This article pictorially explores a journey through the Hamilton part of the Brantford - Hamilton rail trail, the one that follows the old TH&B line, but does not officially exist.

We begin at the Glenside trail through Chedoke Golf course, traveling westbound in search of the official trailhead. 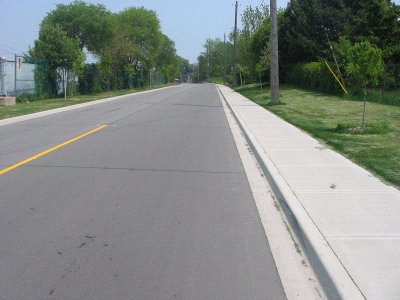 To get to the trail, there are a few entrances to the CPR yard off of Studholme Road (above, recently redesigned as a raceway for cars in typical Hamilton fashion). 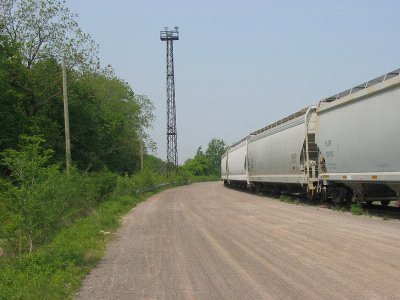 This is the right place, just watch out for trucks and trains. Rumour has it that the CPR is planning to donate the use of their land for a rail trail, though no word of when that might happen.

In recent years, they seem to turn a blind eye to cyclists. I've been though the yard hundreds of times without a word from the crew. Just don't do anything dangerous. Remember, it is a working yard (and it's less dangerous than getting hit by golf balls, appparently). 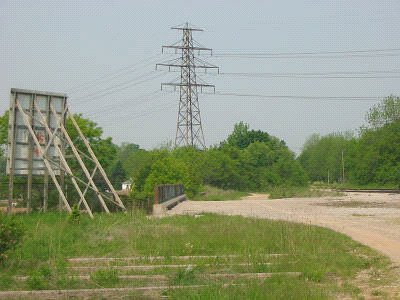 Some might think the scenery is lacking. Mark Fenton is probably not one of them. 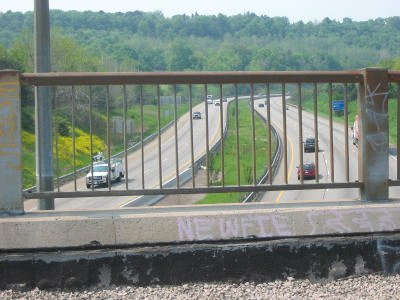 The blue sign says "You are entering the greenbelt". Denis Corr of Clean Air Hamilton recently measured the highest nitrogen oxide (NO) pollutant level ever recorded in Hamilton on this stretch of climb. 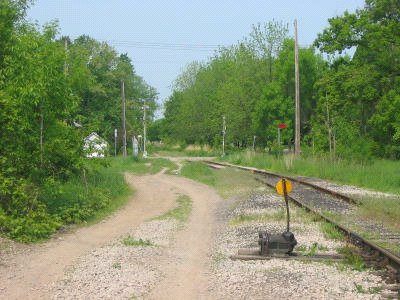 This is Stroud Road, the most eastern part of Ainslie. This is the shortest, fastest and in my opinion, safest cycling access from Kirkendall to McMaster University. 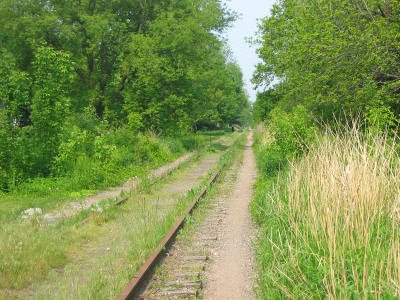 The trail is obviously well used by locals. 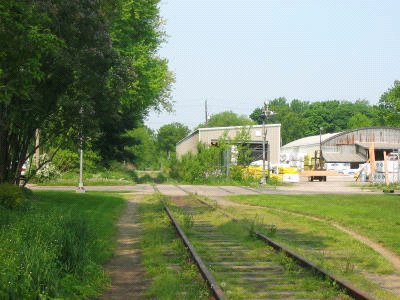 Once upon a time, there was no Home Depot. Use it or lose it! 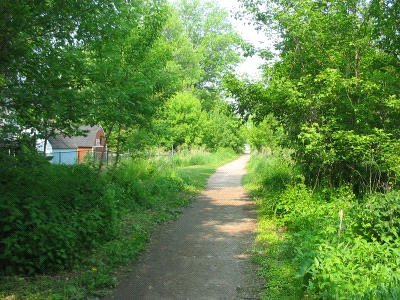 It is ironic that homes once backing onto a noisy train track now have a lovely trail and a place for flower and vegetable gardens. One day, highways will be like this too. 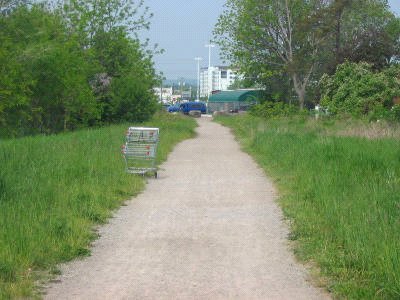 But all good things must pass. Let's look back for a second and take a deep breath, because pictures can say 1000 words! 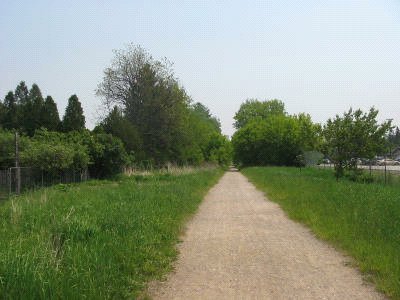 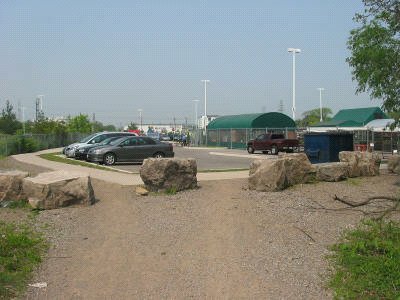 The ancient stones of Rifle Rangehenge. Hint: if in doubt turn right. Maybe. 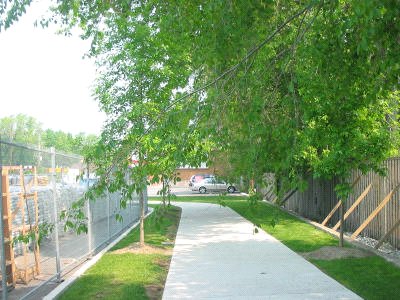 Duck! Yes, this is the trail. Isn't it obvious? 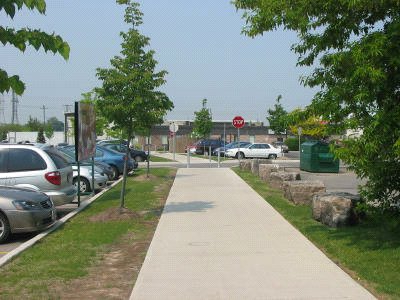 Designed for cyclists in the best Hamilton tradition. 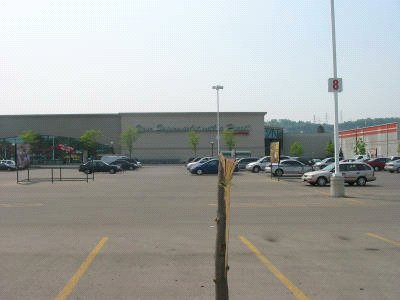 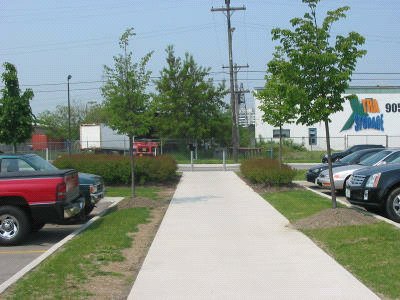 Now what? If in doubt a second time, turn left. 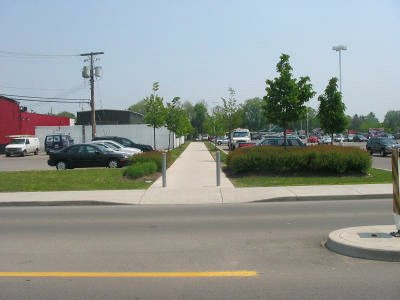 If you want to find it from the west side, it looks like this. No word on whether one should dismount and walk, or just ride on the trail, if it is a trail.

Did you notice a sign about this that I missed? I am thinking that the city is too embarrassed to admit that this counts for urban mixed use planning by putting up a sign. 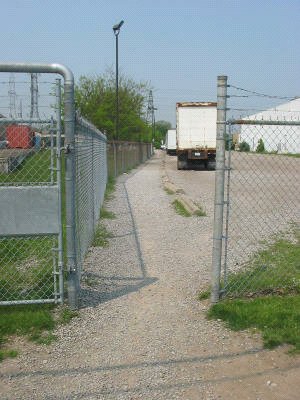 A quick jog left and right brings you to this precariously narrow trail. If there is any other pedestrian or cyclist, you will have to dismount. 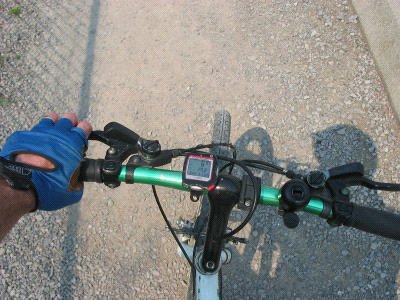 Watch to avoid wiping out on big round loose gravel. 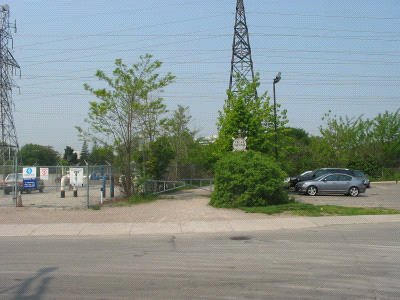 Congratulations, this is it! If my directions though that labyrinth were too confusing, you may need help from a satellite map.

This shows the bright concrete path in all its glory, and the parking lot that interrupts the old TH&B line like some huge asphalt alien defecated on it. 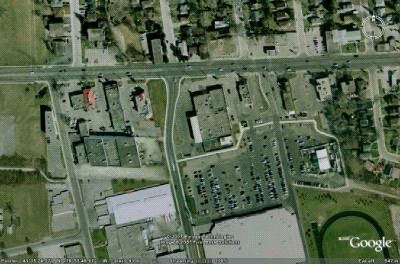 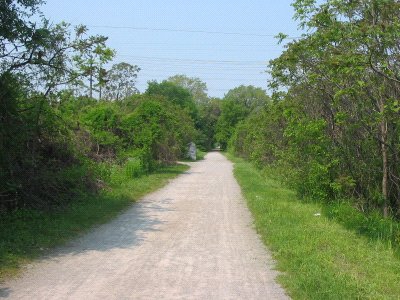 You're right. I'm confused. The Google pic doesn't really enlighten me. Even a few street names or easily identifiable reference points would help.

Now can you get me from the end of the trail at Corktown to the start near Dundurn in an interesting fashion?

Thanks for that map link Barry, that is precisely the route.

Alternatively, the trail can be bypassed for example by Stroud - Royal - Emerson -Whitney - Rifle Range, westbound. These streets are very low in vehicle traffic usually.

The key benefit for cyclist safety is to use the CPR bridge to avoid the racing traffic hell of Aberdeen and Longwood.

That entire Fortinos -- and especially the parking lot -- is a travesty.

You know... I used to do my shopping at that Fortinos and always wondered why there was a half-assed stop sign with another sign that says "Watch for Cyclists" in the middle of this slab of parking lot. I would always stop, look around and think, "what self respecting cyclist would want to ride around here in the first place." They certainly did a good job of ruining a good multi purpose trail while giving the impression that they gave a damn.

One of the things my family and I like to do is what we call "swimming in stones." We put on all our gear and ride into the big loose gravel just West of Fortinos. The idea is we see who can stay on his or her bike the longest. My eldest daughter usually wins cause she's got the best treads on her bike. We always land different places--sometimes on top of each other--and the person who stays on longest is the winner and the person who goes down first has to buy the ice cream. The kids say it's better than the ball room at IKEA and although I shouldn't speak for my partner without checking first I sense it brings us closer together. Try it in rain and you'll go down faster but the stones make a cool "isch...isch" sound under the rubber.

While the Fortinos is a hideous obstruction (and also I miss the far-cheaper No Frills that used to be there and obstruct less), the city has done a decent job of protecting riders at the paved crossing.

In the pic above "Designed for cyclists in the best Hamilton tradition." What the motorist sees when they arrive at the crossing is: 1) a stop sign 2) a "watch for cyclists" sign 3) a speed bump, and 4) warning lines on the road.

While the fact that the Fortinos Parking-lot crossing is necessary at all is disappointing, the crossing has been improved heavily.

Here's my engineering drawing for what they should have done:

In case it's hard to decipher the technical terms of the drawing, basically they should have had the trail pass by the front of the store, with pedestrian crossings across the trail with poles along the trail there so that nobody on the trail can go too fast.

So they'd have moderate speed bikes and pedestrians between the parking lot and the store, and trail users only have to cross rifle range and then they don't encounter any cars until the next road crossing.

As it is now, trail users have to navigate across several parts of a traffic laden parking lot ... and along the front of the store they have a driveway so shoppers have to cross a vehicle traffic lane to get from the parking to the store. Insanity!

Don't shop at Fortinos, they support cheaply made Chinese crap that doesn't work when you open the packaging. Then you're locked into an end user agreement where you can't return the item to Fortinos and actually have to pay $6-7 postage to send it to what you assumed was a reputable company. Gotta love NAFTA and end user agreements folks... I'm not an old prick, I'm actually 21... and this has happened on more than one occassion to me. It's about time we get some manufacturing back in this country... The reason businesses leave is because people request high wages... But I think any person with a brain can figure out that people NEED high wages to offset inflation which occurs because of corporate welfare, reckless money printing, and high oil prices. Fix all those components and we're back in Canada again... the way this country was meant to be. Bottom line, Fortinos has no heart and neither do the clowns in the U.S Federal reserve who not only devaluate their own dollar, but our's in effect too.

Um, now much manufactured stuff are you buying at the grocery store? Maybe that's your problem.

I live on Stroud and walk this 'trail' regularly - both eastward and westward.
I also use the trail to go to that very Fortinos and have grumbled many times to myself about the hideous planning there.
So glad to find I'm not alone!!!
Paula G.

As a resident of Ainslie Wood North, I regularly access the Rail Trail via the "Cycle Route" that runs up from Dundas along Cootes Drive, then along Sanders Blvd, eventually crossing Main St. to link up to the Rail Trail. Having pedestrians and cyclists (many with children in tow) cross 5 lanes of Main St. unassisted at West Park Ave is an accident just waiting to happen. Each time I try to make this crossing I curse the city for not installing a cross walk.

I rode the trail from Corktown to LimeRidge Road. Great trail. You are lucky to have this trail.

I did past a weirdo on a motorized scooter and wondered why the parking at Corktown is only for 2 hours. I wanted to ride further but had to get vack in the 2 hours.

The corktown park trail is actually different from the one in this article - this one starts out by the old CNIC and continues on to brantford. Hopefully they link them sometime!

The parking at Corktown park is time-restricted because it is so close to the hospital, and hospital employees who choose to drive to work are always attempting to find free neighbourhood parking because the hospital charges too much. I guess they didn't figure parking costs into their calculations when deciding that driving to work was the best transportation option!

Anyway, we are very lucky to have so many trails in Hamilton, it's part of the reason we're the best city in Canada :-)

I think I saw you this morning at corktown park. You were riding three people to one bicycle, right?

Richie, I don't know what you are buying at fortinos that you have to return so often , but I've returned several things there over the years and never had a problem. Even without a receipt! The store is great but the trail portion is terrible.