It's clear that people are desperate for something to do - together.

I wrote a few weeks ago about the impasse along Toronto's waterfront. The absence of any meaningful progress here means that a city like Hamilton has a real opportunity to forge ahead and outdo its illustrious neighbour.

HtO is billed as an "urban beach." It's "the best thing to happen to the waterfront in decades? declared the Star's Chris Hume, in his Friday column.

I decided to go and check it out for myself.

A Mad Crush of People

Hopping aboard the free ferry at the foot of Parliament - put on as part of the ten-day Luminato festival extravaganza - my family and I alighted at the Harbourfront stage and were immediately caught up in a mad crush.

Outside of St James Park, Newcastle, or Anfield Road, Liverpool, I have never seen so many people squashed into one space.

A Trinidadian reggae band was tearing up the stage at the front, stilt-walkers were strolling up and down to my left, and everywhere in between were street vendors, buskers and everyday Torontonians standing, watching, dancing and thoroughly enjoying the sights and sounds of a city springing to life.

Of course, this would have all made for a great picture - right? But, as usual I forgot my camera, so you'll just have to take my word for it.

After battling the crowds for 20 minutes we emerged into the urban beach where we met up with some friends and commandeered their camera. 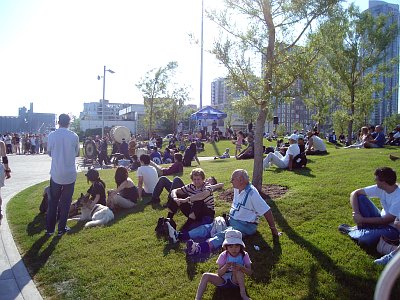 30 Years in the Making

HtO has been, according to Chris Hume, 30 years in the making.

Protracted planning committee approvals, never-ending budget deliberations and a myriad of legal wrangles ranging from 'what if someone puts razor blades in the sand?' to 'people will climb the umbrellas!' threatened to forestall the beach development forever.

If it took 30 years for this modest stretch of urban park space to appear, Hamiltonians should take note. If we want a brighter future any time soon, we'd better start now.

A Beach with No Swimming

The first thing that strikes you about HtO is its unusual layout. As a an ex-soccer friend of mine remarked after I bumped into him playing with his kids in the sand, "it's weird sitting on a beach but not being able to swim."

Of course, swimming in Lake Ontario - along the Harbourfront stretch at least - hasn't been an option for decades, unless you're drunk and you fall in.

It seems strange these days even to contemplate it. Yet HtO has somehow managed to make a vista out of the lake and, sitting as you do, in the stretch of sand that lines the length of the park, you are forced to ask, "why not?" 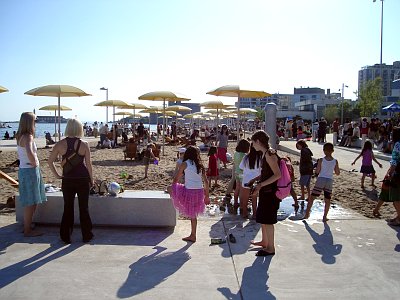 HTO Beach: a giant sandbox filled with tall umbrellas. It might look strange but the kids love it.

At the back end of the park are a series of grassy knolls, little undulations adorned by trees and occasional Muskoka chairs.

As you sit there reading your book or watching the kids at play, you can't help but notice the furious pace of the Gardiner, racing by before you. It's a dramatic contrast the tranquility of the lake on the other side.

I suppose this is what RTH editor Ryan McGreal might call a "perfect juxtaposition" (and yes Ryan, I still hate that word!). 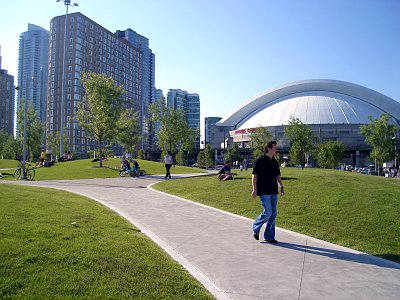 HT0 Park, Toronto. Nice landscaping, but where are the Teletubbies?

People Places are In Demand

Overall, the beach is undoubtedly a success. My camera-loaning friend wondered if the park would have any staying power as a people place, or if it would, instead, 'be ridiculously packed all the time'.

This remains to be seen. If anything, after our people crush experience getting off the boat, I would guess the latter, but either way, judging from the way my fellow Torontonians appear to have eased into their latest people place addition - it's as if it was always there - I have no doubt the beach will be an ongoing success.

And why not? After all, if one thing is abundantly clear to me after my frequent visits to the Waterfront, and my recent trip to Toronto FCs BMO Stadium - where I was told that the tickets were sold out "forever" - people places are in demand.

I'm more certain now than ever that people are desperate for something to do - together.

Of course we at RTH have be saying this for years, but it still remains to be seen what else our political leaders are going to do about it.

Let's hope that whatever comes next, it takes them less than 30 years to do it. 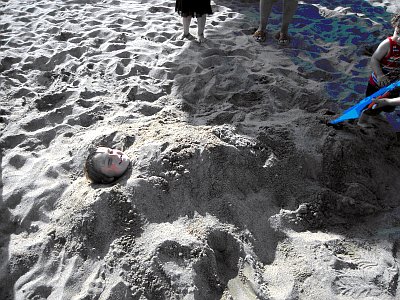 Some beach activities are universal. Just a few more scoops ought to do it...