Art in the Customs House

The subject and style of Kim Burke's art are complemented nicely by the unconventional space: urban renewal at work.

Kim Burke is a visual artist relatively new to the Hammer. She has moved around a lot in the last 12 years and considers Hamilton a fine place to live. 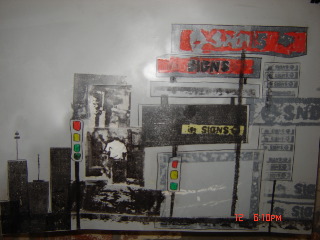 Kim, along with Tom Lowe, has a small show going on at The Workers Arts and Heritage Centre in The Custom's House, at 51 Stuart St., in Hamilton's north end. The art and the building are both interesting and worthy of a visit.

The Workers Arts and Heritage Centre is dedicated to preserving and teaching the history of working people in this country. The magnificent building was completed and opened in 1860 to deal with the shipping and rail traffic going through the area.

In 1887 the Customs Department left and over the years the building has been put to a lot of uses: school, flop house, and vinegar factory among others. It has been neglected almost to death on a couple of occasions, but the grand Italianate structure still stands. Unlike tinny City Hall, The Customs House was made to last.

The Worker Arts and Heritage Centre is a humbling place to visit. As the pictures show, Canadians, some really young, actually used to make things under less than perfect conditions.

The building is also part of Hamilton's Ghost Walk because the Custom's House is supposedly the home of a spirit. Since 1873, the "Dark Lady" has been freaking people out. check out their website for a full history.

Fortunately the structure is now a designated National Heritage site and the Dark Lady is safe.

Kim Burke is originally from Perth and has been active in art all her life. Having worked in an art's supply store for along time, she has had the opportunity to experiment with a variety of material and tools.

Her show at the Centre is a collection of mixed media cityscapes on drafting film. Repetition and patterns are overriding themes in the 16 pieces in the show.

There is a sense of watching urbanites perform the grand, well-choreographed commute in Burke's work. It's like you're looking at a busy train station from a balcony, which is the intended effect. This is from her artist's statement:

I am inspired by architecture and film the most; and people as well I suppose. The lack of natural colour on the roof tops of cities and the general grayness of those cities is something I go back to time and time again although it is not a sad grayness for me.

Although I've called them "new" works, these recent pieces are actually images that have traveled with me through much of my adulthood as I have; finally ending with seven pictures that reflect my interest in the repetition that make up the urban spaces around us.

Having lived in 8 different towns and cities in the last 12 years and having moved 10 times, I have a mental film reel running in my head of images that are decidedly familiar to me but meld together allowing them to no longer present specificities of any at all.

Combining the characteristics of these places provides a narrative that represents not only those memories but other elements that are important to me: the process of making them and the materials used.

I love the forgiveness of the drafting film and how things like watercolour and oil stick lie on top of it; the marks charcoal and graphite leave once you've removed them. I try to layer to form visual depth and repeat images to create a visual impact that for me becomes a series of 6 fairly accurate cityscapes.

The show is in the basement of the old building, where there is also an art school. On the Saturday day I visited there were plenty of budding Rembrandts coming and going. 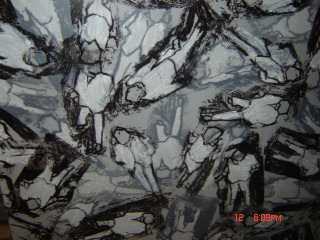 Burke's images are hung in an old, rock-walled room that used to be for storage. The subject and style of the art are complemented nicely by the unconventional space: urban renewal at work.

Tom Lowe has six pieces in the corridor. They were painted in Hamilton on evenings when he'd gotten home from a long, tedious commute to Toronto. "Painting helps reclaim something the commute takes away," he said of his work.

This is the first guerilla art exhibition in the space, but there are sure to be more. The last day of this show is Saturday, June 9, so check it out.