Hamilton's lowest income earners are renters, but they pay among the highest property tax rates.

There was a time, not too many years ago, when tenants in Ontario did not have the right to vote in municipal elections.

People who rented their homes were not considered to have a stake in the community because they were not property owners, and thus were prevented from having input into municipal decision making. Tenants were even barred from holding office.

When a young Robert Morrow, (an up-and-comer who would go on to become Hamilton's longest serving Mayor) was first elected to City Council in the late 1960s, he was disqualified from taking his seat at City Hall because he was not a 'property owner'.

The right of tenants to vote and hold public office has since been recognized and enshrined in legislation, but many municipal policy decisions still seem to be representative of an old mindset that believes the voices and concerns of tenants aren't really that important.

Close to one-third of Hamiltonians live in rental housing - but as a group tenants are economically fragile, politically vulnerable and significantly underrepresented in municipal decision making.

In Hamilton, no sitting City Councillors (with the possible exception of Bob Bratina who owns one property and rents another in his Ward) can be identified as tenants - all are homeowners.

Hidden in those numbers is the fact that many renters earn significantly lower than the average and are often left with difficult choices about whether to pay the rent or go without food or utilities. 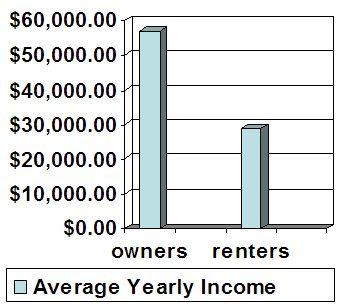 On average, tenants contribute a far greater percentage of their incomes towards housing costs than do homeowners, with 14,200 renter households in the City paying more than 50% of their monthly incomes towards rent.

Many tenants do not realize that they pay for municipal services through their rent. In fact, approximately one fifth of the rent tenants pay goes into municipal coffers.

Tenants don't see their building's annual tax bills and may be unaware that they are indeed paying a tax rate that is three times higher than the 'residential property tax rate' their neighbors in the bungalow down the street are levied.

An even greater disparity is the tax rate differential between owners of condominium apartments and renters of apartment units.

One particular example stands out: a one bedroom rental apartment in a high-rise on Charlton Avenue East pays $579 in rent plus hydro, contributing $1389.60 per year in municipal taxes.

Right across the street, a comparable one bedroom condominium apartment at 150 Charlton East paid $841.21 in municipal taxes last year according to City tax records - a difference of nearly $500.

If the multi-residential tax rate was lowered, by law, landlords would have to pass on those reductions to their tenants through decreased rent.

That is money that could be instrumental in assisting low income tenants with high costs of living and perhaps help relieve Hamilton's staggering poverty rate (the highest urban poverty rate in the province).

The campaign, entitled "I'm a Tenant and I Vote," encouraged tenants in Hamilton to participate in political discourse and exercise their franchise.

While the first two recommendations have not yet been addressed, City Council recently established a committee to review multi-residential taxation and tenant services.

There is hope that the committee will be able to report back before the 2008 budget on ways to ensure greater tax fairness and encourage more participation from Hamilton's tenants in the political process.

Tom Cooper is the Director of the Hamilton Roundtable for Poverty Reduction.

I've lived here all my life and seen at least six administrations, including the present one strike committee's to address the lop-sided taxing issue renters face.

The situation has been studied to death, nothing more can be unearthed, trust me Tom I've been at this as long as you, if not longer.

Even when you werte Bill Kelly's bag-man on committee, you didn't get the job done either.

The only way for renters to be treated as fairly as homeowners is being taxrd exactly the same way.

Leaving that requirement up to the owners and their accountants removes any direct accountability our politicians like escaping over and over when it comes to taxing reters three times the rate assessed to homeowners.

This can be done today, tomorrow, any time council decides to put an end to centuries of repressive tax policy. But this is a hard decision that will never see the light of day.

HAMILTON: Get used to it.

The issue of fairness in taxation is receiving a lot of attention at the federal and provincial levels right now, and with good reason. Everyone who pays taxes needs to know that the taxation system is fair to all. Tom Cooper points out that at the municipal level, the taxation system is grossly unfair to tenants, many of whom cannot afford to subsidize homeowners. It's about time fairness in taxation made its way to the municipal leel too

Actually the city sends out a letter yearly to tenants that gives info on property taxes. Admittedly they just divide the total taxes by the number of units in the building. It is better than nothing though.

With regards to the high tax rates, there's a reason no one builds rental apartment buildings anymore in Hamilton.

Is this why Stinson has that complicated plan for individuals buying his apartments as investment properties and then renting them to others? Are the taxes less that way?

No, I think that's both a sales tactic to seek investors (see current lawsuits over the Trump tower to see how well this works) and a way for the developer to reduce his risk in the same way condos do. Condos would bring the tax advantages as the article shows.

The reason Stinson is even in Hamilton is because at 1 King st he also built an apartment hotel, but then failed to understand that these were taxed as commercial properties and ended up loading the buyers with tax rates three times the residential rate. Whoops. Suffice it to say the man can't find work in Toronto anymore. Don't know if he's worked this out.

To randomguy - if this is the reason no one builds rental housing anymore, then why did they ever in the past? Are these tax rates a recent phenomenon?

Sometimes I wonder if this is something you could bring as a Charter challenge.