After a long and doleful hiatus, Jason is back with the best new happenings in the core.

Okay, so the Downtown Update is back. Have no fear: downtown Hamilton didn't fold up and die in its absence (despite the wishes of certain Flamborough/Ancaster area councillors, ahem).

Your humble scribe takes the blame for the lack of updates in recent issues. Has much gone on downtown in the past couple of months?

You betcha. Without further ado...

Two new eateries have opened up in the suddenly resurgent northern strip of 'the strip'. The area from LIUNA Station to the harbour has seen a total of four new eateries open up in the past few months.

Among the newest is Great Big Sea. This East Coast themed pub is brought to the north end by the same folks who brought us Slainte and the new Corktown. Let's hope they plan on losing the pink stucco out front. Some Corktown-style boards would be wonderful.

Further north at James and Burlington St the Route 66 Oldies Café has opened. Drop a line if anyone has checked this place out yet.

Two more buildings are being renovated in the James/Cannon area. No specific word yet on what is to come.

Speaking of James North, if you still haven't made it out to the monthly art crawl, get with it! The March crawl was a blast. I especially loved stumbling across a fabulous bluegrass band in the Blue Angel Gallery.

Also, the open studios in the Vasco de Gama Football building were awesome.

Plans are in the works for new commercial/restaurant buildings to be built along George St from Hess to Caroline. This is part of a large commercial/parking complex that will include a Shoppers and LCBO store.

Sadly, it sounds as though the city is allowing these mega-box stores to skip the minimum two-storey rules recently adopted in the downtown secondary plan.

Perhaps we all need to email our councillors and demand that they stick to the intent of the secondary plan guidelines. Upper James this ain't.

Each time I go for my exercise jog along York Blvd I remember how privileged I am to live in this neighbourhood as I gaze across the harbour at the city's skyline, ships coming and going and the greenspace of Dundurn and Bayfront Parks. The sun setting over Cootes never gets old.

The street itself is another infamous downtown highway, but city council is finally taking steps to beautify [PDF link] this fabulous entrance to our city.

The new flower baskets, banners, trees and flower beds will greatly enhance this fabulous corridor over the west harbour. Now if only one could gaze out across the harbour and see a 400 foot water fountain...

Speaking of entrances to the city, council has approved the construction of a wonderful pedestrian bridge over the QEW near Confederation Park.

This structure will link several important greenspaces and residential areas. Kudos to council for desiring to spruce up our eastern entrance to the city.

Anyone still trying to kick downtown Hamilton is having a tough time these days. Bob Young is investing $4 million into downtown for a new head office for th Cats and other businesses of his.

In case you haven't noticed already this guy doesn't just throw money away. He's a sharp businessman and you can be sure he's calculated his investment before making it. Congrats to the Cats and to the International Village for landing them.

Speaking of kicking downtown, we at RTH have long complained that it seems to be a favourite past-time of the Hamilton Spectator, so I was pleasantly surprised to read this editorial in last week's Spectator.

As we've always said (because it's plain as day to see) the turnaround is well underway. It's not waiting to start. Nice job by Rob Howard.

The Honest Lawyer appears to be doing a smashing business since opening last month. If you love chicken wings, you MUST try the wing buffet on Monday nights - incredible. Once again, more than enough proof of the booming population of young urbanites in our downtown core.

Workers are outside the restaurant building a sidewalk patio on King West. If you've been inside this place, you'll know that nothing is small or second-rate, and neither will this patio. They've been installing large steel beams that I'm guessing with be the fencing around the patio. Kudos to them for helping to animate this horrible stretch of the King St freeway.

This is exactly what this barren stretch needs: more people and a reason to slow down.

Perhaps the folks at Mountain Equipment Co-Op need to quit wasting their time looking for property in Halton or Peel and just get to downtown Hamilton where they belong. If you have no clue what I'm talking about, check out this website and sign the petition.

Despite not receiving an early grant from the city, the Hamilton Artists Inc were able to purchase the former Jerry's Man Shop building on James North. Let's hope they do something very special with this space as a gateway to downtown and James Street.

The city's new articulated hybrid buses are on the road and they look great! 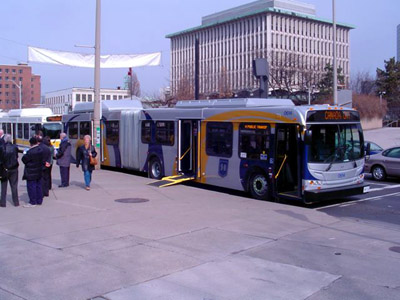 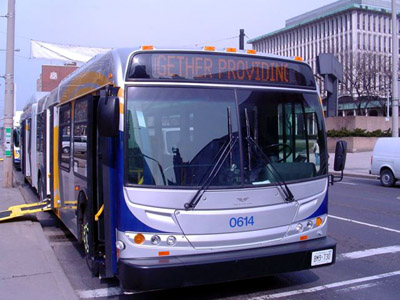 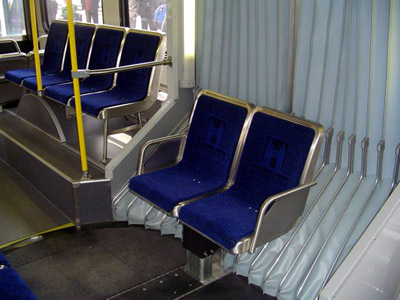 Seats in the divider

Finally, if you haven't checked out the 'new' Main Desserts, go for it. Organic, fair trade coffee, wireless internet and bigger crowds than were ever spotted in it's previous incarnation.

Thanks RTH for bringing back the "downtown update" section--much appreciated.
Northender

Jason, thanks for the update again. I like finding out what is happening and where the City is spending a ton of money. I'm curious though, in the past you've reported these great projects like King William and Jarvis, nothing has happened, 80 King William has to be one of the slowest of all time developments in the world, my suspician is they're going bust as work is on again off again for 4 years now. The new building beside Denningers is affordable housing and at least 75% funded by taxpayers, locally, provincially and federally. I saw on the news last week that the Connaught will be listed for sale for 30 days. Nothing happens at the old Federal Building and HMP although they have had loan committments for years. For that matter same with the Century Theatre. I read the report on this new parking structure, it will lose $175,000 a year to be made up by taxpayers.

Maybe RTH should report on things when actually get built and occupied. I get my hopes up when I read this update only to be let down. BTW, heard that the Caroline and Napier development has only sold 10 units out of 51 in a year.

Great to see this section back. But please don't call restaurants "eateries." It ruins the romance of the food, reducing it simply to caloric intake. Kelsey's and other sprawl-ville roadhouses may be eateries, but most of the places you mention aim higher.

Another brilliant report about Hamilton's bustling rejeuvenation! Thanks very much. Cheers and please keep it up. Tim

There is also a whole lot of nothing going on at the corner of augusta and walnut...

Really glad to see this section back! I 'd also like to find out about the federal building/hmp lot. I emailed Ron Marini, but got the standard 'we're doing what we can' answer. I'm so sick of seeing this site become more and more decrepit by the year. It takes up an entire city block, and it's a few km's from where most visitors enter the city. Does anyone here have any relevent information about this.? Much appreciated.

Sign the petition above and help us get MEC into the fed building!

Condos are upstairs only... nothing determined yet for the main floor as far as I have heard...?

howdy folks...thanks for all the feedback. I guess now would be an appropriate time to pass on relevant info regarding some of these current projects. HMP has undergone heritage assessment and will be restored instead of demolished. Work to begin this summer (remember, sources give appx timelines...these things aren't set in stone) Fed building is tied into HMP and new commercial/parking structure at the next block (between Caroline and Hess). Interior work has slowed down and renovations are to begin by year's end depending on the other two projects on either side. King William/Ferguson - the developer came down with a life threatening illness and is selling the property. downtown renewal will likely deal with their loan sometime soon. Century Theatre - who knows. Trinity Landing - yes, slow as heck City View Terrace - not the best use of that space...the red brick and upper terraces are nice, but with the city's largest fed building and newest hotel at their doorstep they would have been wise to embrace their corner and not leave a huge blank wall. Furthermore, Hamilton loft projects are the big sellers. I'm not sure why people are still trying to build 1990's style condos.

Good stuff, I always thought HMP was a cool building.

Their new one is a huge turd.

I just live up the street from Main and Caroline so I walk by the site daily. Often there are new truck trailors parked inside the back parking lot and on the street.
One day, the gate was open and I asked the fellow cleaning up the back area what was going on. He told me they were starting to gut the place....
There was a forklift there two days ago - not sure if still is.