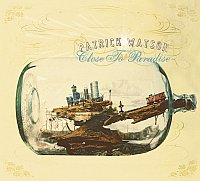 RTH sometimes posts upcoming concerts on the Word on the Street event listing, and I received a notice about the show the band Patrick Watson were playing in Hamilton on February 14.

The promoter suggested a contest on RTH for a free copy of their new CD, Close to Paradise, but I didn't have time to set it up before the show date (although I think it's a great idea for future shows, if any promoters are reading this).

I jokingly replied that they could send me the CD instead (hey, writing and editing for free don't come with a lot of perks). Sure enough, a package arrived in the mail a week later, and here follows the first-ever RTH music review.

Patrick Watson has crafted a dreamy, dizzying album worthy of Pink Floyd at the peak of their career. Running against the grain of decontextualized audio files, Close to Paradise demands to be given its own space, heard in its entirety and studied deeply.

Close to Paradise, the latest release by this Monteal four-piece, is like an expertly prepared paella - loaded with more ingredients than you'd think possible and so densely flavourful that it needs repeated exposure to appreciate its complexity and subtlety.

The music ranges playfully across the genres from space rock through jazz and even cabaret with a rich marbling of electronica, dominated by the interplay between Watson's sparkling piano (think Ben Folds or early Elton John) and a bewildering array of instruments, samples and loops all blended together lovingly and painstakingly into a graceful, well-balanced whole.

The banjo and pedal steel feature prominently, but the sound is anything but folksy. It owes as much to the psychotic brilliance of The Beatles' Sergeant Pepper's Lonely Hearts Club Band or perhaps (dare I write) Brian Wilson's Pet Sounds for sheer audacity as it does to Watson's Canadian indy-rock milieu.

In clumsier hands, things could have gone terribly wrong, but the band finds just the right tension between a busy layering of melodic sounds and a spare, ethereal wash of ambient noise to avoid the sound of clutter or forced artiness.

From the playful melodies of the title track to the dreamy, psychedelic stylings of "Slip Into Your Skin", the jarring tempo changes and guitar work of "Luscious Life" and the distraught, plaintive chords of "Drifting", Close to Paradise achieves the greatness for which its creators audaciously aimed.

I woke up one morning last year to some appallingly banal corporate rock on CFNY and came to a horrible realization: contemporary music is shit, with the inevitable corrolary that this realization marks the moment I turned into an old, sad bastard.

I'm pleased to report that Close to Paradise officially restores my faith in contemporary music. If Patrick Watson had to reach back across several decades of musical history to do it - well, that's between me and my inner demons.

It seems that the underground music scene may finally be beginning to see the light. Montreal has been discussed in endless detail and it is no doubt that this is the city to be watching. Godspeed you Black Emperor handed the flag over to the correct team and it seems that Arcade fire and other fellow Constellation Brothers/sisters are claiming the glory. Hey, Love ain't in vain! Just because your the top don't mean you need to claim all the prizes for yourself. Silver (Mount Zion) ain't bad at all.

AND of Course...If you link THEE Underground to Hamilton (which you should)it won't be too long before the music scene here fully blooms!