The Trouble With Diversity

America is currently obsessed with promoting diversity at the expense of, and as a diversion to, the fact of massive and growing economic inequality.

Walter Benn Michaels, The Trouble With Diversity: How We Learned to Love Identity and Ignore Inequality. Henry Holt and Company, New York, 2006 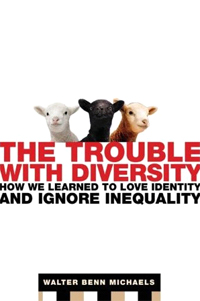 Walter Benn Michaels is a professor of English at the University of Illinois at Chicago, at one of the most ethnically diverse schools in the country. He states his case plainly: America is currently obsessed with promoting racial, cultural and religious diversity at the expense of, and as a diversion to, the fact of massive and growing economic inequality.

For different reasons, both the left and the right effectively collude on this point. The effect is simple: the virtue of the market is unquestioned.

Benn Michaels argues his point effectively and tirelessly. The book is scholarly, littered with endnotes, yet for the most part reads easily. There is a pervasive dry humour scattered throughout which makes for essentially light reading.

I would not make the case that everyone should read this book, although it has appeal if you are particularly interested in American culture and politics. Much of his thesis translates to the Canadian experience, even if we don't have a tenth of America's history of racial discrimination. Neither do we have quite as bad a problem with inequality nor its consequences.

Although I enjoyed this read, you can sum up the entire book's argument in a paragraph, but it is a powerful statement: with his hypothesis, examine everything you see in the news.

How much actually deals with recognizing and addressing the massive problem of economic inequality? Almost nothing. Yet massive inequality is an integral part of how the world views the United States.

Benn Michaels describes the course of American thought about culture and diversity in six chapters of tremendous depth. Ironically, the author extensively refers to but does not discuss in any detail the politics of how the state can correct inequality or any basic revision of economic models.

Neither does he speculate on other reasons why people are so eager to celebrate diversity of race, culture or religion. On this point, I believe there is a more sinister shift going on.

Whether the comfort is derived from belonging to a racial group (you have no choice in the matter), a cultural group or a certain religion (which you are born into but can ignore), this can degenerate into tribalism. This is even true of political parties in recent years.

My understanding of tribalism can be summed up with an example. One of my most vivid memories as a child was watching an episode of The Tomorrow People called The Blue and The Green.

In the show, school children were arbitrarily given blue and green colored badges. Quickly, they began to separate into "coloured" groups and relations between old friends soured into violence.

If you look around today, you find that identifying with a religious group (e.g. Christian, Jewish) is more often about belief than behaviour. In other words, the important thing is belief, not the moral actions preached by the faith. The prize is belonging to the group, not living a life considerate of others.

The same is true in politics, where the partisan line is regurgitated without so much as a single independent thought, the issues predecided without discussion. There is less of this effect with race and culture, but this is only a very recent development.

So I agree wholeheartedly with Benn Michaels, but I think he does not go far enough. We need to reveal exactly why people embrace diversity. Sure, it is a diversion from questioning the almighty faith of Capitalism, perhaps even a politically engineered diversion.

Deeper than that, people long for inclusion in a group and will spare no manner of horrors on others when they feel their group is threatened. That, I believe, is the sad conclusion that even a "radical" like Benn Michaels does not reach.