Tim Flannery's sweeping study on climate change is an absolutely essential read if you want to understand the 21st century's most pressing challenge. 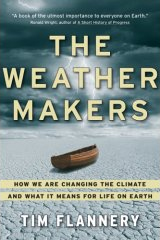 Tim Flannery's sweeping overview of global climate change is not new (it was published in 2005), but it's just too damned important to let that stop me from reviewing it now.

In an otherwise depressing post-Christmas blog, I wrote that the book "delves deeply, fluently, even lovingly, into the beautiful complexity of climate science, teasing out the various patterns and cycles that shape climate and explaining how they intersect over time."

There's too much to cover in a single review, but he explains how climate works in clear, easy-to-understand language, identifying the various cycles that influence climate and how they interact.

Atmospheric carbon dioxide, or CO2, is central to climate control. At the staggering rate that humans are burning hydrocarbons and releasing CO2 into the atmosphere, we are literally overwhelming the earth's ability to regulate its climate.

The Weather Makers documents a planet-wide extinction event in slow motion; or rather, in what looks like slow motion to humans with short lifespans. The rate of decline in biodiversity across the planet is staggering in geological terms.

Popular imagination about climate change tends to focus on 'century' storms, class 5 hurricanes, drowning cities, and other photogenic disasters. Perhaps it has to do with Flannery's background as a biologist, but much of the book focuses instead on algae, plankton, coral, krill, beetles, caterpillars, and other inconspicuous creatures.

Don't be fooled into complacency. As the base of the food chain collapses, disaster crawls up the chain link by link and eventually topples the predators at the top.

As habitat bands recede from the equator, organisms struggle to keep up. Some fall behind, and webs of life are torn when connected species respond to different seasonal cues and 'miss' each other.

Winter moth caterpillars, for example, hatch based on warm weather but feed on oak leaves, which bud based on the number of cold days. Now the caterpillars hatch before the trees bud and have no source of food.

Marine algae is the superweed of the ocean. When nutrients like CO2 and nitrogen pollute the complex but naturally sparse waters of coral reefs, which contain most of the sea's biodiversity, the flourishing algae suck up the available oxygen and block the sun, killing the other organisms.

Fish that depend on the reefs to breed die off and the large predators and marine mammals that feed on them slowly starve.

Between algae, heatwaves that bleach the coral and toxic runoff, most of the world's reefs are dying. As a result, the sea is turning into a primordial soup of algae and jellyfish.

Flannery confronts many of the arguments used to obfuscate the issue and shift responsibility for climate change away from human activities. We often hear that the sun itself is to blame, but Flannery notes that the sun has increased in intensity by 30 percent since life began, and yet earth's temperature "has remained relatively constant."

According to Flannery, the best we can hope for is to reduce greenhouse gas emissions by 70 percent by mid-century; this should stabilize earth's climate, albeit at a higher average temperature than the 20th century.

He lays out the stakes clearly:

Earth's average temperature is around 59 degrees fahrenheit [15 degrees celsius], and whether we allow it to rise by a single degree or five will decide the fate of hundreds of thousands of species, and most probably, billions of people. Never in the history of humanity has there been a cost-benefit analysis that demands greater scrutiny.