'I Cried on The Bus': Local Dance Student Accepted at Juilliard

Despite a lifetime of dancing, arriving at Juilliard was akin to Flora setting foot at the base camp of Mount Everest.

This article is long overdue and I apologize to Flora. I ran into Don Ferguson, Flora's father, this winter. It had been a while and we talked about our kids, as dads do. He told me his son was in computer engineering at Mac. Impressive!

Then, Don said his daughter, Flora, was studying dance at The Juilliard School in New York City. I don't know much about art academies, but knew Juilliard was something special. 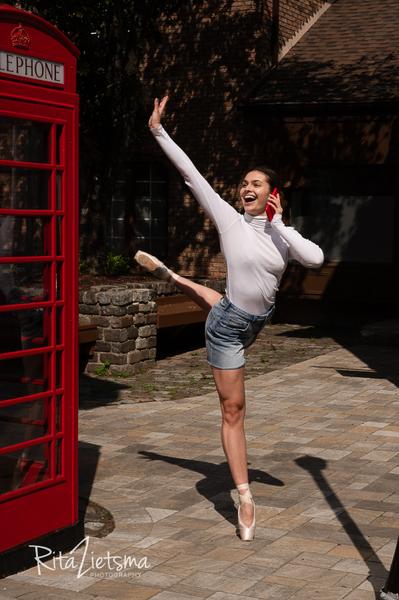 "That's a rare accomplishment, isn't it?" I said.

He said, "Yeah, for their dance program, they only take 24 students a year."

"From around the world?"

According to the unerring Internet, Juilliard's acceptance rate is less than 5 percent and I imagined the dedication and talent required for such an accomplishment: hours, days, weeks, years of training. I was inspired and asked Don if he'd be interested in sitting down for an article about Flora.

He was, so we met at a Tim Horton's in Burlington. A practical man, Don bought himself two coffees. "One for today and one for tomorrow," he said, then mumbled something about microwaves.

Flora, he told me, was loving life in The Big Apple. "She's taking full advantage of the opportunity. She lives close to Central Park and goes there a lot. The Juilliard residence is connected to The Lincoln Center and she works there as an usher." 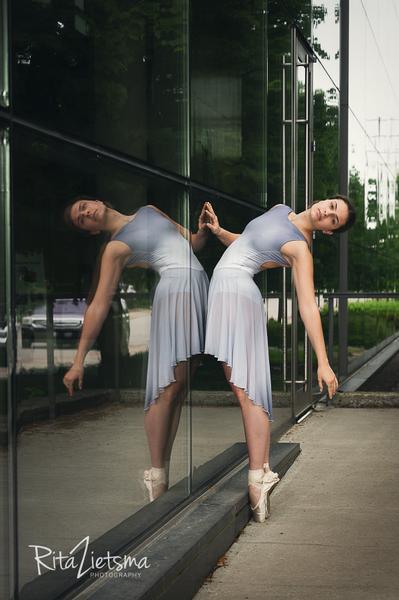 Flora was introduced to dance at two. "She's always loved it," Don said. From the age of four, she's trained year-round as a competitive dancer. About 10 years ago, the family visited Juilliard on a trip to New York. "That sparked her interest, even more," Don said.

Flora's passion never waned and she went to an arts focused high school, Cawthra Park, in Mississauga, two suburbs of public transportation (bus, train, bus) away, where she majored in dance.

In her final year of high school, Flora applied to different art schools, to pursue her dancing dreams. Don said, "Getting into Juilliard is quite a process," which wasn't surprising. After sending paperwork and videos, Flora was invited to the school for a live audition. Mom, Dad, and Flora took a road trip to The Big Apple for the big opportunity.

Potential students are evaluated on different styles of dance, starting with ballet and there are cuts after each round. "Cut, cut, cut," Don said, as he chopped the air, with his hand. As Flora survived round after round, the tension mounted. Don said, "She was excited and nervous, all day." Parents feel everything their children do, times 10, so Flora wasn't alone.

Flora made it to the final / interview round, which was a remarkable achievement. "She was elated," Don said, "walking on air." This didn't guarantee a spot, however, and the wait continued. The audition and interview day was March 1, 1919, and on the 20th of March, she got the unforgettable call. Flora had been accepted into Juilliard, la creme de la creme of art schools.

I asked Don, "What went through your head when she told you?"

We parted ways and I went away thinking about the article: a young woman from Burlington, who'd danced her way to New York; the power of art; the beauty of public transportation....

Not much later, Don sent me an email; Flora was in town visiting and would I like to meet her?

Indeed, I would, I replied.

Monday, March 9, the day after International Women's Day, 2020, I met Don and Flora at the same Tim Horton's. It had been quite a year for Flora. We had a lovely chat and I had planned to tie Flora's flourishing to Women's Day and the heights people can achieve when shackles are off, supports in place, and opportunities presented.

I started an article, then the vulgar virus arrived and changed everything. The time and will to write were overwhelmed and undermined by corona.

So, here we are, months later, more invigorated, memory engaged, and notes out.

Like an enduring, endearing character from a great book, Flora Ferguson is a work of art and meeting her was a delight. My mother is from Prince Edward Island and, 30 years ago, I told her I'd read Anne of Green Gables, someday. Earlier this year, I did. The novel is an amazing feat with an amazing title character.

I should have read it 30 years ago.

Listening to Flora rhapsodize about New York, dance, and Juilliard was reminiscent of reading Anne Shirley gush about Green Gables in full bloom and the endless spectacle the world provides. Similarly, I had visions of Alice marveling, wandering through Wonderland with eyes, mind, and heart wide open.

Like Anne and Alice, Flora is enthusiastic, expressive, and articulate. She oozes passion for her craft. "I've always loved movement. When I was a baby, I would bounce and bounce in my jolly jumper," she said and looked at her dad, who smiled and nodded.

I'm sure Flora danced in the womb.

Coming from an active family, Flora has played a variety of sports. She's an Honours Student and has taken piano and singing lessons. However, "My favourite thing is dance," she said.

"Dance allows me to creatively communicate and illustrate ideas which might not be fully realized with words. Dance can move other people's emotions and ideas, which is tremendously humbling and empowering."

Speaking of moving, I asked about life in New York.

"I love it. There's inspiration all around. I call it controlled spontaneity." She is not a fan of Times Square, but said, "I love Central Park. I go there to walk, read, write, people watch... I like the energy exchange. My dance stems from things around me."

We talked about Juilliard. "Is it as good as you expected?" I asked.

"Better," she said because she's being pushed to new heights.

Becoming an artist is climbing a monstrous mountain. You can't take a bus to the top. You have to get off and dance with the beast. Becoming an artist requires talent, opportunity, scarafice, and an indefatigable work ethic. Becoming an artist means lots and lots of time alone (sometimes, on a bus), practising, perfecting, failing, obsessing. It is in the pursuit of one's craft in which one evolves from dreamer, to practitioner, to artist. It is a slow, lonely, and painful ascent, which few can endure.

Despite a lifetime of dancing, arriving at Juilliard was akin to Flora setting foot at the base camp of Mount Everest. As I'm sure Sherpa Tenzing and the white guy with whom he climbed to the pinnacle of craft and world, would attest to, now the real work begins.

"Yes!" she said. Five days a week, she has dance classes from 10 to 4. "We have academics before and rehearsal after," she said. "It was overwhelming at first. I had a lot of doubt. I was tired, lacking energy, and couldn't produce what I wanted to."

After some soul searching and the support of students and staff, "I realized, I'm meant to be here."

When asked about her teachers, Flora said, "I love them. They genuinely want us to succeed. They are handing off knowledge and expertise to the next generation. The instructors push us hard, but it's coming from a place of love. "

Flora studies music, composition, writing, and different disciplines of dance. "I really like the Graham technique," she said. The Graham technique is named after its founder, Martha Graham. Graham, who danced, taught, and choreographed for 70 years, "reshaped American dance."

I found this quote from Martha Graham, "I have spent all my life with dance and being a dancer. It's permitting life to use you in a very intense way. Sometimes it's not pleasant. Sometimes it's fearful. But nevertheless less it's inevitable," and better understood Flora's connection to her.

Flora said, "My teacher, Terese Caucilli, was a protege of Martha Graham. I love her. I connect to her, a lot. The Graham technique is hard for me, they're not natural movements. It takes the most out me, physically and emotionally, but I get tough love; 'You're going to get it.' Juilliard has teachers, who make us want to learn."

Don explained that Juilliard has a policy that if you get in on merit, you won't be turned away due to financial constraints. Something like an Angel Fund, people can donate to the school to support students. Flora met one of her angelic benefactors, Alice Helpern, and they had lunch. It was a pleasure for both, I'm sure. "She is happy to see me thrive," Flora said.

I asked Flora about the moment she got accepted to Juilliard. She said, "I was coming home from school and I saw Larry Geddes's, the Assistant Directors, name and number on my screen. I answered and acknowledged I was Flora Ferguson. He said, 'Congratulations! You have been accepted into The Juilliard School for Dance Performance.' I cried on the bus. I missed my stop."

She called Mom, Dad, and teachers, to share the joy. Flora was going to New York. From Burlington to Big Apple, Anxiety to Bliss, Laughter to Tears and back, like a magic bus, art moves people.

Unfortunately, Flora's artistic ascension and Big Apple experience has been interrupted by the coronavirus. Just before New York shut down, Flora returned to Burlington, where she continues to study virtually.

This spring, Flora took part in a compilation video of Juilliard students and alumni. Suburban public transit, self doubt, and a global pandemic can't keep a good dancer down.