I Gave My Patient a Tent

Encampments are a symptom of a larger problem: Lack of affordable, acceptable housing options.

In the midst of the COVID-19 pandemic, a debate has been ignited over how best to manage the issue of encampments in Hamilton and other Canadian cities.

I gave my patient a tent.

Last week, a patient that I've followed for two years walked into our appointment with a sleeping bag under his arm and left with a tent. According to Ward 2 Councillor Jason Farr, that makes me part of the problem.

I've gotten to know this patient (details changed to protect confidentiality) fairly well over the past couple of years. He has had a variety of medical concerns, including infections, high blood pressure, broken bones from assaults, and substance use disorders.

In the time that I have known him, he has been through and survived a great deal of physical and mental trauma, and I have often found myself surprised and inspired by his ability to keep going, day after day, one foot in front of the other.

I try my best to see him or speak to him weekly. At times during the past two years he has been housed, and at those times we have made important strides towards improving his health. He struggles to keep a phone, with several having been lost or stolen, and so knowing where he is going to be and where I can find him has been crucial in maintaining this momentum.

Unfortunately, these times of stability have been the exception. The rising cost of housing in Hamilton has been well documented, as has the long waiting list for city housing.

As a single man on Ontario Works, he receives a maximum of $390 per month of shelter allowance. Finding and keeping suitable lodging under these conditions is challenging, to say the least. More commonly, he has been sleeping outside, finding a place to stay wherever he is able.

During these times, his health suffers. It is difficult to continue taking his medications and hard to organize times to meet up and check in. When I am able to find him, I watch as his physical and mental health declines, feeling powerless to intervene. 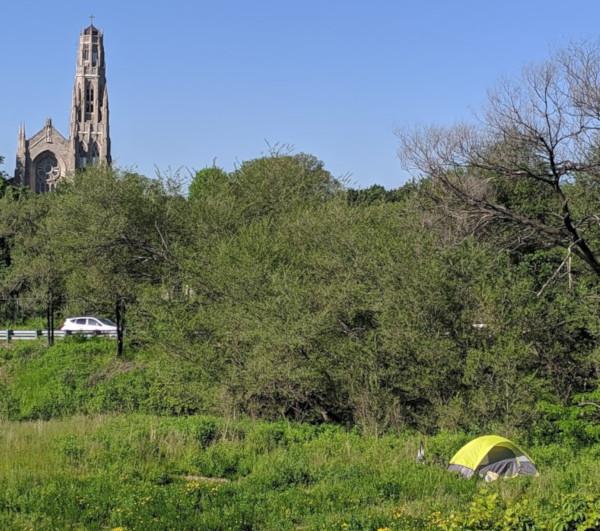 At some point during every appointment, I ask, "where are you staying now?"

"Aw, you know doc, here and there, wherever I can lay my head. But it's hard. It's so hot out, and its hard to be always outside. I can't hang on to my things, I can't get a good night's sleep, and I'm constantly on the move. I just want to settle down."

"What about a shelter?"

"The shelter just isn't for me. I don't feel safe there. I've tried so many times and I just can't stay there. I'd rather sleep outside."

I work closely with the agencies responsible for Hamilton's shelters and I have seen them move mountains to get my patients off the streets and into a place where they can have a roof over their heads. At the same time, many of my patients choose not to or are not able to sleep in shelters and they always articulate very valid and thoughtful reasons for those decisions.

So here we were again. In these situations, I have to force myself to take a step back.

I'm worried about his blood pressure, about whether he'll show up to get his blood work, and whether he is taking his antibiotics.

He is worried about where he is going to sleep tonight, what he is going to eat today, and whether he'll be able to find a place to use a washroom when he needs it.

Most of the time, I don't have much to offer that can address his concerns. I write my prescriptions and he graciously agrees to see me again in a week or two, going out of his way to thank me for the little I am able to do.

On this particular occasion, I added a tent to my prescriptions.

Do I think that in doing so I solved any of the monumental challenges he faces day to day? Of course not. But for now at least I know he has shelter, a place to keep his things, and that he is staying where others are around him, can look out for him.

And I know where he is. If he doesn't come back for his appointment, I know where to look to find him. I still worry about him every day. I hope that this is a first step toward finding permanent stable housing, but I am also realistic and I suspect that there will be further ups and downs on the road ahead.

Tim O'Shea is an Associate Professor in the Department of Medicine at McMaster University and a member of the Hamilton Social Medicine Support Team (HAMSMaRT).

IT sounds like this guy is beyond delousing, a shave and a haircut, new clothes and help finding employment. In that case I would show him how to collect suitable building material and how to erect his own shanty. This was popular in 1933 during the height of the Great Depression, when encampments were called Hoovervilles. Today we could call them Trudeau Towns or Ford's Corners.

This to me seems like a wiser thing to have done since the Plandemic appears set to last many years longer than the Great Depression. A tent, which is a compassionate gift, is only useful for at most three seasons. Whereas a well constructed shanty could be occupied for many years, giving the subject of your project sufficient time to ...

As an alternative to a well constructed shanty, that its builder could take some pride in, there are also plenty of vaccines in area hotels. Hotels are currently experiencing 42% occupancy which is less than what they felt at 44% during the height of the Great Depression. Perhaps a legal clinic could twist some words and make IT appear as though they are all refugees in their own land and get them free room and board. I dunno.

I do know the homeless like to be close to the soup kitchens and food banks which is why they chose to be where they're at. I completely understand that. But the availability of employment is lacking downtown due to the absurd economic destruction taking place at the moment. In 1933, homeless people took whatever work they could find which included fruit picking.

You gave him a tent; Have him pitch IT in a Niagara Peninsula orchard. He might just get lucky, get hired as a fruit picker and have plenty to eat for a season.

An apple a day keeps the doctor away so thanks for sharing, Tim O'Shea.