The Art Gallery of Hamilton Film Series runs on select Wednesdays and Thursdays until May.

The 11th Annual Art Gallery of Hamilton Film Series launched last week with a considerable crowd coming out despite the cold on a night in late January to see The Invisibles. This mostly comedy, with a hint of drama, is based on the novel Sur la Route des Invisibles, Femmes Dans La Rue by Claire Lajeunie. 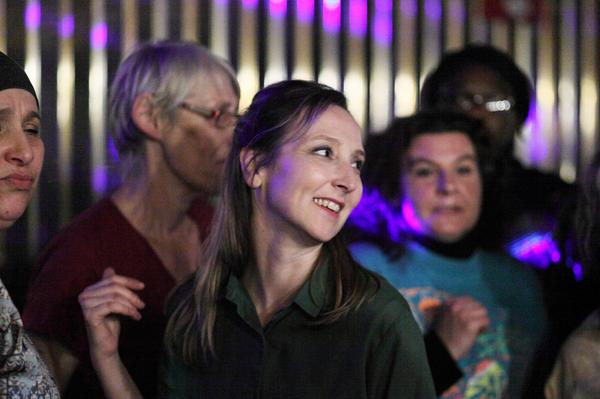 Following a municipal decision, the local women's day shelter has been slated to close on December 31. With only three months left, concerned social workers work to reintegrate the women they care for into mainstream society with the hope of finding them employment that will cover some sort of affordable housing. Nothing too challenging there.

However, a wrench is thrown into the plan when the women are forcibly evicted from their night-time tent-camp and all of their belongings destroyed by those in power. That's when the social workers covertly turn the shelter into a round-the-clock venture incorporating housing, counselling, mock job interviews, questionable references, lots of onsite job training, hiring fairs and the odd romance or two.

The Invisibles weaves together homeless women struggling to survive another day with some semblance of dignity, and the social workers who help them despite harbouring their own trauma and carrying their own baggage, as well as the weight of vicarious trauma that comes with the often-thankless job. These counsellors are desperately trying to help lift these discarded yet deserving street women up by drawing on the women's resiliency and adaptability and by building up their self-confidence. Of course, not every woman wants to be saved.

The music includes the amazing voices of Annie Lennox and Aretha Franklin belting out Sisters Are Doing It for Themselves, and that's just what these women are doing with considerable pride and panache even when things don't quite turn out as expected.

The best part is, if you didn't make it to the screening at the beautiful Westdale Theatre in Hamilton, you can still see some great films over the coming months. The Art Gallery of Hamilton Film Series runs on select Wednesdays and Thursdays until May. This year, there is a distinctly French influence with screenings of the modern version of Les Miserables, Portait of a Lady on Fire and Jean Cocteau's Orpheus, all in French with English subtitles.

These films coordinate appropriately with the show The Artist's Dream: Works of French Symbolism (February 1 to May 31, 2020).

There's also Canadian artist Michael Snow's 1967 film Wavelength, which segues nicely into the AGH show Early Snow: Michael Snow 1947 to 1962 (February 8 to May 24, 2020), as well as The Contemporaries (February 8 to May 24, 2020), which focuses on Snow's contemporaries during his early years in Toronto, as well as his accomplished wife, artist Joyce Wieland.

The feminist film Made in Bangladesh (with English subtitles) focuses on Shimu, 23 who works in a clothing factory in Dhaka, Bangladesh. Difficult conditions at work force Shimu to start a union with her co-workers. Despite threats from the management and disapproval of her husband, Shimu forges on.