It's our responsibility to ensure that Hamilton remains a place that Hamiltonians can continue to live in, no matter their economic means.

I always pause when I'm talking about light rail transit (LRT). It catches in my mind like a net on a hook: is this a project that will do more to set the stage for property speculation and wealth accumulation than it will to improve the lives of folks living in the core?

I use the word living because I think the active form of the word is important. This project, like so many others, talks about the future but fails to reckon with the present. People live everywhere in this city's downtown core. If it has a window it still likely has a person.

In my view, it's our responsibility to ensure that Hamilton remains a place that Hamiltonians can continue to live in, no matter their economic means. It's not a wild idea.

What sort of dismal future growth and prosperity are we imagining for ourselves in a city where "market forces" get to decide who stays or goes?

Equity must be at the centre of the decisions that our City government makes on our behalf and at the heart of every conversation we have about "improvements" (and who they're for). 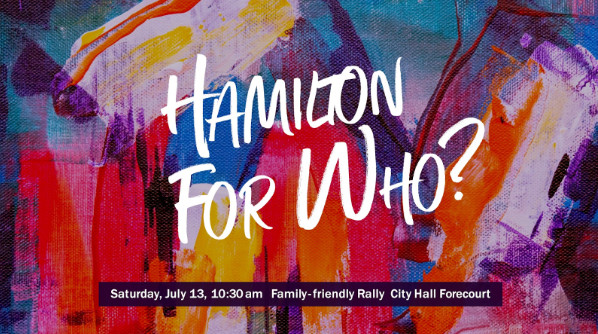 Event graphic for Pride-sponsored rally on July 13, 2019 in the forecourt of City Hall asking the important question 'Hamilton for Who?' (Image Credit: Eddy Edgar)

As it relates to LRT in Hamilton, this exclusivity first started resonating with me when an expert on light rail projects came to Hamilton to give city leaders his advice. He told a room full of people about the pitfalls we should avoid, about the mistakes he'd seen around North America, and about the importance of setting good strategic priorities from the get-go.

At least, that's what I got out of it. I think I might have been the only one, because most of the decision-makers in the room just sort of laughed him off.

The troubling bit: many of his suggestions were related to the displacement of tenants, the shuttering of small businesses, and the lack of infrastructure for folks with disabilities who would need to get around during construction.

Months later, at a much smaller meeting, I asked one of those same decision-makers about the latter and got a "we're working on it" line that told me it wasn't "budgeted for". And so, as a lifelong environmentalist, and someone who cares deeply about the positive impacts of public transit: I cringed.

I cringed because I knew this meant something like the terrible warnings that the LRT expert forecasted: planks of wood extended over unsafe chasms or far-too-bendy plywood that couldn't handle the weight of a motorized wheelchair. I saw the years of consultations with advocacy groups resulting in that classically Hamilton "good enough for the likes of you" model of City-building that we've become far too used to.

I am still a supporter of LRT, proudly #YesLRT, but I'm more than just a hashtag. Somewhere in all this, there was a rally around community benefits and with it the promise of deeply affordable housing. That matters. There was some concrete talk of local work, better transit, and repairs to our long-dilapidated water mains and electrical infrastructure. Yet here we are again.

Whatever this funding transforms into, I beg the City to put equity first. They have extolled, rather virtuously, that they will be applying the great and powerful "Equity, Diversity and Inclusion (EDI) lens" to City decisions. But it's not working and it's not being taken seriously.

We all know that the City has the means to do this but continues to lack the political will.

And, right now, many Hamiltonians are sad, angry, or both. It's been a hell of a year. It's natural, although perhaps hasty, to look at our City for all of the answers when we should be asking why the Provincial and Federal governments haven't stepped up to get this done. There's plenty of governmental blame to go around. This might be another pause in the saga of a thousand pauses or a last desperate gasp.

Or, as has been suggested by Karl Andrus, and which isn't outside the realm of possibility in my mind, this might all end up culminating in a show-stopping let's-throw-in-the-LRT moment for the 2030 Commonwealth Games bid. Gosh, I really hope not.

I am not interested in rallying around anyone who is promising us a future about economic growth and prosperity that continues to leave diverse and marginalized communities behind. There's no equity or justice in that and I'm not interested if it's not about equity and justice. Equity isn't an end game. It's the starting point.

What did more harm to LRT than anything else was letting it be a political yes-or-no question. Its jeopardy meant that in order to see it happen, we had to look away, to turn our backs, and to push ahead. Let's not make that mistake again. We cannot accept "investment" without insisting on equity. There is no either/or. Together means together.