There's No Place Like Home: The Possibility Of Theatre

A little girl who dreamt of being Dorothy grows up to be talented performer, then stars in her own show about finding home and the performance makes everyone feel better by connecting us to the real world.

There's no place like home, but where is it? What is it? Where does a quest for home take us?

Vicktoria Adams's passion for performance and possibility started at home, early. From the ages of three to five, Vicktoria insisted her parents call her Dorothy. She said, "I wouldn't answer to my name, only Dorothy. I called my little sister, who is two years younger, Toto, exclusively." She added (unnecessarily), "I was obsessed with The Wizard of Oz." 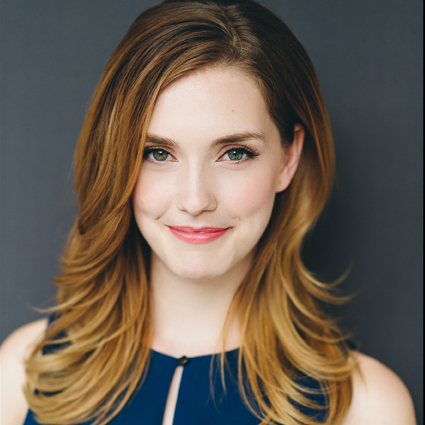 It was the 1990s and her family had a VCR and a tape of the 1939 musical fantasy. After learning to push Play and Rewind, Vicktoria was Oz to the races. "I can't fathom how many times I've watched the movie." She memorised it. Laughing, she said, "It was recorded from TV, with the commercials - McDonald's and pantyhose - so I learned those, too."

Vicktoria is a passionate, compassionate, big-hearted person. She is thoughtful, with a sharp mind, quick wit and a (shockingly) explosive laugh. In life and on the stage, her sincerity shines.

From Dorothy to dinner theatre to Elsa at kids' parties to major productions, Vicktoria has worked a variety of gigs, refining her skills and perspective on entertainment.

A lifetime of performing has shaped her into an immersive, talented, captivating entertainer.

Vicktoria has new, one-woman show, There's No Place Like Home, A Musical Cabaret. She said, "The show reflects how my love of Dorothy shaped my idea of home." 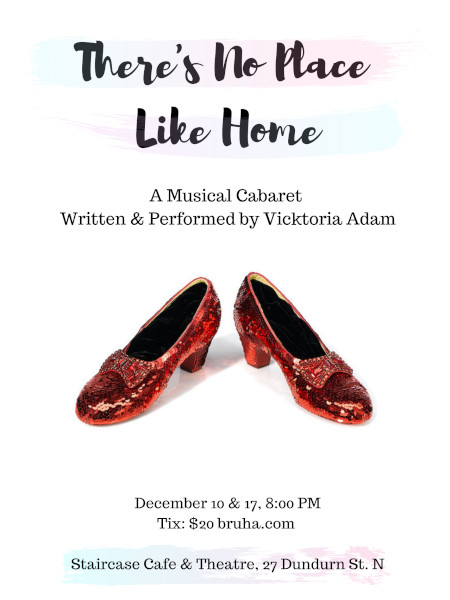 Vicktoria was born and raised in Alberta. "I moved to Toronto when I was 24. I wanted to be an actress, and the New York of Canada seemed the right place to go. Also, I didn't quite feel like I belonged in Edmonton, where I was living."

Then, like Dorothy in Oz, she crashed The Hammer. She said, "I moved to Hamilton for love. In order for Luke (her new husband) and I to live together one of us had to move, and because he had a more permanent job, he won the battle."

"The show [There's No Place Like Home] is my journey about finding home, using The Wizard of Oz, as an analogy." She said, "There's singing, a little dancing, and storytelling."

There's No Place Like Home was obviously influenced by the film, but Vicktoria said, "The movie also affected my world view and what home is; what makes a home."

Such is the possibility of entertainment.

The music for There's No Place Like Home includes well-known numbers, as well as originals and song parodies, which Vicktoria has written. The show has been in development for a long time. "I wrote one of the songs when I was 13," she said, smiling.

Vicktoria is collaborating on the project with her husband, Luke Brown, who is directing, producing, and dramaturging.

A match made in theatre, Luke is also passionate about live performance. As The Director of New Play Development at Theatre Aquarius, he provides an opportunity for many artists to work on their craft in an effective environment. As well, he supports arts and artists by going to more shows than anyone I know.

Recently, I met with Vicktoria and Luke at West Town, ostensibly, to talk about There's No Place Like Home. Lively, informed, opinionated, and quick witted, talking to Vicktoria and Luke is like playing ping pong on a pinball table. The conversation went everywhere, but, like life, always came back to "Home."

Luke said, "I like the piece because it has heart. It allows the audience to join in and sing along. It's not a holiday show, but it fits the theme. The goal is to have a warm, welcoming experience."

When asked who would enjoy the show, Vicktoria said, "Everyone. And, the point is for everyone to walk out feeling better."

She said, "Be the change you want to be. Create the art you want to see," which lead to a discussion on the state of theatre and its future.

Live entertainment requires people to leave the house, get to the venue, (park), spend money, and (potentially) put up with the perfume, phones, wrappers, whispers, gas... of inconsiderate strangers. For a long time, live performance was the only game in town.

Now, as we know, it is competing with technologies that can put the world's greatest games, names, flames, hits, splits, hips, trips, and Donald Trump tricks, on a big screen, in your living room, close to a refrigerator, full of Beer.

Undeterred and passionate about its possibility and continued relevance, Vicktoria said, "There's a human connection, a human element that is only available at a live performance. Theatre can bring people together."

By working with this unique quality / medium, Luke and Vicktoria hope to create a fun, joyful experience at There's No Place Like Home: the type of evening one might enjoy at a gathering of friends. They encourage people to stay after the show and socialize.

You can't do that on television.

There is an overreaching drive for inclusion and pleasure in their approach to the show. At one point, Luke said, "Theatre can be relevant, not by being political, but through the heart."

Who doesn't love a joyful escape?

When asked who he'd like to thank, Luke said, "There are so many people... Colette Kendal, members of the Junction, the local media, Jeff Giles, it goes on and on... so many hands to make a show possible."

Tickets for There's Nowhere Like Home are $20. You can get them at the door (cash only) or in advance on Bruha.com. The performances are December 10 and 17th, at 8:00 PM, at The Staircase Cafe, which is an ideal venue for a joyful, intimate experience. Follow the yellow brick Internet for details.

A little girl who dreamt of being Dorothy grows up to be talented performer, then stars in her own show about finding home and the performance makes everyone feel better by connecting us to the real world... Sounds great.