Despite declaring a climate emergency, the City of Burlington continues to threaten a property that has been naturalized to sequester carbon and support local widlife threatened with extinction.

"By declaring a climate emergency, Burlington City Council is recognizing the magnitude of the challenge we face in combating climate change," Nisan said in a press release. "But it is only one step. Through the declaration, we have requested a comprehensive climate action plan by the end of the year and that plan is where we will begin to make real, practical change for Burlington."

According to local environmentalist Vince Fiorito, "Given the context of the City declaring a climate change emergency, noisy, smelly, green house gas emitting lawn mowers and leaf blowers should be discouraged. Native species-based landscapes that sequester carbon should be encouraged."

A Burlington resident and her family consciously chose to create a naturalized area in their front yard to encourage genetic diversity, support native species, and create an inviting habitat for a variety of insects and local wildlife, but have found the City is not living up to its promises.

Fearing retribution from neighbours, I was asked not to use this resident's real name so we'll call her Antheia after the goddess of flowers. 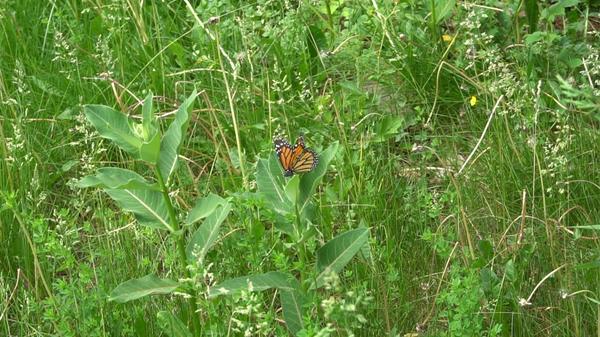 Antheia notes, "I have been maintaining a naturalized area since 2015 and the City of Burlington has repeatedly told me I am in violation of the by-laws despite the by-laws allowing for naturalized areas. Every year they mischaracterize my naturalized area as a lawn and demand that I cut everything down to less than 8 inches or they will come and do it themselves and charge me."

When the City inspected Antheia's property in 2015, it took no action. In 2016, the City inspected the property again and issued a non-compliance notice. Antheia informed the City that she was maintaining a naturalized area as defined by Municipal By-Law #12-2011 as:

a yard or a portion of a yard containing vegetative growth that does not form part of a natural garden that has been deliberately implemented to produce ground cover, including one or more species of wildflowers, shrubs, perennials, grasses or combinations of them, whether native or non-native, consistent with a managed and natural landscape other than regularly mown grass.

Antheia was informed by email and phone that the City would not qualify her property as a naturalized area and that City employees would be cutting her plants down to the required height for lawns of less than eight inches.

When City workers arrived to cut Antheia's naturalized area, she called the police. The attending officers asked City workers to leave the property and they did so without incident. No further action was taken that year.

Then in 2017, without any notice, the city trespassed on Antheia's property while she was not home and decimated the entire naturalized area. Milkweed, wild flowers, native species, many of which were perennials, and a bush were cut to the required height for a lawn of less than eight inches, effectively destroying the portions needed by monarchs, pollinators, birds and small animals.

In 2018, the City made significant changes to the lot maintenance by-law and replacing By-Law #12-2011 with By-Law #59-2018. Antheia retained a lawyer to help City workers understand that she was maintaining a naturalized area. That summer the City took no action.

Discussions with the By-Law supervisor proved fruitful and Antheia was assured her property was being maintained as a naturalized area and was in fact in compliance. Yet one month later, after allegedly receiving many complaints from neighbours, the City sent Antheia a letter demanding she cut everything - all the same plants that were in her yard when the City deemed it in compliance - to less than 8 inches.

Supported by countless research studies and anecdotal observations from native species gardeners, Antheia is absolutely right when she asserts, "Natural deep-rooted plants, like the ones on my property, are vital to helping the climate crisis. The deep roots from perennial species bring the carbon dioxide from the atmosphere down into the soil where it is locked away and stored. Each year I have seen many monarch butterflies drinking the nectar from and laying their eggs on the milkweed on my property. At a time when pollinator species are at risk, the City should be encouraging naturalized areas not trying to destroy them."

Lawns are butterfly and pollinator deserts. But Canadians have been indoctrinated to believe that only a high-maintenance manicured lawn of grass with a few strategically placed continuously flowering, non-native plants is acceptable landscaping.

Fiorito points out, "Landscape design is an art form. The Canadian Charter of Rights and Freedoms protects our right to freedom of artistic expression. The lawn and garden industry creates perceptions of problems where none exist to sell us their expensive solutions, many of which are real environmental problems."

According to Fiorito, it's hard to justify protecting lawns and not naturalized areas, "Given the current global biodiversity crisis and the fact that none of Halton Region's 48 species at risk of extinction require grass to exist and thrive. Supporting lawns that take up space that could be better used to create habitat for local endangered species is hard to justify."

It's time that environmentalists, naturalized gardeners, and those people who want to leave a better world - one where there is hope for a future - to make a stand. Let the City of Burlington know that being given the distinction of being declared the No. 1 city in Canada by Maclean's Magazine comes with responsibilities and that includes living up to committing in full to addressing the very real climate emergency that we are now facing.

One small step to helping our city, region, province, country and even the world, is to not only accept, but encourage residents to embrace naturalized gardens with their low carbon footprints, genetic diversity, monarch and pollinator plants that thrive on rainwater.

For everyone who wants to help save Antheia's naturalized area before the City cuts it down on August 20, 2019 and for those who want to nudge Burlington closer to meeting the meteoric goal of taking a first step to putting the brakes on the climate crisis, here's the email addresses of our City Council:

To inspire those of you who may be hesitant to help out, here's my article from last July when readers from across the country came together to let Burlington know I shouldn't have to remove my milkweed from my garden. One week later, the By-law was changed.