The fight for bodily autonomy must be all-inclusive. If your fight for human rights is not universal, it is self serving and it allows unjust harm onto vulnerable and marginalized peoples.

On Friday, May 24, just over a hundred of us gathered in front of Hamilton City Hall in our pursuit for reproductive rights and justice. I opened the My Body My Choice rally with a broader focus on bodily autonomy. Below is an edited version of my speech. 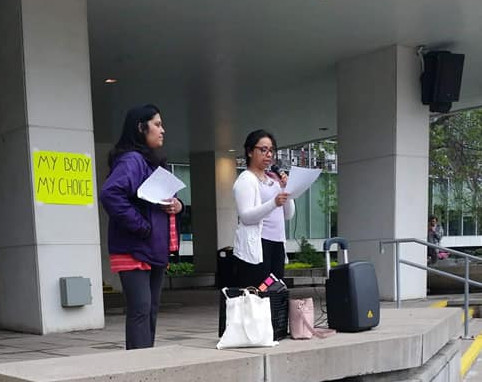 We organized together for this particular rally as a response to what we have been seeing slowly brewing across Canada, the regressive notion that Canada should criminalize abortion. Though there have been people across Canada who have been pushing for criminalization since it became legal, the growing movement now stems from the legalization of blatant human rights violations in the United States.

A few weeks ago, folks rallied together to let the young MPP for Niagara West know that he and his regressive call to "make abortion unthinkable in our lifetime" is no match for us pro-choicers.

As folks tried to stand together for reproductive rights, what unraveled in the Handmaid Local 905 Facebook group became quite concerning. Many of us watched how many white women who were demanding that abortion remain legal and safe were also adamantly shutting down the voices and concerns of racialized women, non-binary folks and trans men, who all have long and traumatic histories of having their bodies controlled through colonialism, racism, and homophobia, which has historically been far more complex than the histories of white men controlling white cis women's bodies.

We cannot ignore colonialism, capitalism, racism, and homophobia on the subject of right to choice and bodily autonomy.

When we say that people should have full bodily autonomy, that having bodily autonomy is a human right, we mean that people should have full control over their body and be able to freely make choices concerning their body (unless it means that your choice will cause public health concerns and outbreaks, making other people ill, such as within the case of refusing vaccinations).

Having full bodily autonomy does not only mean that persons who have a fertilized egg within their uterus should have access to legal and safe abortions. It also means that everyone should have access to safe and equitable healthcare and medical procedures. This includes people who are trans.

Trans persons should have the right to access legal and safe healthcare which includes medical procedures, surgeries, and hormones without discrimination. Folks who are lesbian, gay, bisexual, queer, and two-spirit should not be forced into conversion therapy and should have the right to engage in sexual relationships without violations towards their bodily autonomy.

When we think of reproductive rights, we must also think of trans men who are far more vulnerable than cis women in seeking medical care.

We asked some trans men to speak today, and the response made it very clear that trans folks still do not feel safe and do not feel free. We have a responsibility to create spaces with trans people specifically in mind. Right to choice includes being safe from harm.

If we talk about the right to abortion, we must also consider other aspects under which bodies are controlled.

Bodily autonomy is a human right, a concept that is applied not only to abortion, but also for ending human rights violations such as slavery, female genital mutilation, forced sterilization, sex trafficking, sexual assault, rape, to name some examples.

This is genocide. This abuse of human rights is not something of the past. White Canadians have forcibly sterilized Indigenous women just within the past few years in 2017.

Historically, Indigenous women in Canada have faced significant inequalities in healthcare, including reproductive care. Women living in northern Canada have demanded for better services in their communities, as they had to travel long distances to access basic maternal and infant care.

In the 1960s and 1970s, the federal government learned how expensive it would be to build accessible health services in the north. So instead of building, the federal government decided that these isolated Indigenous women should use birth control, even though birth control was illegal at the time. Some women were given forms of birth control that were not yet approved by the Canadian government. They broke their own laws because they did not value accessible and safe healthcare for Indigenous peoples.

Make no mistake. We are here on Indigenous land, not because we were invited in, but because we forced them to the corners of society and stripped them of dignity, stripped them of their basic human rights, controlled them, abused them, and murdered them. This, at the hands of White colonists of the past and at the hands of today's White law makers.

The right to choice must also include human rights and dignity of Indigenous peoples, with whom we live amongst on stolen land.

If you believe in the right to choice, for the right to legal and safe abortions, then you must also fight for bodily autonomy for black persons.

We have a shameful history in how we have treated black persons. Human rights and bodily autonomy were violated at the hands of White colonists during slavery. black people were auctioned off while chained and likely naked, forced to carry a fetus to term, and were sterilized, all of course without their consent. This paints only a tiny picture of the unthinkable atrocities towards black persons from slavery to now.

We have a history of experimenting on black bodies in the name of medical advancement. Even now, anti-black racism is prevalent in healthcare. Our healthcare systems are less likely to validate pain experienced by black persons, and so are denied treatment and have worsened health outcomes.

Conversations about violations to bodily autonomy must also include the criminalization of sex work, as well as alcohol and recreational drug consumption. We imprison people because they use their body in ways that law makers, who are generally white, older, and male, deem wrong, inappropriate, taboo, and so on.

We also pick and choose who we incriminate and how long they are incriminated. It almost seems arbitrary, but it is not. Decisions are made out of colonial and capitalist mindsets. The law is not fair and the law is not just.

Your fight for bodily autonomy must be all-inclusive. If your fight for human rights are not universal, it is self serving and it allows unjust harm onto vulnerable and marginalized peoples. One should have full control over their body. Our body. Our choice.

Shahzi Bokhari, a bachelor of social work graduate from McMaster University, is a grassroots community organizer who is a co-organizer of the Women's March Hamilton as well as a social justice and racial equity advocate.

Question - if the woman is healthy and the baby/fetus has a beating heart - are you ok with a woman killing that baby because its 'your body, your choice.'? . . . We don't need an explanation of why - is it a YES or NO?