When corporations pay less tax, regular citizens are forced to pay more tax - and the government is forced to cut essential programs.

It's insane that people still listen to politicians like Doug Ford and Jason Kenney when they propose that cuts to corporate tax rates is going to help the economy. We have seen that proven wrong over and over again for most of our entire lives. Corporate tax cuts only ever work to benefit corporations, not you. Not once. 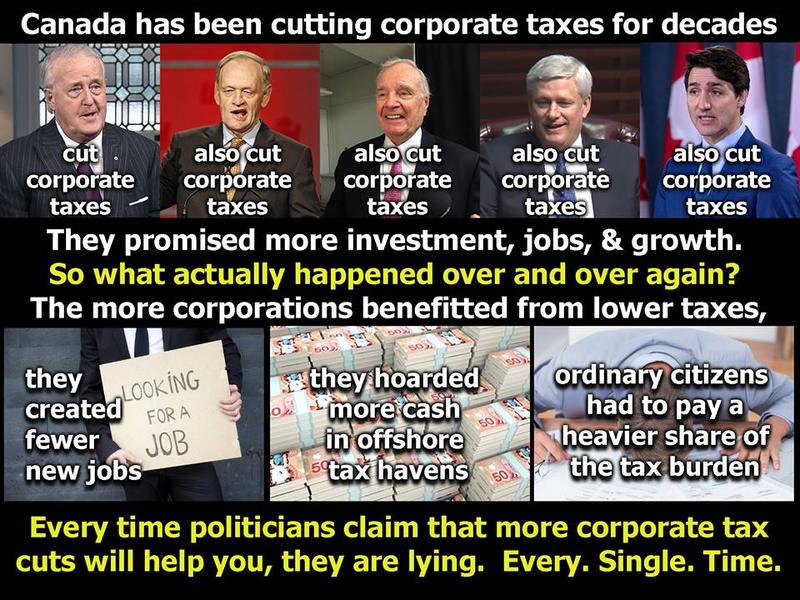 Despite endless promises that tax cuts for business would create jobs, it turns out that the more you cut their taxes, the fewer jobs they bother to create. In terms of job creation, corporations that benefitted the most from tax cuts didn't even keep up with the average growth of employment in the economy as a whole. They are dragging down employment growth rather than improving it.

This study tracks 198 companies on the S&P/TSX composite from 2000 through 2009 and finds those companies—Canada's largest corporations—are making 50% more profit and paying 20% less tax than they did a decade ago.

However, in terms of job creation, they did not keep up with the average growth of employment in the economy as a whole. From 2005 to 2010, the number of employed Canadians rose 6% while the number of jobs created by the companies in the study grew by only 5%.

This holds true everywhere, not just in Canada.

When the government collects less income in taxes from corporations, two things happen.

The year 2014 was the very first year in Canada's history that ordinary citizens fed more money into government tax coffers than all of the wealthy corporations added together.

This continues a trend of shifting the tax burden away from wealthy corporations and ever more heavily onto the backs of citizens like you and me.

As a report from Behind The Numbers concluded:

Instead of investing their enlarged earnings into growth-expanding industrial projects, Canada’s corporate sector — especially its largest firms — have increasingly stockpiled cash on their balance sheet. This “dead money,” as former Bank of Canada governor Mark Carney called it, is one ingredient in the heightened financial stagnation of recent times.

Let's free up that excess cash and put it back to work for Canadians.