Broadway musicals: Are they lightweight fluff designed to enchant us for a couple of hours and leave us whistling a catchy tune or two on our way out of the theatre? Sometimes, but not always. Particularly not since Stephen Sondheim decided to turn the genre on its head almost half a century ago.

Sondheim has been dubbed the father of the modern American musical, a title he earned by tinkering with content and form. Not content to have audiences sit back and relax, he decided to hold a mirror up to our faces and confront us with some of the unpleasant realities of life that we used to attend fluff musicals to avoid.

In 1970, with the first production of "Company" (book by George Furth), Sondheim developed the "concept musical". A musical constructed around a theme with a story but without any chronological plot, per se. It changed our idea of what a musical could be, with its trailblazing story-telling format.

The theme of "Company" is basically that of disaffected, uncertain and anxious people trying to find a way of committing themselves to relationships. The work probes human psychology and ambivalence, exploring personal fears and how we make choices. At its heart lies a tale about the pain and challenges of commitment.

At his 35th birthday party, confirmed bachelor, Robert/Bobby, ponders his single existence. Over the course of a series of dinners, drinks and even a wedding, his friends point out the pros and cons of taking on a spouse. The adamantly single Robert is forced to question his bachelorhood. 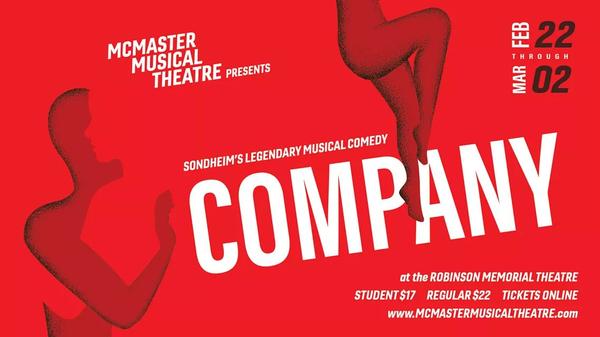 McMaster Musical Theatre's production of "Company" features a talented cast with some very strong ensemble and solo singing. And certainly, they are to be commended for taking on the challenge of a Sondheim musical, particularly this one with its brisk and energetic score and containing many of the maestro's best-known (and most challenging) songs.

The ensemble is filled with energy once things take off in "The Little Things You Do Together," where we're introduced to the five couples that comprise Robert's friends. The blocking, with characters standing in a line, staring at the audience is somewhat static, but it doesn't dampen the ardor of the singers, nor mar their focus.

Standouts in the cast include: Claudia Spadafora as Joanne whose menacing Medusa-like presence can be felt from the moment she appears, Megan Guagliano as April, who possesses all the comedic chops (and more) one could ask for in this role, Antoine Fougere-Ramsamooj who brings a laid-back naturalness and a strong soothing voice as Harry, Paige Hennekam, who is the perfect foil for him with her bubbling manic energy as Sarah, and Jesse Adams, a veritable triple threat with her heartfelt acting, pleasing voice and killer dance moves as Kathy.

"You could drive a person crazy" introduces the three women Robert has been dating casually. The number should have a perky Andrews Sisters buoyancy, but is let down a little by the pacing, although certainly not by the heart and voices of the singers. The danced interludes in this number add little and are, in fact, distracting. This occurs again in "Another Hundred People", and while the dancers are game, they fail to be synchronized.

"Getting Married Today" is a hilarious stream of consciousness tour-de-force for bride-to-be, Amy. Her patter in this amazingly brisk piece would be daunting to any performer. Sarah Lewin brings frenetic energy and terror aplenty. But one can't help wishing she'd been directed to take a breath now and then, and to vary her delivery and try to play this wildly fast patter with some alternating brief moments of reflection and regrouping; in short, to show the character's thought-shifts, rather than just a wildly one-note kind of mania.

If there is any one single element that requires upgrading in this production, it's the orchestral direction. While recognizing that the orchestra was composed of some fine university musicians, and augmented by some gifted local high school players, it must still be pointed out that there was a definite lack of dynamism, rhythm and energy. When it becomes clear that the moments where the vocal ensemble drowns out the orchestra are some of the best moments musically, you know there's a problem.

"Side By Side/What Would We Do Without You" is perhaps the highlight of the evening as suddenly the stage is electrified with energy and movement. The fact that the ensemble is really belting this out is a big plus. It works visually too, with the singers marching into the aisles and connecting with the audience (at last). Everything about this number works and one feels that if director Jayda Conti had held this number up as a standard to match, the entire evening would have been nothing short of breathtaking.

In "Poor Baby", the direction lets the pacing lag a bit. The modern ballet that accompanies this scene is largely forgettable, except for a beautiful performance by Jessie Adams as Kathy. This multi-talented performer clearly has the chops for a dance career anytime she chooses.

"Barcelona" provides another pleasing showcase for the talents of Ms. Guagliano. She brings humour to the song so naturally and effortlessly. Even more impressive than her fine voice is her ability to transform April from a not-too-bright stewardess into a multi-dimensional and very real person.

"The Ladies Who Lunch" is designed to be a show-stopper and Claudia Spadafora as Joanne delivers all the panache, gusto and raw energy to make it just that. With her strong voice and dramatic finesse, she turns in a consummately believable performance in this bravura piece.

It wouldn't be fair to omit the other showstopping number, "Being Alive" from this review. As the central character, Bobby, Nico Belanger possesses a voice of resonance and projection and can manage most of those tricky lyrical and melodic challenges that are native to Sondheim's work. But he does not yet possess the requisite relaxation. Throughout this production, the blocking doesn't help him out at all. Had the direction freed him from a constrained physicality of arms held tightly at his sides, his performance may have soared as adeptly as his voice did.

All in all, MMT's "Company" is well worth seeing. The energy and the passion are all there for the taking!