Council's City Manager Recruitment Committee has violated the Municipal Act and the Procedural By-Law by refusing to allow its public meeting to be attended by the public.

The City of Hamilton held an illegal meeting in Niagara-on-the-Lake this past Saturday, February 9, 2019. I know this not only because of the immensely frustrated and confused discourse on social media and the news since the meeting occurred, but because I, along with fellow citizens Aiden McIlvaney, Lana Miran and Eric Gillis, travelled to the White Oaks Resort and Spa to attend the meeting. 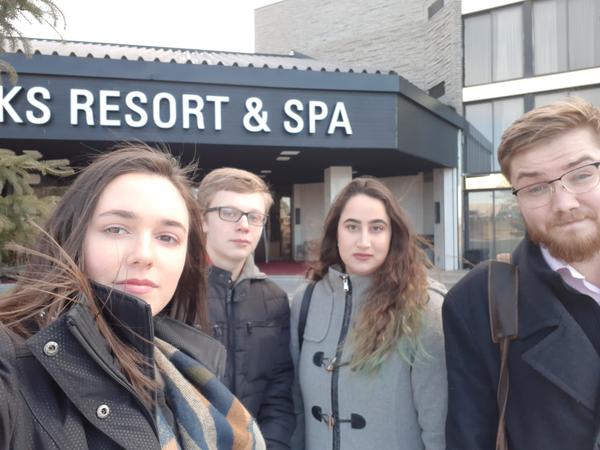 Why do we feel so strongly to describe it in this way? The meeting was held outside the City of Hamilton, not even in an adjacent municipality, violating the Ontario Municipal Act and Council's Procedural By-Law. In addition, the meeting time was changed from 9:00 AM to 8:30 AM, less than 48 hours before the meeting would occur, another rule violation.

But the most surprising part of the whole experience was that when we four respectful, concerned young citizens went to attend the public meeting, we were met by management waiting for us at the door and were forced to leave the premises.

White Oaks Resort and Spa management informed us that they were directed by the City of Hamilton to refuse access to this public meeting for any member of the public, unless they had an email granting them access. We recorded this interaction and have since shared the video to Facebook.

Following this shocking violation of our democratic right to attend a public meeting, we took to social media, and immediately began receiving waves of support from fellow Hamiltonians and members of the community who understand the Municipal Act, our basic rights, and the incredible wrongdoings made by the City of Hamilton and members of Council who called and allowed for this meeting to take place.

Many people were inspired by the facts we shared to contact the Ontario Ombudsman, reporting these violations and calling for action on this Closed Meeting Complaint.

We requested via email to delegate to this committee meeting to share our thoughts and concerns about the General Manager hiring process, but were declined this request via email.

This did not stop us from being heard. Denied to speak to the Committee, we broadcast our delegations over Facebook Live so that members of the public could hear the concerns that this committee refused to listen to. These messages were then sent to the Mayor and Council in written form as formal correspondence to ensure they had every opportunity to hear from us.

Some public discourse has followed to question why we, though aware of the meeting time change, showed up late at around 9:15am. We are transit users, and we took the earliest possible public transit that morning to arrive at said meeting, which we unfortunately knew would make us late.

We also know that, unsurprisingly, no members of Council attempted to arrive using public transit. This meeting was made inaccessible to those of us who wished to attend but needed to use our bussing services to get there.

Regardless, we have a right to attend a public meeting, and on Saturday, this right was violated by the City of Hamilton. It is not uncommon for members of the public and the Mayor and Councillors themselves to come and go as they please during a public meeting. We fully understand and respect formal meeting procedure and in camera procedure, and did not attend to disrupt, sabotage, or "descend on" this meeting.

The call to order at the beginning and adjournment and the end of every council and committee meeting must always be public, and this was all we wished to attend.

Councillor Nrinder Nann had her motion to halt the City Manager hiring process voted down by all present Councillors except Maureen Wilson and John-Paul Danko.

Councillor Wilson is presenting her motion to create a much more equitable, transparent, and accountable committee and hiring process at the upcoming Wednesday City Council meeting. All of us who were denied access to Saturday's public meeting wholeheartedly support both motions presented by the new Councillors.

Last week, Mayor Fred Eisenberger referred to our intentions to speak to this committee as "bizarre." On Sunday, Councillor Sam Merulla shared his email correspondence with media, calling our intentions, actions, and reasoning, "nonsense."

I am deeply disappointed in this violation of the democratic right for myself, fellow advocates, and journalists to attend a public meeting. We sincerely hope that nothing like this ever happens again under the leadership of the City of Hamilton and direction of Council.