As well as trying to change behaviours, we should also arrange our physical environment so the danger of collisions is reduced without sacrificing the pedestrian character of city streets.

On Thursday, August 24, 2006, 13-year-old Stephan Clarke was riding his bike down the sidewalk of Glow Avenue. He swerved onto the street to avoid a woman pushing a stroller toward him, jumping off the curb the way children always do. (Who am I kidding? I do it, too.)

Instead of cruising on asphalt, Stephan plowed into a pickup truck and died from the resulting head injury.

People are already discussing the fact that he wasn't wearing a helmet. Maybe that would have saved his life; maybe it would have rendered him comatose or vegetative. It certainly wouldn't have made things worse.

People are also discussing the fact that he was riding on the sidewalk and cut suddenly onto to the road. The first rule of safe cycling is to be visible and predictable so motorists can guess what you're going to do.

A common theme in these responses is that they approach this tragedy as a behaviour problem and focus on what the cyclist should have done.

The trouble is that it's difficult to change people's behaviour. We can make rules and run education campaigns, but change comes slowly, if at all. It's just too much fun to jump the curb; few children can resist the urge. 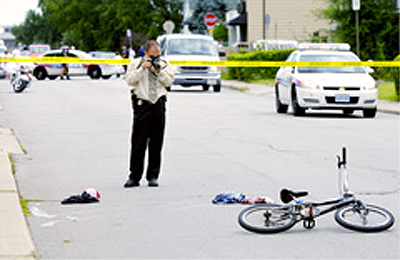 Let's regard it as an engineering problem rather than a behaviour problem. When engineers design systems, they try to make them foolproof, meaning safety is inherent to the system's design and does not depend on conforming behaviour.

Obviously, the goal of a completely foolproof street is elusive, but some simple changes would make the fateful street that took Stephan Clarke's life much safer. 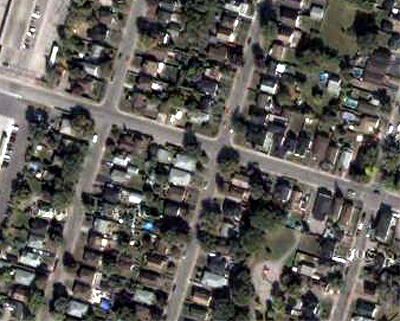 Our streets are already engineered. Traffic lights, turn lanes, one way streets, and so on, are all engineering attempts to maximize the flow of automotive traffic. Today, some consideration is given to non-vehicle safety, but it usually comes at the expense of freedom of movement, by restricting the times and places that pedestrians can move around so they don't get in the way of motor vehicles.

This is based on the false premise that streets exist mainly for automobiles, a premise that kills far too many pedestrians and cyclists each year. It's time we start engineering safety and mobility for all modes of traffic.

Helmets can and do save lifes. wearahelmet.org

I am so sad for this family.

Statistically, helmets save lives, so if everyone wears a helmet, less people overall will die in bike accidents. But you're not always able to say a helmet would have saved someones life in a particular case.

I Feel Sorry for stephan! I only met him once and i didnt talk to him then cuz we didnt no eachother! I hope stephans mother father and his little brother will be ok. R.I.P Stephan Clark,,, These ppl will never forget you...Raymond,Willie,Baron,Brittany,Jennifer,
Jessica,Adam,Brandon,Milena,Niko,Zoran! Always Remember You!!

r.i.p stephan clarke i miss u so much like you dont even no i cry every night thinkin of you. you were a good friend everyone liked you. you were never mean to some one i dont no why this would happen too u i miss you so much. i see your mom and step dad and lil brother all the time and i always start to cry.everyone misses you so much and i even people that dont even no you still cry because they dont no how someone so specil like you can no longer not be there you were so nice and kind to every one i dont think theres one person out there that says differnt you were the nicest person i ever mete r.i.p stephan clarke one day i will see you again xoxo

I was Stephan Friend and girlfriend in gr.1 and 2. The list thing we said befor I moved was that we well grt marred but I just not

I loved he alot and so did my sis

I wish i didn't happin. But so long a go it happiend. I wish it never did i barely new you. but i knew enough to say u were a good person the night be for u passed i had a dream. That u got hit by a car and suvried but in reality u didn't but the next day. it happiened so quick and so fast. (3 years's later) i was walking down the street one day and i saw a kid walking by he looked like a spitting image of you. i stoped and cried i only knew you for a year but i was glad u were in my class i rember u always talked to everyone and at lunch u always had air heads i can never forget you and i never will ! . R.I.P buddy !!