Running in Hamilton: About the Money

If you're elected, you'll be responsible for co-managing billions of public dollars. Use your campaign as an opportunity to build a solid understanding and learn what it means to work with a budget.

This article is Part 2 in a series of reflections on Cameron Kroetsch's Ward 2 election campaign. You can also read Part 1 and Part 3.

This fairly deep dive into our campaign finances is about more than just being transparent and accountable. This article in the series, more than any other, is about helping future candidates to start off from the place our campaign ended. It's also about demonstrating that a grassroots campaign really can raise money and that smaller donations do have a tremendous impact.

As a caveat, I should say that I won't be able to provide as much detail as I'd like, as we're still putting proverbial beans into columns over here, but I hope this article gives you a clearer picture of our campaign finances.

The financial side of campaigning is probably one of the most mysterious parts for the general public to unpack. I've had a lot of people ask me what we spend all of this money on, and so I think, in part, I just want Hamiltonians to be able to see this easily. Financial reporting is usually opaquely couched in a manual document. There's no searchable database and no simple way to aggregate information or think about it outside of the prescribed format without a lot of additional work.

What our data shows is that even when it came to donations, ours was a very grassroots campaign. When I say "grassroots" in the context of the financial side of this campaign, I mean that it didn't rely mainly on donations from "interested third parties" - people who could be perceived to benefit by donating to your campaign because they have a vested interest in the outcome of a decision you might make if you're elected.

Our donations mainly came from people I have gotten to know through my community work, those we connected with through the campaign, and my friends and family.

How Much We Raised and When

The numbers here are not final and are rounded in places. This information is being provided to give an overview, not to act as an audit itself. Here's a graph of when we raised the money for our campaign, by month, starting on May 1. 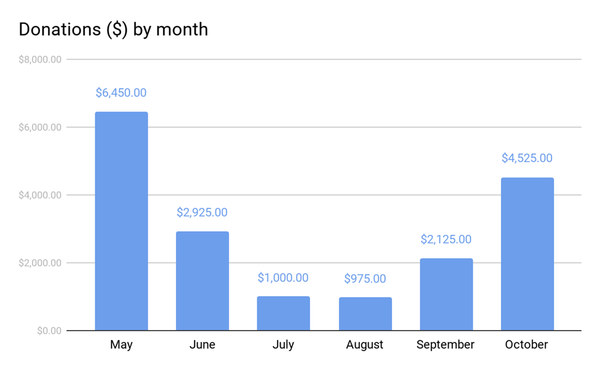 What's obvious from the graph is that people donated mostly toward the beginning and the end of the campaign (61 percent of donations). Our launch was in June, which accounted for some additional donations that month, but beyond that spike, the summer was a lull.

That was probably the biggest issue we faced in terms of budgeting for this campaign: we just weren't sure if the money would come or not. We had little room for error and had to stick to the budget and plan we came up with - all of which needed to be set in stone before September.

As is likely no surprise, there's a lot of lead time needed for ordering signs, printing and designing campaign literature, and preparing for events.

Where the Money Came From

Here are three maps to give you a visual sense of where all of our campaign donations came from. 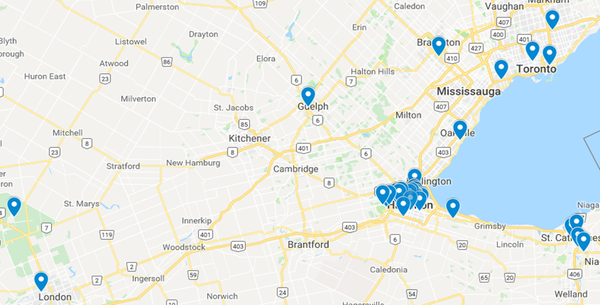 Map A: All donations 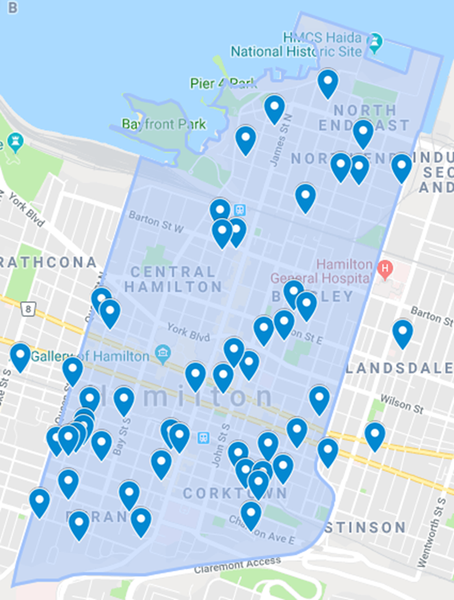 As you can tell from the maps above, most of our donations came from Ward 2 and nearly 80 percent of all donations and donors were were from Hamilton.

As someone who was running for the first time and without huge name recognition, many of the donations I received outside of the city came from my friends and family (not a huge surprise, I'm sure). For those who don't know, I've lived in Guelph and London before, grew up in the GTA, and was born and partly raised in St. Catharines.

What We Spent the Money On and Why

The best way to answer the question of what we spent our money on is with a pie chart. The pie chart details percentages and amounts based on how much we raised. 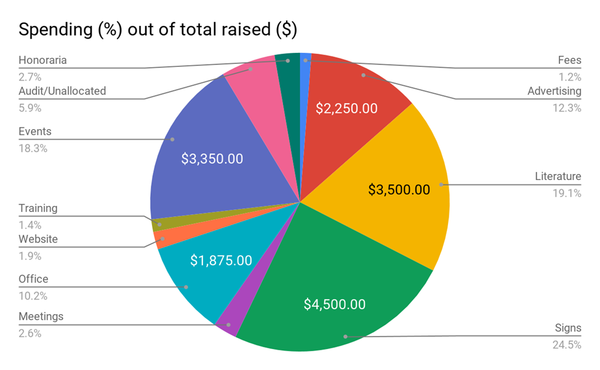 You might be surprised by some of these numbers. I was at first.

We could have done some things a little more cheaply, for sure. We insisted on working with local companies, especially in Ward 2, as much as possible. We also chose companies, when it was possible, with unionized employees (as we did with our signs, for instance). This definitely drove costs up in some instances.

To unpack a few things:

Something that needs to be said: I'm not rich and I couldn't afford to bankroll this campaign. I had to take time away from my full-time job and had to turn all of my focus on running in this election. This meant neglecting many important things, some of them financial.

A great example of this relates to changing my eating patterns to adjust to a new schedule. I usually eat all of my meals at home, going out occasionally. I can safely say that I never ate out as much as I did during the campaign period.

There are also all kinds of lines that have to be drawn, ethically and otherwise, when it comes to campaign expenses. It was a function of the fact that my life had changed, and that I was having to make different choices to make everything else work and to remain, frankly, put together enough to get through it all. The contingent expenses of campaigning are everywhere and nowhere and expensive.

The truth is that you can't budget with what you don't have in a municipal election. If you can, keep track of the money as it comes in and do your best to dedicate one person to this task.

We did that pretty well, which is why it wasn't very painful for me to be able to produce the information for this article and why we'll likely save money during the audit process. Being transparent and accountable almost always means being organized. Don't overlook the power of a spreadsheet, a notepad, and the time needed to check in on things periodically.

If you think you can leave it all to the end, or pay someone else to figure it all out, you'll likely find that neither is possible. Financial literacy is not only the responsibility of your campaign team, but also yours. After all, if you're elected, you'll be responsible for co-managing billions of public dollars. Use this opportunity to build a solid understanding and learn what it means to work with a budget.