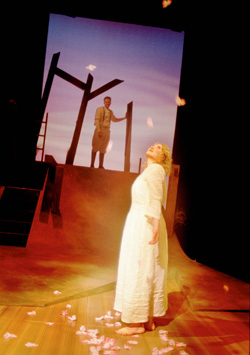 Stephanie Hope Lawlor, Vicktoria Adams, Luke Brown and I met, recently, to talk about their upcoming production of the play Mary's Wedding and other things.

Stephanie, along with Michael Rode, are starring in the two-hander and Luke is directing it. The gathering provided a multitude of pleasures: good company, beer at The West Town, supporting art, supporting friends, learning, experiencing, and writing about it for Raise the Hammer.

Mary's Wedding, written by Stephen Massicotte, is a Canadian success. Luke said, "It came out in 2002 and was a really big hit. It's been performed well over a hundred times, across Canada and the world, but never in Hamilton."

Many amatuer, aspiring playwrights will be inspired to note Massicotte has had no formal instruction and began his career writing Fringe plays for himself and his friends. When asked why they chose Mary's Wedding, Stephanie said, "The story takes place during World War 1 and it's been 100 years, since the end of the war, so the timing is poignant. It's a beautiful and poetic piece. I love it more each time I read it."

Vicktoria said, "It's a beautiful love story. Every time I read it, I cry."

Luke agreed, saying, "It's staggeringly beautiful." He added, "This show can only take place in a theatrical setting. It's nonlinear. The play is a dream. It takes place from 1914 to 1920 and all points in between. You know what's going to happen in the first 30 seconds.

"The play opens with Charlie, Mary's finance, introducing himself to the audience: 'Hello, out there. Thank you for coming. Before we begin, there is something I have to tell you. Tonight is just a dream. I ask you to remember that. It begins at the end and ends at the beginning. There are sad parts. Don't let that stop you from dreaming it too.'"

Two nights later, I attended a rehearsal and saw a small part of the play being worked. It is, indeed, nonlinear and I don't know if I saw a scene from the beginning, middle, or end of Mary's Wedding. It didn't matter. It was riveting.

The dialogue is a combination of dream sequences, real and imaginary conversations, solo mutterings and maniacal raving, all woven into a taught, lyrical tightrope that actors must dance upon. Incredibly tender, romantic moments are blown to pieces by scenes and screams of young, Canadian men being blown to pieces in European trenches.

Massicotte has uncommon skill. It takes courage to write such a script and bravery to put it on. Arduous though it may be, writing the story is the first step in a journey to the other worlds theatre represents.

At the rehearsal, I was reminded of the investment a production requires: learning lines, gestures, actions, timing, effects, and collaborating effectively with a team of creative idea-machines, to make each moment perfect.

Intimacy, minimalism, and detail were paramount at the Mary's Wedding run-through. "We need less... When in doubt, go as simple as possible... Low rank salutes first," were some of the directions. There was an intensity to the rehearsal, I liked; a determination to do the script justice.

During a break, Michael, working through gestures, spoke of finding the essence, the core, of each line and action. Vigorous writing requires the aggressive removal of unnecessary words. Likewise, actors must contain, maintain, and restrain themselves, while being fully committed to a character they've created, with the writer and director; a balancing act, certainly.

After the break, like a turning on a switch, Michael was Charlie, again, and Stephanie was Mary.

The show is being put on at the Hamilton Association for Residential and Recreational Redevelopment Programs (HARRRP), a wonderful charity. Although not a traditional venue, the former Anglican church is perfect for the atmospheric, theatre experience being created.

"It's gorgeous," Stephanie said, of the high ceilinged building, of faith and charity. There are few props for the altar/stage, which will be lit by candles. The people at HARRRP have been "incredibly supportive" in embracing their first theatrical run. I wish them well.

Michael Rode plays Charlie. He is a Hamilton based actor, director, father, and Montessori educator. Every year he puts on a Shakespeare play with his students. This year it's Macbeth.

Stephanie Hope Lawlor is Mary. Excited by the theatre scene in her hometown, Stephanie moved back to Hamilton in 2014. "I was stricken by how much Indie theatre is going on. It's exciting. Hamilton is special."

She is the Head of the Theatre Department at the Hamilton Conservatory for the Arts, teaching acting classes and musical theatre for all ages. "I've also been able to create new curriculum, grow the program into what is now twice the size since I started there, and develop our student base which now includes many kids who grow up through the program. It's been very special to be part of the development of the program there, and it continues to change and grow."

Luke is the founder of Flat Earth Global and the director of New Play Development for Theatre Aquarius. He said, "We expect the audience to bring their imagination and come with us on a journey."

It opens tonight. Tickets and information.