Cyclist Seriously Injured on Street With No Cycling Facilities

Last Wednesday around 3:00 PM, a woman riding a bicycle suffered a serious injury after colliding with a block wall and wrought-iron fence on the northwest corner of John Street South and Charlton Avenue West. 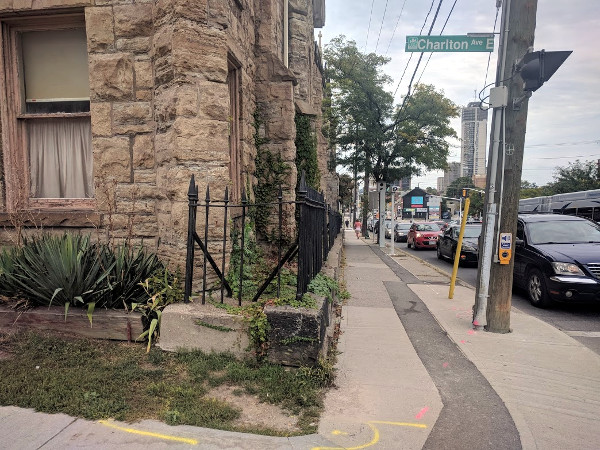 The woman was riding her bike northbound on the west (left) sidewalk of John Street and rode across Charlton on a green light from the southwest corner to the northwest corner.

Suddenly she noticed a pedestrian standing on the northwest corner and swerved to avoid a collision. Instead, she crashed into the low wall in front of the Church of the Ascension. She was rushed to hospital with "life-threatening" injuries.

The media release from Hamilton Police made a point of noting that the cyclist was riding on the sidewalk and that she was not wearing a helmet.

It is important to note that biking on the sidewalk may feel safer than riding on the street, but it is actually the most dangerous place to ride. In addition to pedestrians, cyclist riding on sidewalks have to contend with motorists pulling into and out of parking lots who are not expecting a fast-moving vehicle on the sidewalk.

But the police news release did not point out that John Street South is a fast, four-lane arterial street with no dedicated cycling facilities of any kind. 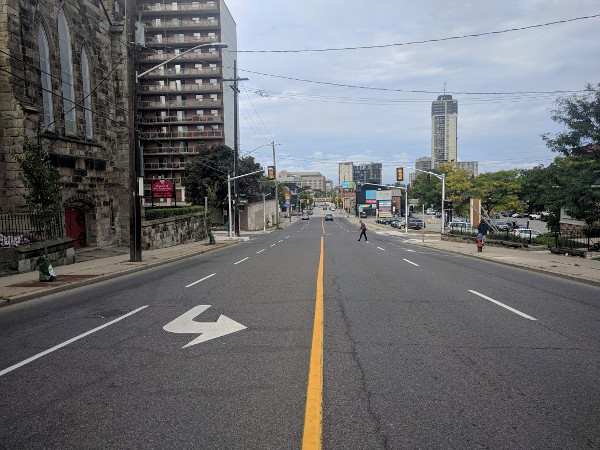 The cardinal rule of hazard management is that telling people to be more careful should only be considered a last resort if it is impossible to design the system to be safer to use.

It's easy to blame the cyclist for riding on the sidewalk, but an arterial street that has no dedicated space for cycling is a street that is unsafe by design.

At a certain point, our ongoing failure to reconfigure our street network to be inclusive for all road users starts to look like civic negligence.

Some other facts and corrections -

-The woman was riding at a 'high rate' of speed northbound on John Street.

-'She rode across JOHN STREET(It was JOHN St - NOT Charlton Ave) on a green light from the southwest corner to the northwest corner.' (north bound). She was riding against the flow of traffic.

-She wasn't wearing a helmet.

So, we have a cyclist riding at a high rate of speed, in the opposite direction of traffic and not wearing a helmet.

Yes, it appears likely a cycling facility would've made all the difference in this case.

You seem to have misinterpreted the Spec report:

The woman was riding at a high rate of speed northbound on John Street, on the west sidewalk around 3 p.m. Wednesday, when she crossed from the southwest to the northwest corner at Charlton Avenue, Hamilton police said.

She crossed on the crosswalk and with a green light.

This clearly states that she was travelling northbound on the west sidewalk of John Street and crossed Charlton (not John) on a green light. She was not "riding against the flow of traffic" as she was on the sidewalk (like a pedestrian). Note that pedestrians are often advised to walk facing traffic, and this cyclist was clearly (and misguidedly) attempting to use the sidewalk like a pedestrian.

Cyclists (especially those lacking in confidence) sometimes ride on the sidewalk because they are too scared to ride on the road (even though the sidewalk is actually a very unsafe place to ride).

And yes, safe cycling facilities could indeed have made all the difference since she would most likely have ridden on a protected cycle lane rather than on the sidewalk if such facilities had been available ... and would not then have come into conflict with the pedestrian.

The appropriate reaction is not try to blame the victim, but to find ways to re-design the street so this sort of accident is less likely to happen in the future.

Vancouver reacted in just this way when a cyclist fell off the sidewalk and was crushed by a bus in the Stanley Park causeway trying to avoid a group of pedestrians (note that cyclists must ride on the sidewalk in that location).

Instead of blaming the cyclist for not dismounting when she approached pedestrians (as was the rule) the city widened the path so there is room for both cyclists and pedestrians and added a physical barrier so cyclists (and pedestrians) cannot fall onto the road.

It is time for the victims of traffic violence to receive the same lack of victim-blaming about what they are wearing.

Before implementation, 46 percent of weekday cyclists on PPW used the sidewalk. Now only four percent do, and about a third of them are kids 12 and under who are allowed to do it.

In this case the "victim of traffic violence" was the pedestrian standing on the corner waiting to cross John street.

Sorry, but equating a piece of protective gear like a helmet is nowhere near the same as the type of fashion gear worn by a sexual assault victim.

Perhaps its my age and the knowledge of our country and city's historic past, I do not understand why a cyclist would think its alright to ride on a sidewalk. All mechanical forms of transportation traveled on the roadway in the past. In the introduction periods we had all sorts of traffic from horse, auto to bike, none road the sidewalk as a rule, perhaps a child learning to ride on a side street. So many divisive groups in our society without cause or practical reason. To demand that streets should accommodate cyclist, without that cyclist paying road tax on purchase, on fuel, insurance, or being a developer, business owner that actually foot the bill is pretty selfish. To be inconsiderate of the disabled using sidewalks, pedestrians that sidewalks are built for and are disturbed by cyclist. Now blame the City for not planning for a group that contributes how much? Why not be happy and supportive of the bike lanes given, and where there are none, or it is not safe to ride, be like a person taking transit, and walk. the few blocks to your destination. If it is too far City buses accommodate bikes, pay the fair, contribute to our transit system.

As someone from Burlington where riding on the sidewalk is legal. I can completely understand why someone would. My girlfriend is extremely afraid of cycling near cars, as is my friend's girlfriend. They were extremely against cycling to an event out east, but I forced it on them. We took the Cannon Street bike lane, and they had fun. I repeat, they had FUN cycling on the road. If I can understand this in my young age, then you should understand it at whatever age you may be, though I suspect older than 23.

We'll get to a place where Hamilton is better, it's just about how quickly we do it, and how we'll handle the growing pains.

Municipal roads are paid primarily from municipal property tax. Tax on fuel goes to the province to maintain highways, which bicycles are not allowed on. Insurance does not pay for our roads. Cars damage our roads much faster than bicycles.

You can’t engineer things for every prospective lapse in judgement. I’m all for increased bike infrastructure, but using this case to call for it is absurd.

You can’t engineer things for every prospective lapse in judgement.

When it comes to protecting people from fast-moving machinery, the Ontario Ministry of Labour demands that every factory in Hamilton do just that. And, indeed, every single factory in Hamilton does engineer things for industrial safety to design out harm due to every prospective lapse in judgement. Ditto for railway safety. Ditto for airline safety.

But somehow, as soon as the worker walks out the factory door, the government fails to ensure that he is protected to the same standard of safety on our streets. Let's change that!