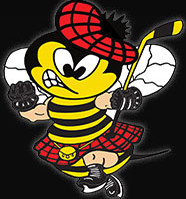 Junior Hockey has returned to the Dave Andreychuk Mountain Arena, and Hamilton is winning games.

On September 24, 2018, the Hamilton Kilty B's beat the St. Catharines Falcons. It was a roller-coaster of a match.

Luke Croucher scored an unassisted goal for Hamilton within the first minute of the game. But then St. Catharines tied it up about five minutes later.

Later in the first period, the Kilty B's retook the lead. TJ Hughes, assisted by Cullen Ferguson, took a short breakaway past the Falcons' defence and then fired a backhand past the Falcons' keeper. 2-1 for Hamilton.

However, the lead did not last long. With 3:08 left in the first period, the Falcons tied it up, when Carson Edwardson scored a goal on Hamilton.

Then late in the second period the Kilty B's went ahead again. Assisted by TJ Hughes and Alex Jerome, Anthony Pinelli capitalized on the power play to make it 3-2 Hamilton.

The Hamilton Kilty B's on the attack against the St. Catharines Falcons

The score remained the same until the last minute of play. The Falcons pulled their goalie to try to get an advantage but Hamilton's keeper Marco Costantini made three massive saves for the home team.

Finally, a long shot from Mason Reeves put the puck in the open net to secure a 4-2 victory for Hamilton.

The Hamilton Kilty B's play home games nearly every Monday night this season to the end of February 2019. Games start at 7:00 pm.