Light Rail can carry up to four times as many commuters per lane as automobiles.

Project skeptics and opponents claim this will increase traffic congestion due to the lost vehicle lanes, but that analysis ignores the amount of traffic - i.e. people moving around - that the LRT system itself will carry.

With two lanes, that means 1,800 cars and a total of 2,340 commuters an hour who currently drive and will be displaced from their normal commuting route to make room for LRT.

But LRT doesn't just take up space and leave it empty. It takes up space and carries commuters. Let's find out how many.

The total capacity of an LRT lane per hour depends on the capacity of the LRT vehicle and the number of trips per hour.

But that's just the baseline service level. If we reduce headways to five minutes, that means 12 LRT trips per lane per hour. The total capacity per hour increases to 4,800 (200 passengers times twelve trips times two lanes).

And LRT vehicles can also be coupled together, making a train that can carry 400 passengers. Coupled LRT running at six-minute headways can carry 8,000 passengers per hour (400 people times ten trips times two lanes).

With LRT, we have more than quadrupled the number of people who can travel along these two lanes in an hour.

Here are the totals represented in a bar chart: 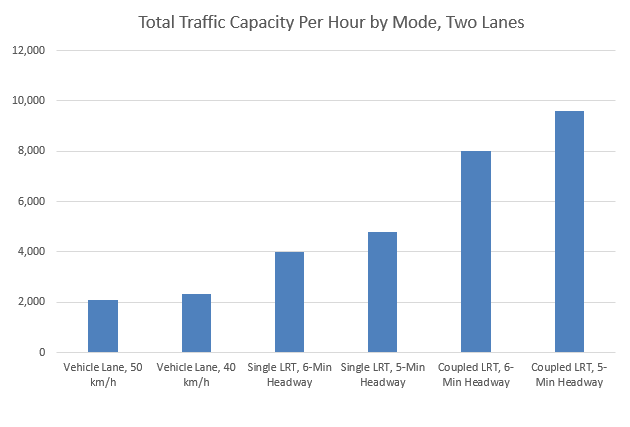 This may seem difficult to believe. How can a lane that sits empty most of the time carry more people than a lane that is steadily filled with cars?

The answer is that cars take up an enormous amount of space on our scarce public rights of way. Even if you ignore the energy consumption, air pollution and risk of collisions, cars are the most space-inefficient way for large numbers of people to get around on busy city streets.

By now you may have seen some variant of the classic side-by-side overhead photos of a city street with the same group of people in cars, on bikes and on a bus, which shows in shocking detail just how much space cars need.

A few years ago, the Washington Post did their version of the comparison using 200 people in 177 cars, on 200 bikes, on three buses, and on one LRT vehicle:

One of the most interesting slides in this animation may be the second one, which depicts the space used by 200 people in cars - but without the cars. As you can see, people in cars take up an enormous amount of space. 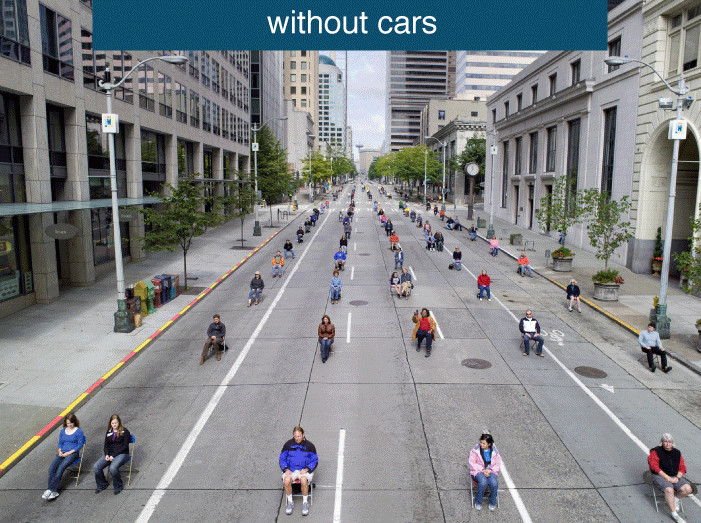 Second slide: space used by 200 people in cars without the cars

Some LRT opponents claim we are trying to "create" traffic congestion in order to justify LRT. That is a backwards-looking analysis. Congestion is coming whether or not we decide to prepare for it.

Main Street and King Street already took over the front lawns of the properties lining them decades ago. There is no more room to widen them further without demolishing many thousands of buildings and destroying the corridor.

The only way we can accommodate our expected population growth is to shape that growth with investment in rapid transit that can accommodate large numbers of commuters efficiently, enhanced by new transit-oriented developments along our rapid transit corridors that provide a wider variety of housing options and transportation modes.

The historical assumption that most people will live in single-family houses an drive everywhere does a disservice to people who want more choice in where to live and how to get around. And our historic failure to grow the supply of urban living arrangements has resulted in sustained demand pushing up housing prices across Hamilton and especially across the lower city.

Many Hamiltonians say they don't want Hamilton to turn into Toronto, and I agree - but we need to make sure we learn the right lessons. Toronto has dramatically increased its urban population over the past two decades without investing in expanding its higher-order transit system to serve that population.

The result of Toronto's transit under-funding is that too many people are forced to use their cars, resulting in gridlock. 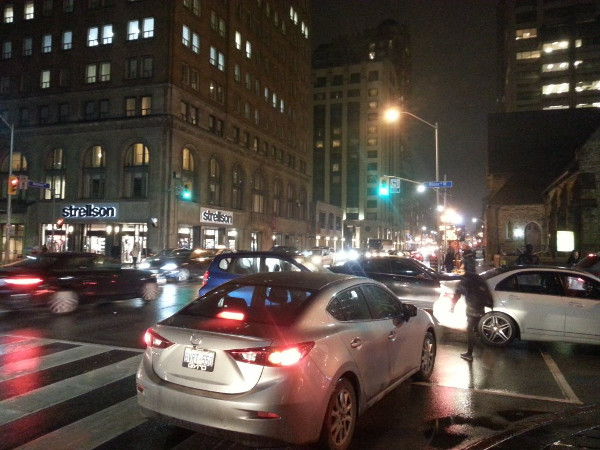 We have an extraordinary opportunity in Hamilton to stay ahead of the crunch and build rapid transit now, when the disruption from its construction is still manageable and traffic congestion has not yet reached a crisis.

This is what smart, sensible long-term strategic planning looks like. After a decade of planning, we have an approved, fully-funded LRT system ready to start construction next year. All we have to do is not screw it up.

We turned down an almost-fully-funded modern LRT system back in 1981 and that system ended up going to Vancouver, where it has been enormously successful. I can't think of a more reckless, self-destructive move than for Hamilton to make the same mistake again and throw away this once-in-a-lifetime opportunity to accomplish our growth strategy and position ourselves for success.

An additional point supporting your argument; the anti-LRT lobby claims autonomous vehicles will make LRT redundant. Turns out, ride sharing is increasing congestion due to people taking ride shares that otherwise would take transit. Same argument applies to autonomous vehicles, which will do nothing to solve congestion for exactly the reasons set our here.

Hamilton's LRT project is being overseen by the provincial agency Metrolinx. Who says that LRT can have headways as low as 90 seconds. See page 10 of the Metrolinx backgrounder.

So actually, LRT can carry up to 10 times as many people per lane as automobiles. In effect, for the short and medium term, LRT completely eliminates congestion of people moving along its route. If the LRT vehicles become crowded, the vehicle headways can be reduced to eliminate the overcrowding.

It's always cheaper to make the trains longer than increasing their frequencies. Increasing the tempo of operations in rail systems by increasing operating frequencies stresses the maintenance schedule, adds greater load to the signaling and power systems, increases track and point wear by increasing the number of times the track flexes and flange damage. Keeping in mind that every transportation system does have it's limits however you use it.

Good design can limit the extra costs associated with longer trains by building in greater capacity and resilancy at the time of design and construction. When I worked with the CPR in the Toronto Yards they used to say, " more trains, more cost, longer trains, more work!" They would rather work their equipment and people harder than have to add the greater number of people and equipment needed for more trains.

True, but the problem is that frequent service is an important part of good passenger service. Who wants to wait? That's why the TTC's marketing slogan for their streetcar service used to be Always a Car in Sight.

Great numbers, except for one problem. Do you seriously think this train will run to capacity all the time. No chance. It will more than likely be half full most of the time and mostly empty the rest. Oh yes, there will be some full ones during rush hour etc...............but don't fool yourself. I agree in supporting transit, but not this over priced train that services one line in the middle of the city. It lacks flexibility and is already out dated.

I live near King and York...both streets are mostly empty 22 hours a day.

Do you realize that the capacity of the private cars currently using this route is less than half full ALL of the time? Not to mention all the dead and injured. That's the obsolete, outdated transportation model that needs to be progressively phased out as soon as possible to reduce that death toll of dead and injured.