As part of our Hamilton municipal election coverage, Raise the Hammer has published digital scans of every municipal candidate nomination form for election purposes.

IMPORTANT UPDATE: - Raise the Hammer has decided to take down the candidate nomination forms. While the candidate forms are public documents, it is always necessary to find the appropriate balance between access to information with protection of privacy - not just legally, but also in practical terms.

While the Municipal Elections Act is clear that the Municipal Freedom of Information and Protection of Privacy Act does not apply to candidate nomination forms, making personal contact information available electronically nevertheless creates a potential for targeted harassment and abuse.

I wish to thank the people who reached out directly to me to point out specific concerns, and to apologize for not giving it sufficient consideration before deciding to publish the documents. I am sorry, and we will try to do better next time.

These forms are public documents and are available to anyone who goes to the Clerk's desk at City Hall and requests to see them. The City will also make photocopies on request (at the cost of 40 cents a page), but refuses to allow people to "take photo replications" of the records.

Citizen advocate Karl Andrus decided to pay the $373.17 total cost to have the City photocopy all of the nomination documents. He then took the time to scan and digitize every page and made them available to Raise the Hammer to publish.

These are all public records as explicitly stated in the Municipal Elections Act. As noted, they are publicly accessible at City Hall. Anyone can request to see any form and pay to have a photocopy made.

(5) Despite anything in the Municipal Freedom of Information and Protection of Privacy Act, documents and materials filed with or prepared by the clerk or any other election official under this Act are public records and, until their destruction, may be inspected by any person at the clerk's office at a time when the office is open.

(7) A person inspecting documents under this section is entitled to make extracts from them and, on payment of the fee established by the clerk, to make copies of them.

The City has interpreted this subsection of the Act to conclude that it "does not permit persons viewing Election Records to take photo replications of the records" and has a notice posted by the Clerks' desk to this effect. 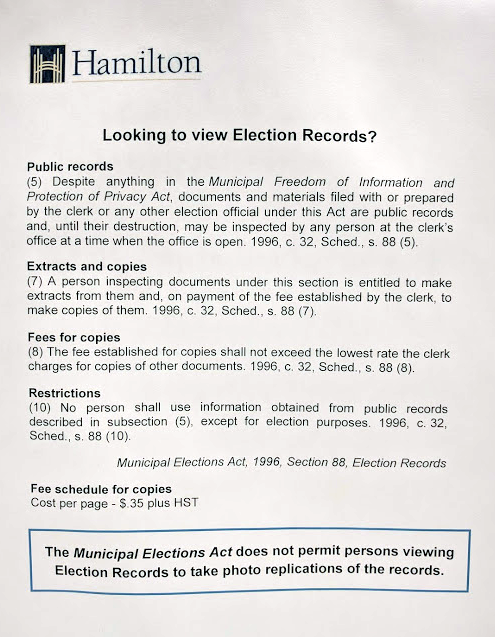 It is also important to note here that Subsection 88(10) of the Act states:

No person shall use information obtained from public records described in subsection (5), except for election purposes.

Please keep Subsection 88(10) in mind before using any information in these records. Violation of this provision is a provincial offence under Section 94 of the Act.

Raise the Hammer has also created a database of municipal election candidates including their preferred contact information where available, using the City's Nominated Candidates for Mayor and Ward Councillor page.

We have sent a set of policy questions to each candidate and are publishing their responses as we receive them. In addition, all candidates are invited to submit opinion articles to RTH for publication. We will publish any submission that does not violate our submission guidelines.

Raise the Hammer has a longstanding policy of not endorsing particular candidates and that policy continues this election.

Too bad that it was taken down. Was glad to at least take a look at some of the data before it was taken down. One of the most telling things that I saw was that mayoral candidate Edward Graydon, the self-styled "Mr. Anti-LRT", had nominations from the Lazitch family - yes, the same ones that own Gilbert's big and tall, and run most of the anti-LRT interference.

I appreciate you posting it but respect your decision to take it down. It's really too bad the city hides this data from its citizens - if members of the public are endorsing people or you make the leap to run, I don't see why you would want to hide those that helped put you on the ballot.