In a misguided attempt to score a rhetorical point yesterday, Whitehead appears to have illegally taken and posted two photos of backed-up traffic on Queen Street South in violation of Ontario's Distracted Driving law.

Using his handheld device, Whitehead took two photos from behind the wheel of his car and posted them to Twitter.

The first photo shows backed-up traffic on Queen Street South, slightly north of Robinson Street. He posted the photo at 5:19 PM with the accompanying text: "Can this be Ryan's objective This is how Ryan sees our future [sic]". 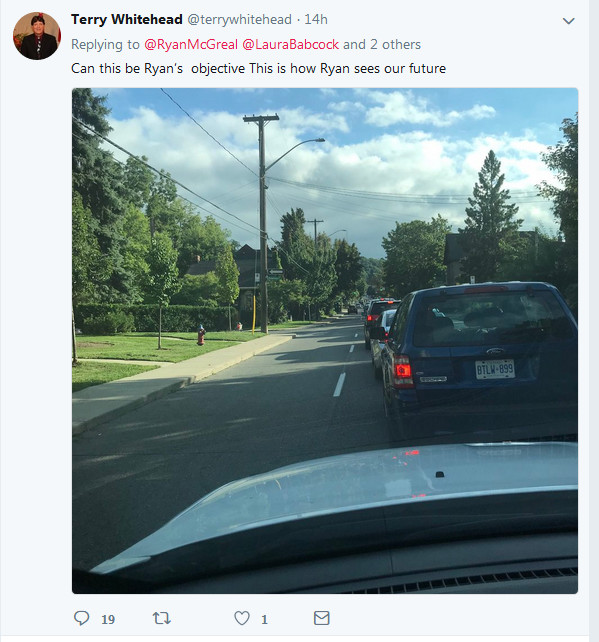 The second photo also shows backed-up traffic on Queen Street South, but from a vantage closer to Charlton Avenue West. He posted this photo at 5:22 PM with the accompanying text, "Nice normal day at this time". 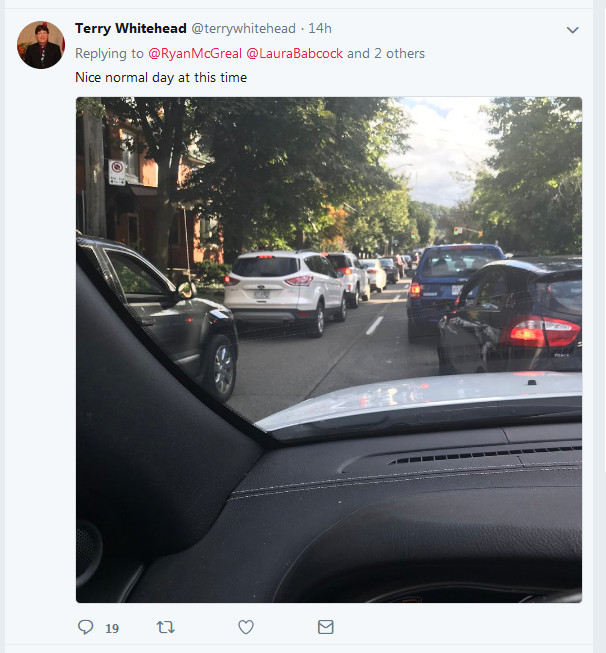 In both cases, the photo is taken from behind the steering wheel while the car is sitting in a lane of live traffic. This is an illegal violation of Ontario's Distracted Driving law.

Several people pointed this out in tweet replies, but Whitehead doubled down by claiming his car was in park. At 5:31 PM, possibly while still driving, he tweeted the reply, "In park mode".

Later yesterday evening at 9:18 PM, Whitehead tweeted another reply claiming that his action was not illegal, writing: "When I am in park literally what world do you live in to suggest any law was broken . Is this the quality of discussion that is remotely responsible [sic]". 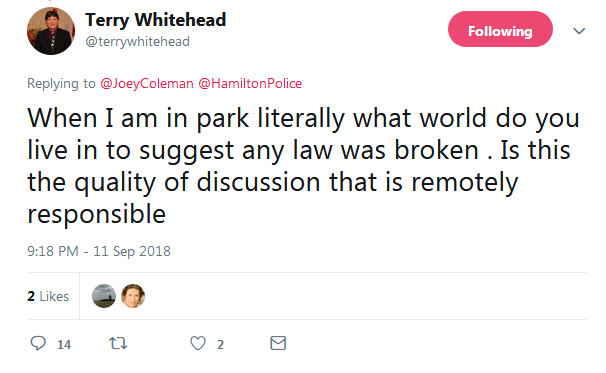 According to the Province of Ontario's Distracted Driving webpage:

Using your phone to talk, text, check maps or choose a playlist while you're behind the wheel all count as distracted driving - and they put you and others at risk.

Other activities like eating, reading or typing a destination into a GPS are also dangerous when you're behind the wheel.

It doesn't matter if you're on a highway or stopped at a red light - distracted driving could cost you.

The easiest way to avoid penalties for distracted driving is to not use a hand-held device when you're behind the wheel.

It's against the law to use hand-held communication (e.g. your phone) and electronic entertainment devices (e.g. DVD player, e-reader) while driving.

In fact, simply holding a phone or other device while driving is against the law.

The Ontario Ministry of Transportation provides more detail in a FAQ:

When driving, you are not permitted to use hand-held communication and entertainment devices or view display screens unrelated to the driving task, with the following exceptions:

If you're parked or safely pulled over and not impeding traffic, then you're not driving. You can use the device from behind the wheel without getting charged.

There is a hitch. You have to follow other traffic laws. If it says No Parking, you can't park there. You have to be lawfully, or legally, parked. That means you can only park where parking is allowed. If there's a No Parking sign, then it's not lawful parking.

In other words, putting a car in "park mode" while sitting in a live traffic lane and then using a cellphone is still illegal, because the car is not "lawfully parked" or "safely pulled off the roadway".

It seems to me that, as both a long-standing member of the Hamilton Police Services Board and a relentless apologist for driving, Whitehead really ought to understand that what he did was illegal.

Facepalms All the Way Down

Whitehead posted the photos in the context of a longer debate over whether Hamilton needs to redesign its dangerous, high-speed arterial streets to be safer and more inclusive. Whitehead routinely takes a rhetorical position against any change to the street that impacts commuting times for cut-through drivers.

The debate started two weeks ago when a woman living in Whitehead's ward asked him to accompany her son on his biking route to school to understand the challenges. Whitehead replied:

I have ridden for years and still ride I was taught to be aware of my surrounding and anticipate risk as I drive. Is this skill set still being taught. I know in a work place there is a lot of emphasis on this to prevent people from getting hurt. cannot bubble wrap everyone. [sic]

Whitehead steadily dug in deeper and deeper during the debate that followed, culminating in yesterday's distracted driving.

And finally, we come to the traffic backup itself. Whitehead described it in his tweet as a "nice normal day at this time", but in fact traffic was backed up because a school bus was stalled on the Beckett Drive escarpment access, as confirmed by multiple witnesses.

Since Whitehead drives this route regularly, he must know that the traffic was unusual. But why let the truth - or, for that matter, the law - get in the way of a good social media zing?

The irony in all this is that this displays Whitehead's assumption that he and his constituents should have an eternal right to cut through residential streets to get to the west mountain in 5 minutes from the 403. Aberdeen should be a semi-arterial for people accessing the Durand and Kirkendall. The Queen Street Hill is an option for the west mountain, but there should be no expectation this will be a quick trip. So yes, Terry, this isn't the future we want but it's the future you're going to get, if you succeed in the 'war on car' campaign against transit and all reasonable planning principles (including traffic planning), because population growth.

I'm still ready for an IQ challenge, but seriously how could that wingbat ever think.

Terry Troll. Has a nice 'campaign' ring to it.

Glad he isn't running in Ward 8 this year.

He never seems to understand that regardless of his point, the action is not right.

I have previously writte about Mr. Whiteheads phony claims when it came to improving Herkimer Street in my neighbourhood. Alas, it seems that, as the proverb states, some leopards don't change their spots.

Any recent response from Councillor Whitehead regarding this article? I'm not on Twitter. Thanks.