Council has punted on transit area rating for 17 years. With an election this October, it's long past time to put this crutch to bed and start really investing in ridership growth.

One of the most pernicious legacies of amalgamation is that it locked in a pre-existing disparity in transit levy rates and service levels between the old City of Hamilton and its surrounding suburban municipalities. Before amalgamation, the suburban municipalities paid the City of Hamilton to provide some transit service from the HSR, but at a significantly lower service level than the old city received. 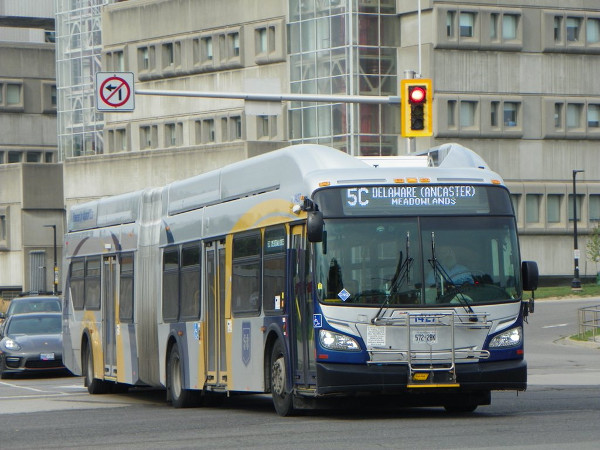 When Ancaster, Dundas, Flamborough, Glanbrook, Hamilton and Stoney Creek were officially merged in January 2001, those pre-amalgamation transit levy rates were grandfathered in, with the result that different parts of the new city of Hamilton continue to pay different tax rates toward transit and receive different service levels.

Because of area rating, any increase in service to one of the lower-rated areas is charged entirely to local ratepayers at that rate, rather than pooled across the entire tax base. As a result, it is politically almost impossible to add new transit in under-served areas.

Transit was not the only municipal service that was area-rated on amalgamation. In 2011, Council voted to harmonize the other service levels - fire, emergency and recreation services - by phasing them out over four years.

However, they punted on transit and decided to leave it alone until the 2014-2018 term of council.

We are now just a few months away from the end of that 2014-2018 term and nowhere closer to a resolution. Early in this term, Council apparently "decided" to punt area rating for transit yet again in a backroom agreement that was never ratified at a public meeting.

As a result, 17 years after amalgamation, we remain the only municipality in Ontario to charge residents different tax rates for transit depending on where they live in the city.

To see how this plays out, imagine a house with an MPAC assessed value of $400,000, which is close to the average assessed value for Hamilton residential properties. Depending on where the house is located, the annual transit tax could be as low as $104 in Dundas or as high as $380 in old-city Hamilton.

Area rating is a clumsy tool for its avowed goal of charging residents based on how much service they receive. Along the borders of the levy areas, there are literally people on one side of the street paying three or four times as much as their neighbours on the other side of the street. That fails the most basic test of fairness or reasonableness.

In addition, area rating myopically assumes that transit service in a given area is only for people who live in that area. That does not reflect the reality of how and where people move around in Hamilton. Most Hamiltonians do not do all of our living, working and playing in the same neighbourhood. Instead, we travel between different parts of the city.

For example, you might live on the west mountain and work in Ancaster Business Park, or live downtown and work in Red Hill Business Park, which are two of the city's designated employment growth centres. However, both business parks are in area-rated parts of the city so they have artificially restricted bus service.

This is economically inefficient and hurts the city's attractiveness to employers, who want to know their employees are able to get to work quickly and conveniently.

Most people who do take jobs in these centres are forced to drive, which raises their transportation costs while increasing the overall traffic congestion, air pollution and injury risk on Hamilton's dangerous streets. Again, none of this makes strategic sense.

At a baseline, ending area rating means harmonizing the transit levy between areas so that everyone pays the same amount toward the total net operating budget, which in 2018 is around $65 million.

A back-of-the-envelope calculation based on the number of households in each area (excluding rural residences, which pay nothing) suggests that a harmonized transit levy of approximately 0.071 percent would evenly distribute the cost of transit across every ratepayer.

Unfortunately, this solves one problem but creates another. Specifically, it results in the cost of transit being distributed across the entire city while the allocation of transit service is still concentrated in the old city and especially the lower city.

That would be unfair to suburban ratepayers, who should reasonably expect to get more service in exchange for contributing an equal share of the cost.

But if the HSR realigned its network to distribute existing transit service across the entire city, the result would be considerably worse transit service on busy transit routes that are already operating over-capacity and generating the lion's share of gross operating revenue.

The best solution would be to increase the levy rate for suburban ratepayers without lowering the urban levy rate, in order to increase the total HSR operating revenue and add new service to under-served areas without cannibalizing existing services.

Councillors often claim this can't be done - that the phasing out of area rating per se needs to be revenue-neutral - but Council also determines the total HSR operating budget as part of its annual budget process.

I cannot find any statutory reason to prevent Council from increasing the total HSR budget each year that it phases out area rating, such that the old city continues to pay the same net rate while the suburban rates are harmonized.

This would bring in a major infusion of new operating revenue that can be allocated to expand service in busy, over-capacity routes and along under-served suburban corridors at the same time. That way, everyone would directly experience the benefits of new transit investment and the network as a whole could be designed to operate more effectively.

In Hamilton, transit ridership remains stagnant year after year. Local politicians like to claim that this is part of a head-scratcher of a continental trend, but that's just not true. Cities that are investing in high-quality transit networks are enjoying significant year-over-year growth in ridership while we tinker around the margins of our crisis-riddled transit system and continue to barely tread water.

To be sure, new money alone is not going to turn the HSR around. That endeavour needs a real commitment of vision and leadership from Council, executed by an effective management team that is inspired and empowered to aim for excellence instead of just managing the decline.

But there is no excuse to sit back in mock impotence and do nothing while the structural dysfunction of Hamilton's transit area rating system persists year after year. With a municipal election coming up this October, I implore voters to pay careful attention to what the candidates promise to do to address this.

I'm glad that Ryan recognized the difficulties surrounding this issue from a suburban standpoint. Asking Ward 15 for example, that has one decent bus route that connects solely with the Aldershot GO Station to pay full boat on Transit without addressing their transit needs would be a tough discussion. That being said, I agree with what is being said here. A gradual, sensible phase in of new rates coupled with a raise in the HSRs budget and an addition of services to justify those new taxes could be feasible. Ultimately I think at least a few current suburban councilors would need to go in order to make this work.

Very insightful analysis, Ryan, that points out how something just has to be done after seventeen years. Since the four-year phase-out was used previously for other city services that approach might minimize the political fallout.

One thing that would concern me though is that equalizing the transit levy for all built-up areas could lead to unreasonable expectations. Unfortunately, you need density for the economical operation of transit and this is not something that you generally find in the suburbs. Even with your proposed funding increase, the HSR would not be able to offer the same quality of service to outlying areas that it currently operates on some of its busier corridors. Suburban residents might not be happy with hourly service that does not operate in the evening or on weekends.

Try explaining implementation of a Transit tax to someone who lives in Lynden, Carlisle & all the other little villages along Hwy 6 & Hwy 5 West of Hwy 6 in current Wards 14 & 15. Heck, most of those places don't even have sidewalks, Police Patrols or street lights.

It is a reasonable expectation that the transit levy would equalize only for the suburban sections of the Wards and not for the rural areas. I do not think any reasonable commentator would suggest otherwise.

Interesting to see how that would work out for the new Ward 14 which is a mixture of Urban-Rural? Possible homes on one side of street pay full transit tax & other side Zero?

When the Region of Ottawa- Carleton was created in 1970 out of the old, old city of Ottawa and the mostly rural communities of the old Carleton County. Similar to Hamilton today, the city of Ottawa had very reasonable transit service but the new suburbs of Nepean, Glouceste, Kanata (created from parts of Goulburn and South March Townships), Vanier ( recently renamed from Eastview to Vanier by it's majority franco-Ontarian residents) and Rockcliffe as well as the 6 rural municipalities, all of which had very little or no transit service at all

In those early days the newly created O.C. Transpo (1972) took over some very small rural and suburban bus operators most of whom were actually private operators. The small size and the the extreme age of the newly acquired fleet of buses made most of these units nearly useless to O.C. Transpo. It took 4-6 years just to grow the fleet and it's support services. One new bus garage built around 1972 on the same property beside the existing 1959 garage and a new one in Nepean built in 1977. It also was at that time that, talk for a rapid transit system was beginning. The early design work for what eventually would be the Transitway Network began in the 1974-1978 period. This work was only tolerated by the public because there was visible improvement to the suburban bus network. Keep in mind that, this was in an environment were most of the residents in these newly served areas were actually very positive about having transit. They didn't like their taxes going up but the majority realized that they were getting something for those taxes. I don't honestly get the impression that a lot of the under serviced Hamiltonians are ready and waiting for improved transit service however, I don't live there so, I freely admit that I could be wrong on that point.