Young was writing about then-President Richard Nixon, but his words continue to resonate in our Trumpian world. 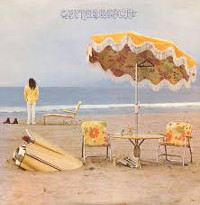 Forty four years ago this past July, (1974), Neil Young released his epic album On the Beach. In "Ambulance Blues", he penned the lyrics that, in our Trumpian world, are more relevant than ever:

I never knew a man,
who could tell so many lies.
He had a different story,
for every set of eyes.
How can he remember,
who he's talkin' to?
I know it isn't me,
and I hope it isn't you.

He was, of course, referring to then-president Richard Nixon, or "Dick", who lived up, or down, to his name. With poetic justice, Nixon resigned in disgrace a mere 21 days after Young's album came out.

But when it came to lying, Nixon was a rank amateur compared to Donald Trump. At least Nixon tried to cover up his deceit, (see: Watergate, the Rosemary Woods two-step resulting in huge gaps in the secret Whitehouse tape recordings, and so on) because Nixon still had an iota of shame at his soul for hoodwinking of the American people.

Nixon also distrusted the media, as do many political leaders, but even Nixon would not go so far as to quote Josef Stalin by stating that the free press is "an enemy of the people," as Trump has done on several occasions, to the point of inciting violence against members of the press.

That this has influenced the behaviour of some Canadian politicians and even protestors is a sad spillover from our American neighbours. See, for example, Ontario Social Services Minister Lisa MacLeod responding with "fake news" when accused of breaking a promise to maintain the Basic Income pilot, which, among other programs, Ford immediately scrapped.

The upshot? Unfortunately, Neil Young was right in 1974 and even more so today. And they call it democracy...

Grant Ranalli lives in Hamilton and works as an elementary school teacher.