Change is Scary but LRT Plan is Sound

Every city that builds LRT goes through the same angst. Soon we will look back and wonder how we could have ever been so scared.

The city of Hamilton has been planning rapid transit along the east-west B-Line corridor since 1960 - 58 years and counting. It is by far the busiest transit route in Hamilton, carrying 9 million trips a year - more than 40 per cent of the total. That is despite the HSR operational crisis of daily missed routes and pass-bys from overstuffed buses. The latent demand for transit along this corridor is much higher than current ridership. 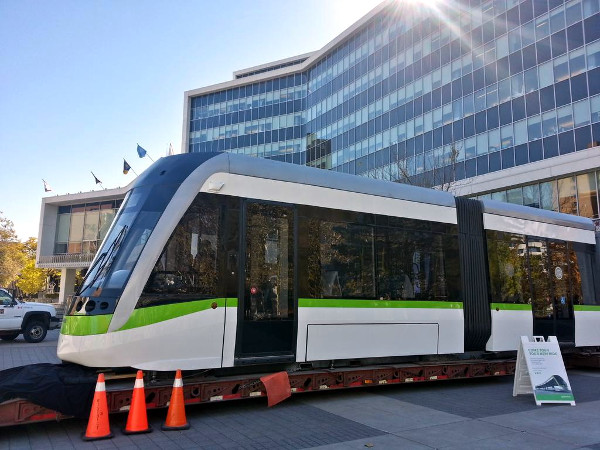 There is a limit to how many buses you can pack onto a route. Once the headways get short, buses bunch up together and the system stops working effectively. This corridor needs rapid transit, and the two main options are bus rapid transit (BRT) or light rail transit (LRT).

Both are highly disruptive during construction, since the road bed needs to be rebuilt in either case - BRT destroys asphalt roads so it requires a concrete surface. Both run on dedicated, physically-separated lanes with stations where passengers pre-pay for faster boarding.

For a system with the current and projected ridership of this corridor, LRT makes more sense. It's cleaner, quieter, smoother and more fully accessible. Most crucially, it provides a much higher peak passenger capacity at a significantly lower per-passenger operating cost, since an LRT vehicle can carry 2-3 times as many passengers as a bus, or 4-6 times as many when coupled.

The last point is particularly important. Suburban development entails the need to build and maintain a vast network of expensive, low-density infrastructure (roads, water, sewer, EMS, and so on) that costs more over its lifecycle than the city collects in suburban property tax revenue.

The City conducted a rapid transit feasibility study in 2008 and concluded that LRT has a higher capital cost but provides a much bigger overall benefit. With provincial approval, the City spent the next several years developing an LRT plan and a funding request, which Council submitted to the Province in 2013.

Metrolinx reviewed the City's plan and came to the same conclusion as the feasibility study. McMaster Institute for Transportation and Logistics also reviewed the plan and concluded that it can succeed as long as the city implements supportive land use and transportation policy. (This is already happening.)

In 2015, the Province accepted the City's plan and confirmed full capital funding with a construction timeline starting in 2019. So far, they have spent more than $100 million bringing that plan to fruition. Earlier this year, Metrolinx issued an RFP to a shortlist of qualified companies to build, operate and maintain the system.

Absolutely nothing has changed in the past decade to weaken the case for LRT. This is a good plan, carefully developed and reviewed by multiple agencies to ensure it follows sound planning and transportation principles.

Every city that has built an LRT system - and there are more than 400 around the world - has gone through the exact same angst that Hamilton is going through right now. Change is scary, and it's hard to imagine the city looking and working differently than it does today.

When Calgary was building its first LRT line in the late 1970s, critics mocked it as "Little Ralphie's Train" after Ralph Klein, then the city's mayor. Calgary's LRT is now one of the most successful rapid transit systems in North America and has undergone several extensions.

In car-oriented Charlotte, North Carolina, the project was very nearly cancelled in 2007 after it was already under construction. Yet hardly anyone in Charlotte today still thinks it was a mistake, given the billions of dollars in new development, dramatic increase in transit ridership and revitalization of the urban neighbourhoods it serves. An extension already went into service this year.

And Waterloo Region is less than an hour away: their LRT is not even open yet but has already attracted more than $2 billion in new transit-oriented development.

Hamilton is not in some Bermuda Triangle of urban planning where universal principles of city building somehow don't apply. We are a normal city going through the normal growing pains of moving into an unknown future. We have carefully studied what works in other cities and have a good plan we are implementing here. Soon we will look back and wonder how we could have ever been so scared.

This article was first published in the Hamilton Spectator on June 18, 2018.

We love subways, rapid underground transit — unlike the LRT that they rip up two lanes of road traffic and they clunk along the street, antiquated system...

Remember, change is scary and bad. I'm against it!

Now that I've said that folks in Hamilton can do anything you want with the $1 billion for Hamilton's LRT, here is a suggestion for you: Use the $1 billion to build a subway!

Why have a LRT stretching all the way across Hamilton, when for $1 billion you can buy over two kilometers of subway!