Bush Lady by Alanis Obomsawin to be Re-Issued

The rare, long out-of-print album has been remastered and is being released on 180-gram vinyl and CD with updated artwork and liner notes on June 15

Elegant, eloquent, and energetic are words that embody the spirit of Alanis Obomsawin, songwriter, singer, story teller, visual artist, and documentary filmmaker extraordinaire. At the age of 85, the unimposing activist is reissuing her 1988 album Bush Lady. The rare, long out-of-print album has been remastered and is being released on 180-gram vinyl and CD with updated artwork and liner notes on June 15th. 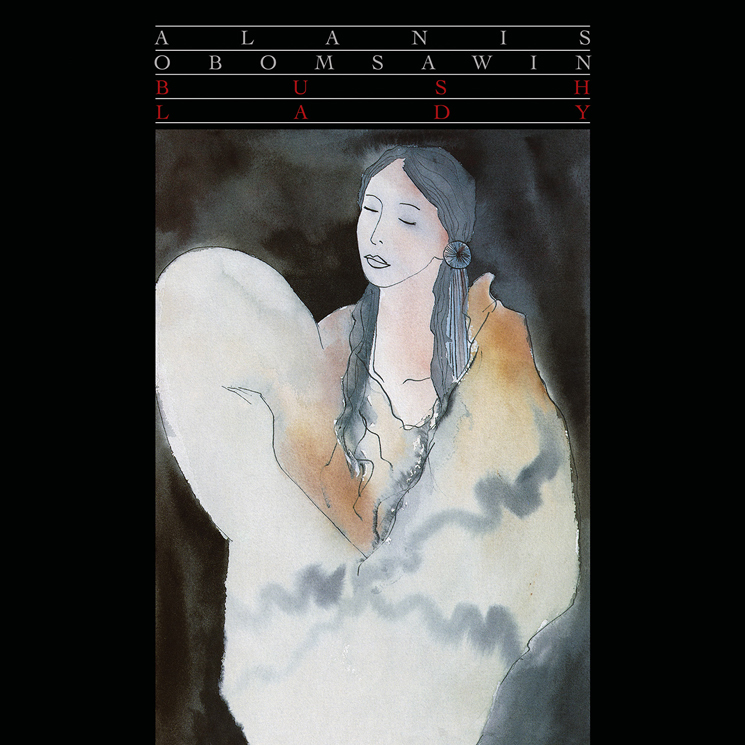 Originally born in Lebanon, New Hampshire, Obomsawin moved to Odanak, Quebec with her mother when she was six months old. It was the reservation of her parents' birth. Obomsawin is from the Waban-Aki Nation, meaning People of Sunrise. Originally, their land included all of New England and the Eastern Townships of Canada, including New Brunswick, Nova Scotia and the southern part of Québec. Groups of Waban-Aki people still live in all of these areas.

To people familiar with Obomsawin's plethora of documentaries - 50 to date with more to be released - it's often a surprise to learn that singing and story-telling launched her seven-decade career. But, performing on stage did not come easily because as Obomsawin states in the liner notes, "It was hard getting up on stage." Part of this hesitation comes from the fact that, "I can't read or write music. My traditional singing doesn't follow those scales. At least that's what I've been told. My purpose is to preserve and maintain the history and culture of where I have been. That's why I sing."

"Bush Lady," songs two and three, are, "Dedicated to all my sisters who live in despair in the skid rows of North America." A fitting gift to the women and girls living with intergenerational trauma and severed from their traditional ways of life thanks to colonization and the femicide it imposed on First Nations women and girls.

The Indian Act, created in 1876, is a paternalistic government policy crafted to assimilate First Nations peoples through enfranchisement. Metis and Inuit peoples are exempt from the Indian Act.

Enfranchisement is the legal process for terminating a person's Indian status in order to impose full Canadian citizenship upon them. Most often, this citizenship was executed without consent and was really forced disenfranchisement.

The act gave government agents the power to enforce government policy effectively controlling every aspect of the lives of registered First Nations peoples as well as the reserves they were required to live on.

These powers included registering births and marriages; establishing who was eligible for status; and administering punishments when rules were contravened.

Dependence of First Nations women on First Nations men began in 1851 when the federal government established that in order to be considered First Nations you had to be male, be the child of a male, or be married to a male.

First Nations women became non-entities and had their independence stolen because status was directly dependent on having a prescribed colonial relationship with a First Nations male. This policy birthed the terms Status and Non-Status.

When a First Nations woman loses her status, she's denied treaty benefits; health benefits; the right to live on reserve, to inherit family property, and to be buried on reserve with her ancestors.

Should a First Nations woman marry a First Nations man from another band she forfeits her right to remain in her band and is forced to join her husband's band. This effectively ended the tradition of maternal lineage a concept foreign and threatening to patriarchal colonialism.

Division of property and inheritance under the Indian Act meant First Nations women couldn't own land or marital property unless widowed. But, even widows were prohibited from inheriting their husband's personal property unless deemed of good moral character by the local government agent.

According to Obomsawin's liner notes, "Despite a stated commitment to eliminating discrimination in the Indian Act, there still remain discriminatory provisions."

Song five and six titled "Theo" after Obomsawin's Aunt Alanis' partner retells the destruction and annihilation endured when Rodger's Rangers massacred almost all the children, women and hunters of the Odanak Nation in the autumn of 1759 while their warriors were fighting at the Battle of the Plains of Abraham.

"NZI WALDAM," a mere 1:01 minute long, recounts the lamentations of a little girl after the raid destroyed everyone she loved and cared for and the only life she'd known. This is the seventh and last song on the album.

Bush Lady the album is a recounting of First Nations experiences with colonization shared through song. But, it's so much more than that. It's a gift that offers First Nation peoples who were robbed of their families, culture, traditions, way of life, spirituality, and connection to Mother Earth a link to the past and an understanding of the paternalistic forces and policies that laid the groundwork for the residential school system and sixties scoop that would follow. It also explains why there have been, and continue to be, so many missing and murdered First Nations women and girls.

Bush Lady is also very much a gift for settlers. These hauntingly melodic songs reveal the lived experiences that can be traced to destructive government policies, a blatant disregard to honour treaty rights, premeditated genocide, and unbridled racism executed against First Nations peoples across Canada.

Bush Lady offers settlers an opportunity to educate themselves about the horrific truths behind the founding of this nation called Canada. It's a place from which to move forward learning more about the treatment of First Nations peoples as settlers engage in meaningful dialogue and timely reconciliation with the peoples of these founding Nations.

Make time to be carried away by Obomsawin's passionate music and compassionate lyrics for she is truly the most diverse, prolific and timeless artist of our time.

Bush Lady will be re-released on June 15 through Constellation Records.

All proceeds from this reissue will go to Obomsawin and to her designated charitable recipient, the Odanak Abenaki Museum.