By Elise Desjardins and Kevin Love
Published May 02, 2018

It is with great pleasure that we can announce some exciting new enhancements to the previously announced Jane's Rides.

Friendly Streets Hamilton, a collaborative initiative of Cycle Hamilton and Environment Hamilton, will be joining us on the Downtown-to-Hospital ride on May 5.

Over the past year, the project has been working with the Hamilton General Hospital and surrounding neighbourhoods to secure safer streets for walking and cycling for all community members.

With support from senior staff at the hospital, Friendly Streets will explore alternative pathways for walking and cycling to the hospital and Barton Village BIA.

The goal of this "mini pilot" is to look at ways that we can use existing space in the city, like alleyways, for healthier active travel routes. You'll hear more about the work that Friendly Streets is doing on the ride.

The Friendly Streets pilot phase in 2017 revealed that street-level air quality is a common concern among community members. While air quality was not a focus of the pilot phase, we have an opportunity with new funding to integrate air quality data collection into the street audits that we do on foot and by bike.

During the Jane's Ride, we will use air monitors to measure respirable particulate levels (PM2.5) during the ride and to discuss urban air quality challenges that community members face. We will compare the collected air quality data on the ride/walk through the alleys to collected data along major arterial routes to hospital.

In Paris, France, it was found that fine particle levels were 25 percent lower on the Seine river quays than the adjacent street which had heavy motor vehicle traffic.

We suspect that Hospital Alley will also have significantly lower levels of pollution than Barton Street.  We hope to explore and map healthier active travel routes to the hospital and surrounding neighbourhoods. 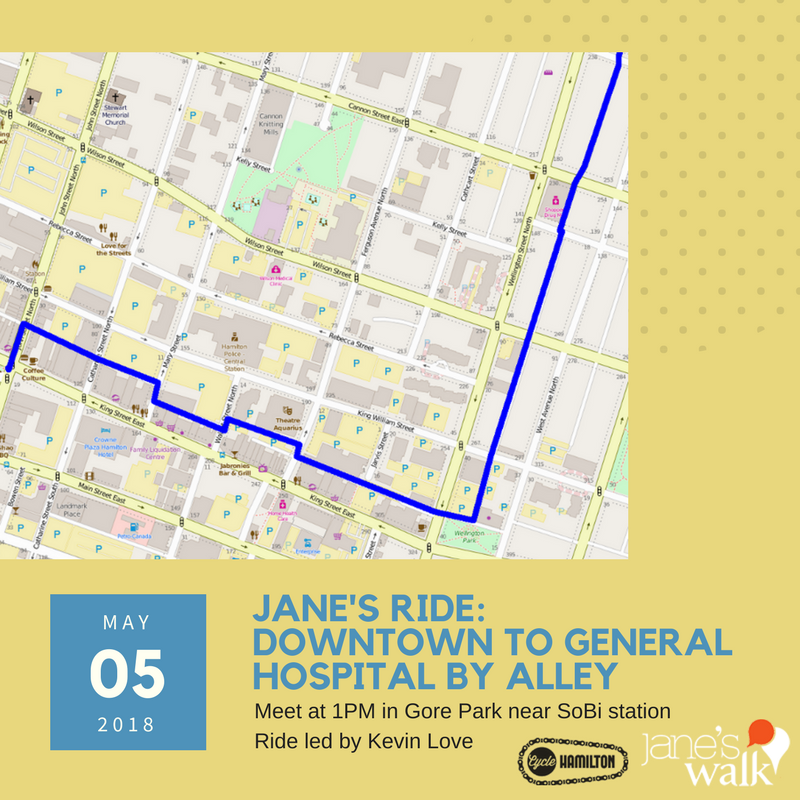 In addition, we will have on the Saturday ride with us one of Hamilton's experts on alley housing, Emma Cubitt. Emma did her Master's thesis on Hamilton's alleys and is currently an associate at Invizij Architects.

She will provide commentary on what can be done with appropriate alley in-fill housing on the May 5 Downtown to Hospital ride.

The Downtown to Hamilton General Hospital Alley Ride is on Saturday, May 5.  It starts at 1:00 PM in Gore Park at the SoBi station by the statue of Queen Victoria.  It will last approximately 2 hours.

The Durand - Kirkendall Alley Ride is on Sunday, May 6.  It starts at 1:00 PM in Durand Park at the SoBi station.  This ride will last approximately 1 1/2 hours.

For maps of the rides and further information, please see:

Elise Desjardins is a project manager for Cycle Hamilton who is working on the Friendly Streets Hamilton project, which is a collaborative initiative with Environment Hamilton.

Kevin Love is a professional accountant and a retired infantry officer with the Canadian Forces. Kevin keeps encountering people who were students of his father, Dr. Robert Love, who was a professor at MacMaster University from 1977-2008. He lives near Durand Park in Hamilton and is currently Vice-Chair of the Hamilton Cycling Committee.