Hamilton Needs LRT to Grow Out of Our Infrastructure Hole

Without LRT, we are a city adrift with no Plan B to get our finances in order. Killing LRT now would send a devastating message to the world that Hamilton is a reckless and unreliable place to invest.

Less than a week after confirming that a Progressive Conservative government would honour Hamilton's light rail transit (LRT) funding commitment, PC leader Doug Ford threw a grenade into the works when he went on to claim that if Hamilton doesn't want LRT, we would still get the money for whatever we want.

First of all, let's be serious. Ford as premier would be starting with a $2-billion hole in his budget after pledging to scrap his party's proposed carbon tax, and he has promised to cut another $4 billion with no plan on where to find the savings.

No reasonable person thinks Ford will just cut Hamilton a cheque for a billion dollars with no strings attached.

The LRT funding is confirmed, committed, budgeted and being invested as Metrolinx acquires property. LRT is already underway, whereas Ford's offer is an unbudgeted campaign pitch from a politician known for a casual relationship with the truth.

In any case, the best investment we can make for the long-term financial health of the city is to reaffirm our commitment to LRT.

Overall, we have more than $3 billion in deferred spending and we keep adding to it each year.

Even if we could apply the $1 billion directly to that backlog, it would do nothing to transform the fundamental driver that is causing us to rack up a backlog in the first place.

Hamilton has been building low-density, single-use suburban sprawl for decades. That form of development requires vast expanses of road and kilometres of water, storm and sewer lines. People have to drive to get anywhere, increasing wear-and-tear on the roads. Police, fire and ambulance also have to drive longer distances.

Historically, development charges have only covered 60 per cent of the infrastructure capital cost of new developments, and property taxes are not enough to cover maintenance and replacement.

We have four options to respond to this:

Option 1 is unsustainable. Option 2 is likewise limited. If we sell off our civic buildings and parks, we lose the ability to provide basic municipal services. Option 3 is limited by the public's willingness (and ability) to pay higher tax bills.

That leaves Option 4. The only way to grow the tax base without also adding still more infrastructure we can't afford is to add ratepayers by building upwards at higher densities on land that is already serviced. 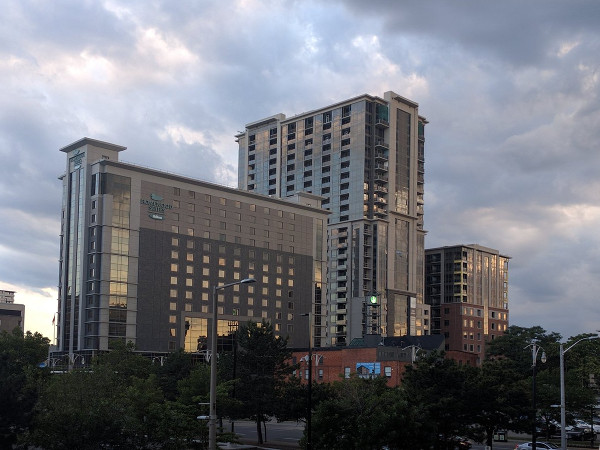 The numbers are impressive. Take just one example: before 150 Main Street West was redeveloped, the property paid $38,000 a year in property taxes. Once it is completed, the estimated property tax will be $510,000 a year — a 13-times increase!

Now think of the huge potential to redevelop all the vacant buildings, gravel parking lots and empty spaces along the B-Line LRT corridor. LRT provides a necessary catalyst for new transit-oriented developments that grow our tax base and bring in extra revenue without adding to our infrastructure burden.

Growing upward is the only way we can pull ourselves out of the infrastructure hole, and we need rapid transit to achieve that growth in order to accommodate so many new people and trips along a dense corridor.

In Waterloo Region, they calculated that the cost of not building LRT would be a lot higher than building it.

Their LRT hasn't even begun service yet and they have already achieved more than $2 billion in new transit-oriented developments along the LRT corridor. Planning for LRT's Phase 2 is already underway.

This kind of growth is exactly why Hamilton also pursued LRT funding. It is the centrepiece of our long-term growth strategy. Our downtown core is already being transformed with major new projects, and developers cite LRT as a deciding factor.

Without LRT, we are a city adrift with no Plan B to get our finances in order. Killing LRT now would send a devastating message to the world that Hamilton is a reckless and unreliable place to invest.

I can't imagine a more negligent and atavistic betrayal of Hamilton's potential than to squander this essential investment in our long-term financial health.

This article was first published in The Hamilton Spectator.

Nice piece Ryan. I read it on the Spec website this morning.

It makes for a powerful case, at least with councilors who may be on the fence.

The others whose minds are made up will likely defer to "what I'm hearing people want" argument, and the Snuffleupagus of the home-runs that could be had all over the city if we use the money evenly across the wards.

They won't care about outsider perception of the city not being 'open for business' either, which is still prevalent I think despite the advances of the past decade. But perception is huge. KW reinvented itself from an ageing industrial region to a progressive one embracing and supporting the tech sector, and has become a focus of pride for the province and target for its investments... which have comprised more than shady pre-election promises.

I wonder if a two thirds majority will be needed to cancel the LRT in this case?

If so maybe the downtown councilors should consider trading their discretionary funding to the mountain wards in return for their support. Wards 1 to 5 get about 1.5 million per year. Since they will all be getting far more than that in infrastructure improvements related to this project, it shouldn't be too hard for them to forgo 1.5 million a year over the 4 or 5 years it takes to build it.

If this analysis were to be run in Hamilton we would almost certainly get the same results. So perhaps the mountain wards should refund this money to the downtown.

In a perfectly rational world, sure that makes sense. Those councilors don't care about mathematical gymnastics. They need something to give to their constituents in return for the 'downtown getting everything'. Each downtown ward will be getting millions of dollars of improvements from the LRT project. Will they really miss 1.5 per year?

Personally I'd be happy to give that up if it meant keeping the LRT on track.

Or how about we push back against the blatant lie about "downtown getting everything."

The city spends over twice as much per household on the suburbs vs. downtown. "Suburbs getting everything" is a less inaccurate statement (although still inaccurate!).

Or how about talking about increasing suburban property taxes so that the property taxes raised in each ward would balance the costs of City services provided to that ward. The taxes raised could then be used to address the infrastructure maintenance backlog.

Ok ok ... I just hope the votes are there when the LRT is inevitably challenged again.