Comparing Space Efficiency of an Automobile Lane and an LRT Lane

A lane of LRT can carry up to several times as many people as a lane of cars.

One of the arguments I continue to hear about Hamilton's Light Rail Transit (LRT) system is that dedicating two lanes of King Street to LRT will disrupt traffic - as if "traffic" only means "people in cars."

Of course, traffic is people moving, not just people in cars. Still, there's a lingering perception that an automobile lane carries more people than an LRT lane.

First of all, we need to calculate the number of people that an automobile lane carries in an hour. The generally-agreed maximum automobile throughput on an arterial street is in the range of 500-1000 vehicles per lane per hour.

Interestingly, there is an inverse correlation between average vehicle speed and peak throughput: at higher vehicle speeds, drivers have to leave more headroom and the total number of cars a lane can actually accommodate in an hour goes down.

Most Hamilton arterial streets have speed limits of 50 or 60 km/h, but traffic speeds are generally a bit slower during peak driving times in the morning and afternoon rush hour, so let's use the peak capacity at 40 km/h, or 900 vehicles per lane per hour.

Next, we need to calculate the number of people that an LRT lane carries in an hour. The type of LRT vehicle that Hamilton is likely to get has a capacity of 150-250 passengers (depending on the configuration), and that can be doubled to 300-500 passengers if two vehicles are coupled.

Let's be conservative and take the mid-range value of a single vehicle, or 200 passengers. With six-minute headways (i.e. one vehicle every six minutes), there will be ten LRT vehicles in an hour. Multiply 200 passengers per vehicle by 10 vehicles an hour, and you end up with 2,000 passengers per lane per hour on an LRT lane.

And the LRT system still has tremendous capacity to absorb additional passengers. A single LRT lane with coupled LRT vehicles running at five-minute headways can carry nearly 5,000 people per hour, or more than three and a half times as many passengers as our car line.

To get a sense of how space-efficient transit is, the following image compares the space used on the road for people in a bus, on bikes or in cars. Remember that a single LRT vehicle can carry three times as many people as the bus in this image. 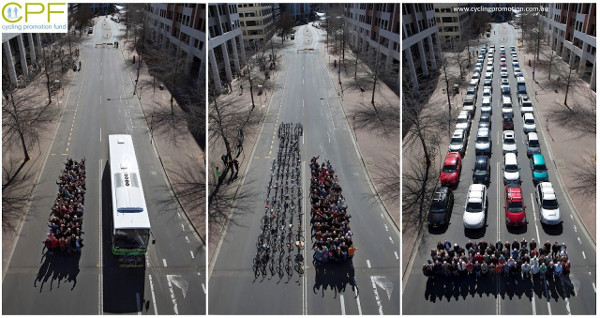 Space on road used for people in a bus, on bikes and in cars

It can be intuitively hard to believe when a dedicated rapid transit lane seems to be sitting empty most of the time, but the extremely high capacity of LRT vehicles means they can carry a lot more passengers than a constant line of people in cars.

Cars are an extremely inefficient use of road space - especially where there is enough lane capacity for cars to drive 40-50 km/h during peak times.

This is the point at which naysayers will shift gears and start insisting that this may be all well and good in a city with lots of transit users, but Hamilton is different and we won't get the ridership here. Again, this is incorrect.

The B-Line corridor already carries around 30,000 transit passengers per day - and that is despite chronic over-capacity buses, routine "pass-bys" where buses are too full to pick up waiting passengers, and, more recently, daily cancelled routes due to the HSR's workforce crisis.

In other words, ridership would jump immediately if we had enough transit service to meet the existing demand, let alone the increased demand that a higher-order service like LRT would attract.

If LRT opened in Hamilton tomorrow, we would have higher per-kilometre ridership than cities like Los Angeles, San Diego, Dallas and Portland on opening day.

And remember, LRT has enormous growth potential in its ridership capacity, whereas there is no way to increase vehicle lane capacity aside from adding more lanes. Along the LRT corridor, the city has already long-since taken over the front lawns of the buildings lining Main and King Street.

The only way to add even more lanes would be to spend many billions of dollars building a second deck on top of the street or demolishing thousands of buildings to widen the street.

It is also worth noting the results from London (England) that each of their new protected bicycle lanes carry up to five times as many people as a motor vehicle lane.

Another way of looking at things is to look at how much street space is occupied by each street user. In square feet this is: