I used to think better communications technology would help more people to understand and support principled activism. A year on Facebook has taught me better.

It has been one year since I began using Facebook. It has been wonderful to catch up with old friends and extended family. The content has been entertaining and, at times, enraging.

Perhaps most significant, however, is the insight this experience has afforded me, in terms of understanding how we have come to the place we now find ourselves at, as a society.

In the summer of 2004, I spent hundreds of hours camped out in the Red Hill Valley, adjacent to the Tree Sitters. I was there to help keep up their morale and to bear witness to the ongoing abuse levelled at them by the city's contracted security guards.

Despite ongoing communications with our local corporate media, the Tree Sitters and their supporters were portrayed as lazy, substance abusing, and unemployed. Indeed, an editorial cartoon by Graeme Mackay published in the *Hamilton Spectator* in July 2004, furthered this false narrative. 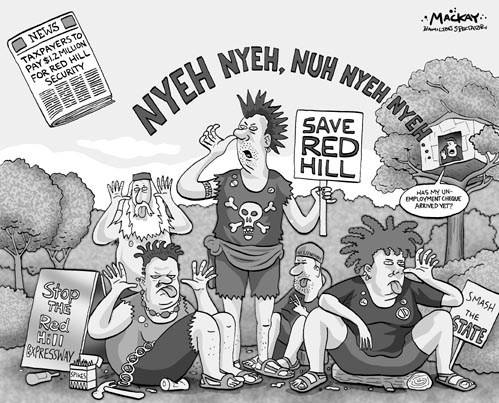 I have to wonder which of the tongue-wagging, pierced, unkempt figures in the foreground is supposed to be me, given that I probably spent more time there than anyone else - although I never once saw Graeme Mackay there.

None of the Tree Sitters were unemployed. Two had taken leaves from their jobs to participate in the action. One was self-employed. The other was a student. His mother had died of cancer and he believed that pollution was a contributing factor in her death. He stayed in the tree for 105 days, only coming down when he had completely run out of food and water.

The Tree Sitters' dedication to this cause was selfless. Few, if any, of their critics could have endured the conditions that they faced while living in the trees.

Apart from being completely exposed to the elements, while living on a 4x8 foot platform, suspended from a branch 50 feet above ground, they were subjected to constant and coordinated harassment by the security guards. I recorded the security guards hurling some of the most vitriolic, misogynist, racist, and antisemitic insults I have ever heard in my life, at the Tree Sitters. And this went on 24 hours a day.

And unlike the rag-tag group of slovenly activists depicted in the news, their supporters included university and college professors, business people, teachers, scientists, and other professionals.

I remember thinking, at the time, that if only we could do something like Edtv, the 1999 movie about a man who turns his life into a live TV show, and stream live 24-hour footage of the Tree Sitters to the world, people would see the truth.

As our technology has developed over the last 14 years, I have often lamented that it was not available to us then. With cellphone technology, solar chargers, and drones, we could have had our own live feed of the Tree Sit.

I envisioned millions of people around the world "tuning in" to see how the Tree Sitters were doing. Nathan, reading his poetry. Vegan, teaching viewers how to re-purpose old clothing. Dana, eloquently explaining the devastating impacts the expressway would have on our environment.

People would sit on their edge of their computer chairs, watching as the platforms swayed wildly in the winds, while thunder and lightning crashed around the Tree Sitters.

In my mind, the outcome would have changed. People would have had an opportunity to see the truth. And when given the truth, they would have understood what was at stake. Tens of thousands - if not millions - would have demanded the city abandon the project. And the Tree Sitters would be seen for what they were - heroic, selfless, committed, brilliant.

Despite being convinced about this for the past fourteen years, one year on Facebook has completely changed my mind.

When Donald Trump first announced his intention to run for President, I didn't think much of it. While I had obviously heard of him, I knew very little about him. I knew he had been married a couple of times, declared bankruptcy a couple of times, and had made a reality TV show. I had never watched it. I didn't realize he was on his third wife or even that he had kids.

As the campaign wore on, I still wasn't worried. While I was beginning to realize what an ass he was, I didn't really think he had a chance of winning.

That started to change after the Republican convention, but ultimately, deep down I believed that when it got to election day, voters would decide to reject his populist platform and stick with a moderate candidate.

Clearly, I was wrong. Very wrong.

In the days following the election, I struggled to try and understand what had happened. Many years ago, I read a book by Theo Colborn, Dianne Dumanoski, and John Peterson Myers called Our Stolen Future. I would characterize it as a sequel to Rachel's Carson's classic Silent Spring. It went further than Silent Spring. The authors described many studies that were showing that not only is fertility in decline, but so too is our intelligence. Furthermore, they suggested that the chemicals in our environment are also causing animals to behave more aggressively.

Recalling the warnings in this book, I pondered if, perhaps, the authors' fears had been realized and the election of Trump was evidence that our collective IQ was dropping.

I was immediately shocked at the sheer volume of misinformation - and downright lies - that were being spread through social media. Some of this misinformation was being shared by people I knew and, disturbingly, it seemed they agreed with the biases. Overwhelmingly, the biases were anti-immigrant, anti-intellectual, and anti-liberal.

Just as I had during the tree sit back in 2004, I thought that once presented with accurate information these people would see that they had been misled.

Again, I was wrong. The more I argued with people, the more they became entrenched in their position. Even when the logical fallacies were pointed out and they were presented with irrefutable contradictory evidence, most refused to budge.

Herein lies the lesson that Facebook has taught me. While I was familiar with Marshall McLuhan's work, I don't think I really understood it until now. (Okay, so I still don't fully understand it, but it makes a lot more sense to me now.)

In his 1962 book The Gutenberg Galaxy, McLuhan wrote:

Instead of tending towards a vast Alexandrian library the world has become a computer, an electronic brain, exactly as an infantile piece of science fiction. And as our senses have gone outside us, Big Brother goes inside. So, unless aware of this dynamic, we shall at once move into a phase of panic terrors, exactly befitting a small world of tribal drums, total interdependence, and superimposed co-existence...

And so here we are. We have lost our senses and are now inhabited by Big Brother. While a few of us are aware of this, the majority are not. They ingest the soundbites like candy and it rots their brains. They have lost their ability to think critically, creatively, independently.

Our leaders (both visible and invisible) use fear the way computer programmers use codes. And like computers, the masses react predictably.

So that's how we got here.

The question is: How do we get out of here?

I quit facebook last January for most of the same reasons.

Alice, if you ever have anything to offer for the rest of us but your abuse, I'm all ears.

Always happy to work for a better world.

I'm sorry Craig, but I found your comment somewhat cryptic. Could you please elaborate? Thanks, Alice

Thanks for pointing me to this article. It was an interesting read. I teach at a local high school where all grade 9 and 10 students have been given iPads. The kids in grades 11 and 12 have expressed some frustration with being left out, while many of my junior students have exhibited "technology fatigue". They actually seem more excited about having a book in front of them! Some have been actively resistant to using their iPads.