Nethersole acknowledges we're living in hyper-racialized times and that makes it imperative to humanize all people, including those with different gender identities, through theatre and art.

What does it take to be a good child? Or, more specifically, a good son? That's one of the themes explored in Acha Bacha, a new Canadian work premiering in the new year at Theatre Passe Muraille in co-operation with Buddies in Bad Times. A Hindi term of endearment meaning good child, Acha Bacha stars Qasim Khan as Zaya and Matt Nethersole as his gender non-conforming, devout Muslim love interest, Salim. 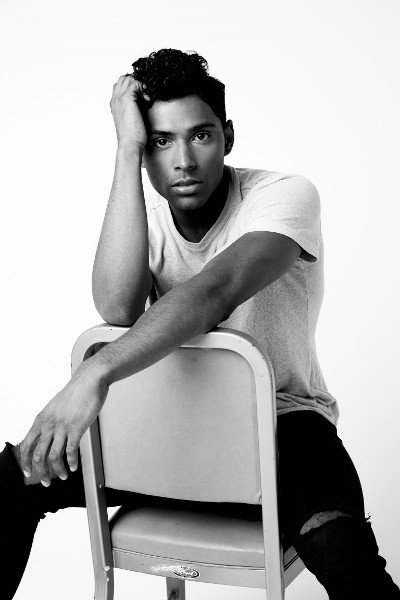 I recently a chance to talk with Matt about this ground-breaking play and his character. The 25-year-old Oakville native studied music theatre at Sheridan college before launching into a career that includes musicals at Stratford, Shaw and the Grand Theatre, as well as many smaller theatre companies.

His growing list of film and television credits include series lead on the Moblees children's show, a dancer on Degrassi Goes Hollywood, Frisah on Little Mosque on the Prairie and a feature part on Ghost Trackers.

Flying home to Toronto after finishing a run at the Mayfield Theatre in Edmonton where he played Ike Turner in a review of Tina Turner and Aretha Franklin, Nethersole decided to read through a play that had been intentionally sent his way.

According to Nethersole, "Reading a play for the first time can sometimes be a tedious task, but I devoured Acha Bacha in no time. These characters are not 'other' and they are not defined by being Muslim or queer. They are human beings, real, complex and fully realized."

By the time the plane landed, Nethersole knew he had to play Salim. "In a time when fear of immigrants and anti-Muslim sentiment seems to be on the rise, Acha Bacha reminds us of the humanity of others and shines a light on a part of life people rarely see."

This is not the first time playwright Bilal Baig has tackled complicated, controversial themes. His play Khwaja Sera (Transgender) premiered in 2017 at Rhubarb - Canada's longest-running new works festival housed Toronto's Buddies in Bad Times Theatre. The play was an exploration of the lives of two twenty-something Muslim siblings separated by geography and living divergent lives.

In Acha Bacha, Baig has successfully crafted multidimensional characters that avoid becoming clichés. Nethersole's Salim is the measured, emotionally intelligent rock in the relationship. Nethersole admitted, "It was the relationship that drew me to the piece. We are so quick as a society to invalidate alternative relationships, convinced that the love between queer, gay and trans people is somehow less valid than conventional love.

"In Zaya and Salim, we see a love that is as common as deciding how to get your partner from Toronto to Mississauga and back for dinner when they don't know how to drive. We see a love that is patient and unfettered with artifice or unearned drama. I am thrilled to be able to bring a character like this to the stage because characters like Salim deserve to be seen and heard and their stories deserve to be told."

For Nethersole, relationships and seeing yourself on stage are important components when choosing parts. In the spring of 2017, Nethersole played James in the Young People's Theatre production of James and the Giant Peach.

A man of colour, Nethersole observed, "The Young People's Theatre has always been ahead of the curve casting people of colour regardless of who 'should' play the part. Leno Akin makes a point of presenting people of colour on stage. James doesn't have to be white, especially in Toronto where there are so many girls and boys of colour. To play an iconic character like that was amazing!"

Nethersole acknowledges we're living in hyper-racialized times and that makes it imperative to humanize all people, including those with different gender identities, through theatre and art. He believes we need to stop reinforcing the same negative ideals and status quo, and that means being discerning and conscious of whose agenda is being served.

When Nethersole played Ike Turner, he consciously chose to shift the attention to Tina and her accomplishments rather than having the audience focus on her abuser and the abuse he inflicted. That way, Nethersole avoided reinforcing the typical angry black man stereotype and was able to concentrate on Ike the musician and entertainer.

Nethersole loves the fact that he is able to act, sing and dance often at the same time. But he's the first to admit that singing didn't come quite as easily. According to Nethersole, "Singing makes you more vulnerable and I was hesitant to share from the heart." Thanks goodness it didn't take long for Nethersole to get over this.

In fact, Nethersole has been spending time nurturing his musical talents and the effort is paying off. On December 4, Nethersole will be hosting and performing in SOULVILLE: An R&B Soul Cabaret featuring Stacey Kay, Alana Hibbert, Dana Jean Phoenix, Robert Markus, Kelly Holliff, Chris Tsujiuchi and many more.

He's also in the process of composing songs for his first solo EP, which muses on relationships and self-discovery. He plans to work on this project while on hiatus between plays. But the way Nethersole's calendar is filling up, there will be very little down time and that means very little time for sleep.

SOULVILLE: An R&B and Soul Cabaret

This article originally appeared on rabble.ca.