Traffic Calming Changes to Slip Lane at Queen and Aberdeen

This week, the City of Hamilton took a small but significant step toward implementing meaningful traffic calming on Queen Street South with changes to the slip lane for southbound vehicle traffic on Queen turning right (westbound) onto Aberdeen Avenue. 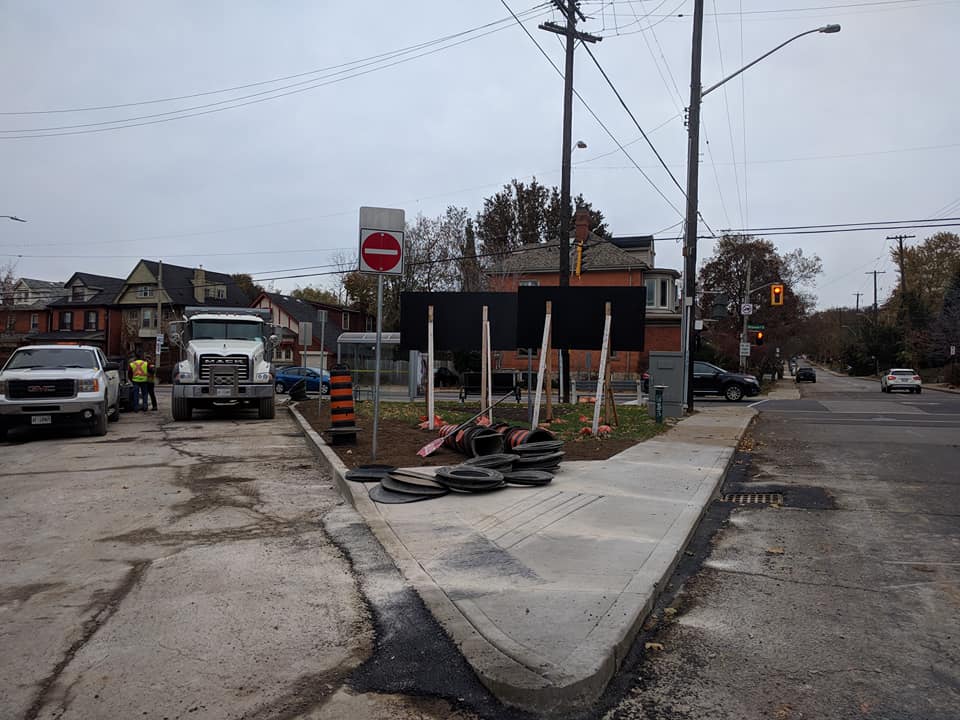 A bumpout has been added on the north edge of the slip lane to discourage speeding into the slip lane, and the wedge of raised curb on the intersection side of the slip lane has been widened to create a neckdown for cars turning onto Queen. The following satellite image indicates where the curbs have been modified:

These physical traffic calming measures accomplish a few important goals: they force drivers to slow down when turning from Queen into the slip lane; they encourage cars proceeding through the slip lane to slow down while approaching Aberdeen; they make it physically impossible for two cars to share the slip lane side-by-side; and they reduce the distance that pedestrians have to walk on the street between the sidewalk and the island.

The work was conducted over a few days this week, during which the slip lane was closed and cars turning right had to do so at the intersection. 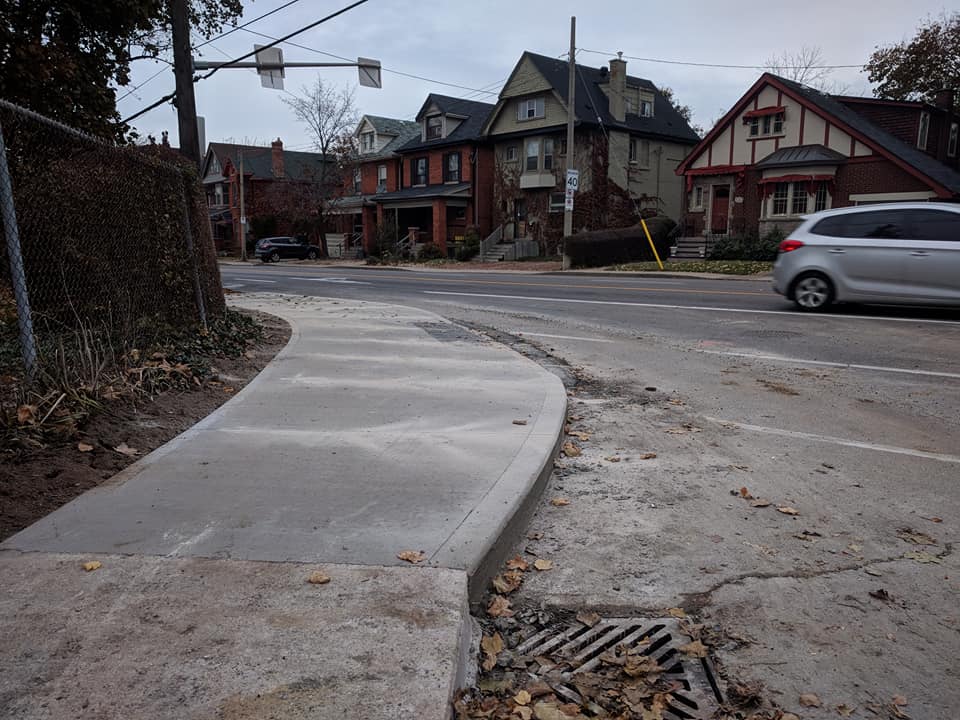 In the following photo, the edge of the grass marks where the curb used to run, and the soil fill indicates where the island was widened. 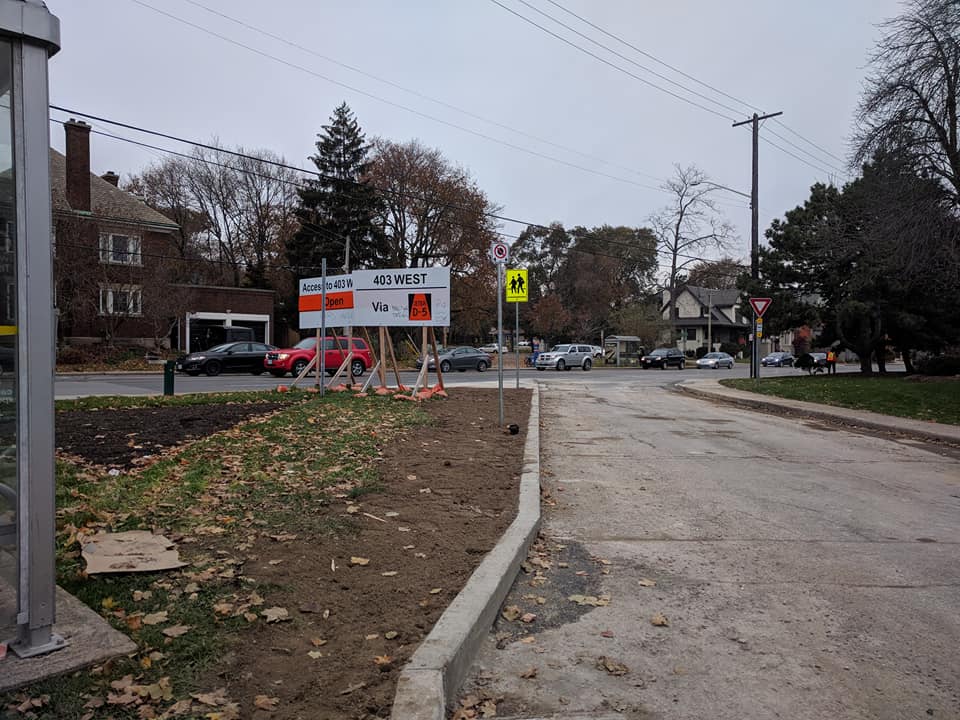 In addition, over last night City staff began painting a zebra crossswalk at the intersection of Aberdeen and Queen. 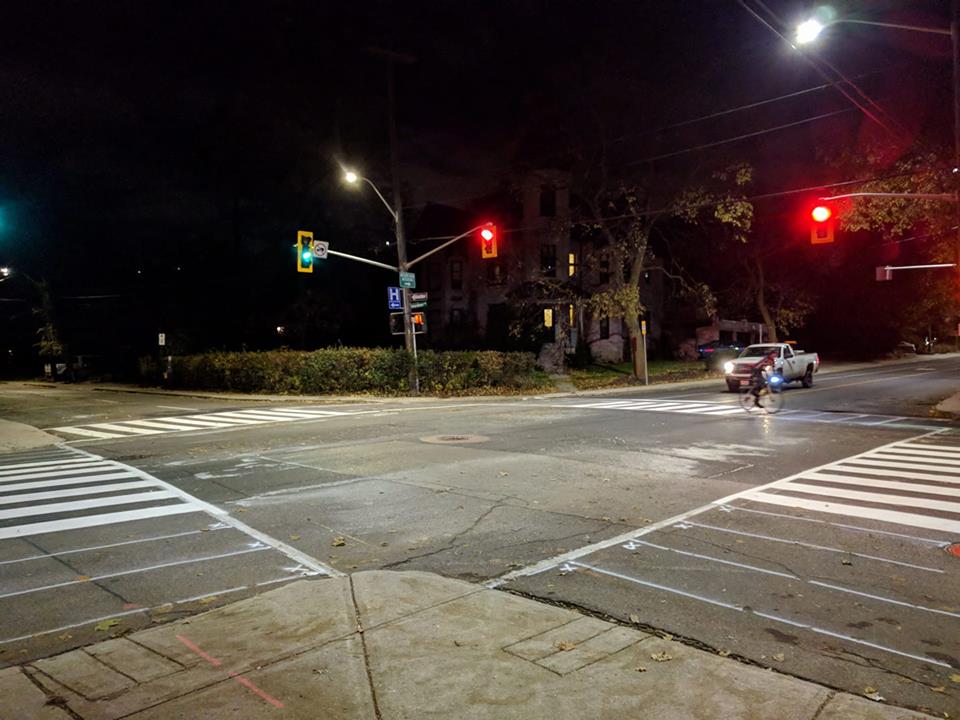 Today, the City also installed new knockdown sticks on the southeast corner of Queen and Aberdeen to give more space to the narrow sidewalk on that corner. This will force northbound drivers turning right (eastbound) onto Aberdeen to slow down. 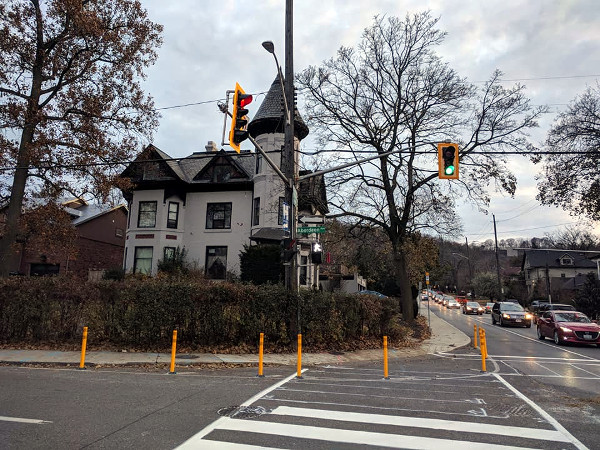 New knockdown sticks on the southeast corner of Queen and Aberdeen 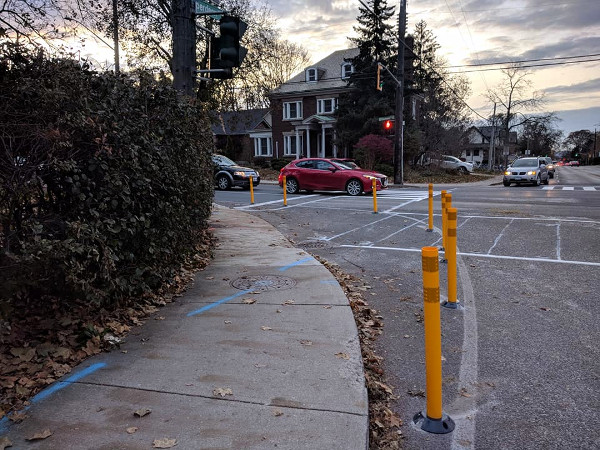 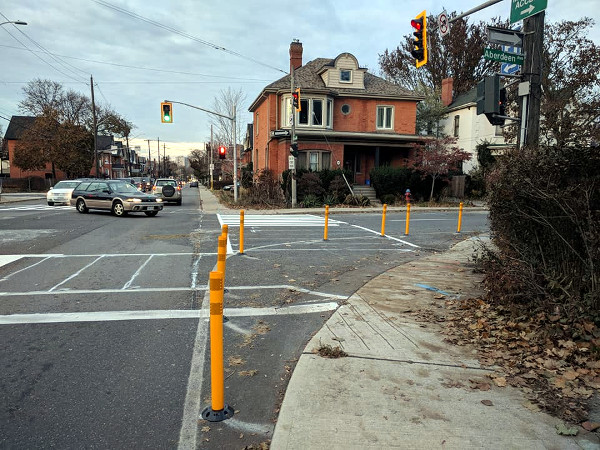 Another thing the City needs to do here is extend the duration of the Walk signal for pedestrians crossing east/west across Queen. At present, it is so short that a fit, healthy adult walking quickly can only get partway across the street before the Don't Walk signal begins flashing.

This is just one of many intersections across the city where the duration of the Walk signal is very short.

The modification to the slip lane, while welcome, is a missed opportunity to fill in the lane completely and just have motorists turn right at the intersection, like most other intersections.

According to the City, there is underground equipment from the old Hamilton-Brantford Radial Line under the pedestrian island and it would be very expensive to move it in order to create a large enough curb radius. There are buses that run south on Queen and turn right onto Aberdeen, so the curb radius needs to be large enough to accommodate those turns. 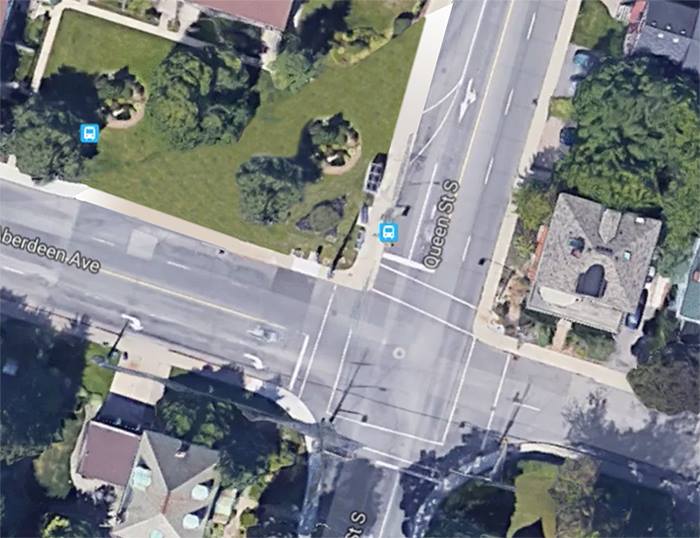 Rendering of a parkette on the northwest corner of Queen and Aberdeen (Image Credit: Alistair Morton, using a Google Maps image)

As an interesting sidenote, you can still trace the old Radial Line right through Kirkendall South neighbourhood in the local changes that remain to this day.

The slip lane, of course, is part of the route, but it continues through the wedge of grass at the southeast corner of Aberdeen and Spruceside, the Mapleside Park, the 1950s infill houses on Mapleside Avenue, Kent Street, Fairmount Avenue and Undermount Avenue, the southwest zig of Glenfern Avenue before South Street, and the Radial Trail where it begins at Hillcrest Avenue and crosses the loop at the top of Dundurn Street South before continuing west through the south part of Chedoke Golf Course. 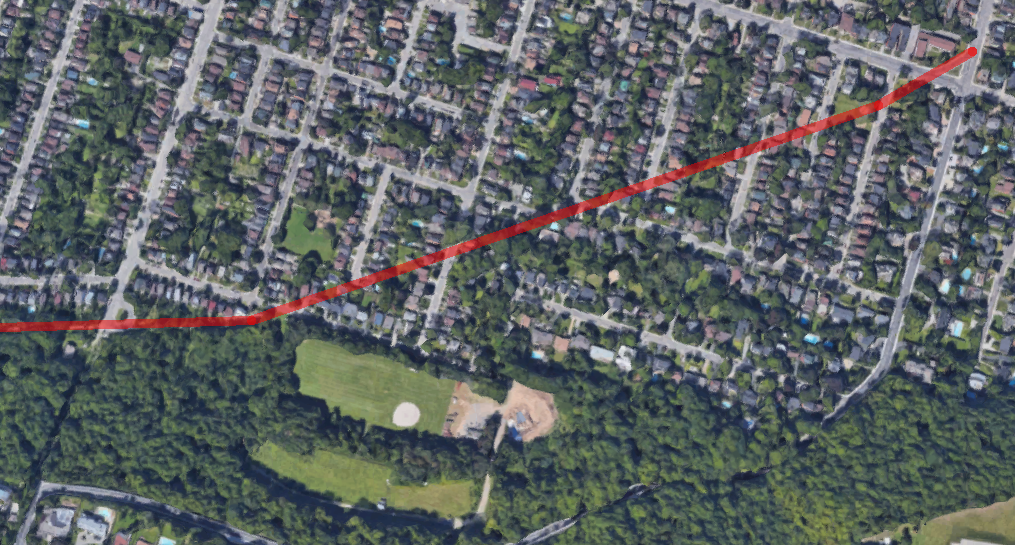 North of Aberdeen, the Radial Line ran along Queen and then diagonally across to Hess between Duke Street and Robinson Street, continuing north to Main Street West, where it turned east to the downtown core.

Update: updated to add a note and photographs about the new knockdown sticks on the southeast corner. You can jump to the added paragraph.

Ryan, these traffic calming measures are welcome change to slow down traffic merging onto Aberdeen. I have noted that these 'slip lanes' tend to encourage 'European cornering' as the car ads describe it (read: speeding). The main problem in the area, still, and always HAS been speeds on Aberdeen Ave itself. If I have to ride on ABerdeen to get from Mountain Ave to Locke St (about 50 m), I almost always ride on the side walk for this short stretch. Better to live to pay a fine than get flattened (for free). Sad that the ridiculous speeds on this street almost demand that cyclists 'break the law' for self-preservation.