Lessons from Vancouver on Easy Ways to Improve our Cycling Network

With some modest improvements, we can continue to increase our modal shift to cycling as it has already begun in the past few years.

I recently returned from a week in Vancouver and made many observations while there which show how that city has managed to get 50 percent of daily commute trips in non-car modes.

Transit in Vancouver is wholly fabulous, and a story for another day. Suffice it to say that in Hamilton, we continue not to invest in transit and it shows.

But on the cycling front I feel we have made a bit more progress. With some modest improvements, we can continue to increase our modal shift to cycling as it has already begun in the past few years.

First off, bike lanes are everywhere in Vancouver. It was fantastic.

More important, I rarely saw a bike lane without physical protection of some sort. Almost none were simply a painted line.

They make extensive use of inexpensive planters and knockdown bollards like we have on Cannon Street.

Even simple bike lanes similar to Dundurn or Wentworth Street have little rubber curbing like we use on Cannon, along with knockdown bollards.

In Vancouver, streets that are wide enough for planters - like York and the upcoming Bay Street Cycle Track in Hamilton - are safely protected from cars with planters and knockdown bollards.

Yet here in Hamilton, along our entire two-way Hunter Street bike lane, we have just one tiny example of this behind City Hall on the hill between MacNab and Park Street. This simple and inexpensive addition of knockdown bollards needs to be added along the entire length of the Hunter bike lanes. 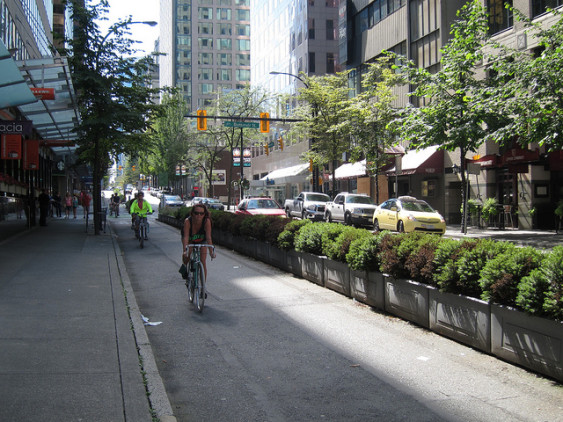 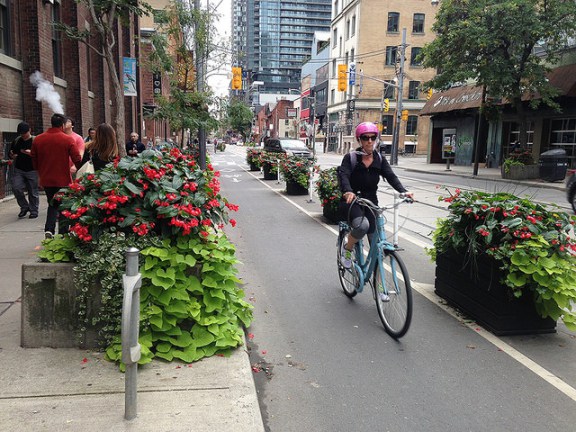 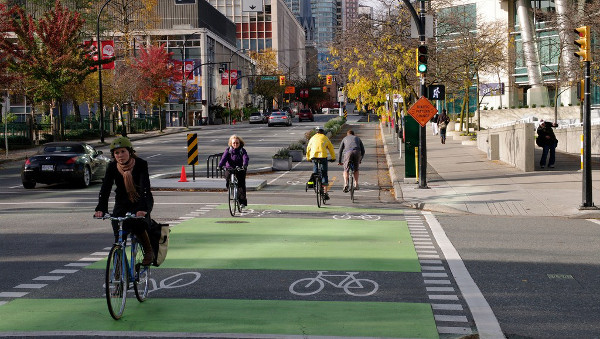 Also, green pavement paint across intersections is well-used in Vancouver and other cities. As the National Association of City Transportation Officials (NACTA) notes in their guide to designing cycle tracks, green paint on 'conflict zones' where vehicle access crosses the cycle track helps with safety while navigating turning vehicles. 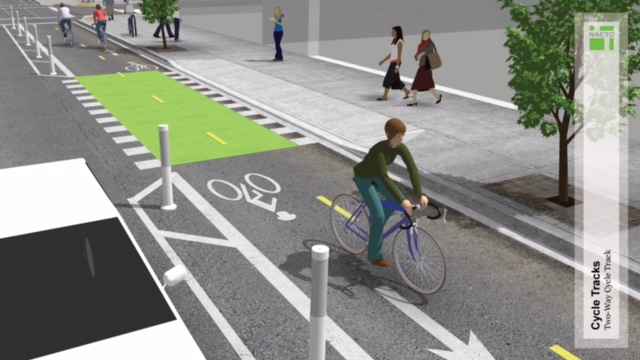 I hope we can make these very inexpensive and modest additions to our cycling lanes. They are cheap and easy but add tremendous safety, which is necessary to lure more people onto our streets with their bikes.

safely protected from cars with planters and knockdown bollards.

The knockdown sticks currently used in Hamilton provide approximately zero safety protection. As the name suggests, they are designed to knock down and not provide any protection. Although certainly beautiful with flowers, the planters are also not designed in accordance with any safety standard. The ones used in Hamilton are easily knocked aside by a car driver, much to the death or injury of the pedestrian they did not protect.

Here is a video of an actual, genuine safety bollard. A bollard shown passing the testing for the safety standard AS/NZS 3845:1999 "Road Safety Barrier Systems." This is the sort of real protection that we need.

About half are (not) wearing helmets. Interesting.