The pace of reinvestment into James St., recently converted to two-way, should be a wake-up call to City Council.

A new food market called Grace Food Market is opening at York and Locke. It will be a Korean, Japanese and Chinese market. Renovations are still underway, but I can't quite tell if there is going to be a small restaurant area yet. This was the easiest update piece I’ve ever done...I noticed it while walking down my driveway to water some plants.

A building in the King and Ray area has been gutted and I presume a renovation will follow. There has been discussion on expanding the King West BIA down to Dundurn, although it’s not looking likely. I would really urge businesses along King West to form their own BIA from Queen to the 403. How about "Strathcona Village"?

The new Westside Concert Theatre sits in the middle of this strip and is now bringing hundreds of people each week into our neighbourhood. Lose a couple lanes of traffic on King, add sidewalks, bike lanes, trees, benches and unique street lights with banners and help create a new vibrant business district.

The surrounding neighbourhoods are very walkable. I'm sure a BIA in this area with some city support in fixing the rotten design of King St would go a long way towards developing a new 'village' in Hamilton with shops, cafes and the like.

T4U Asian Cuisine is opening soon on John South near Jackson. A block south on John near Hunter, the Incognito Restaurant and Wine Bar is opening in the old Chez Benito space.

Being a fan of two-way streets, I am still shocked at the rapid pace of new business openings on both James and John since their conversion. City hall should be falling all over themselves to perform the same city building techniques on all of our downtown streets.

Speaking of James North, If you haven't had a chance to enjoy the soccer celebrations, you're missing out on some great street life. 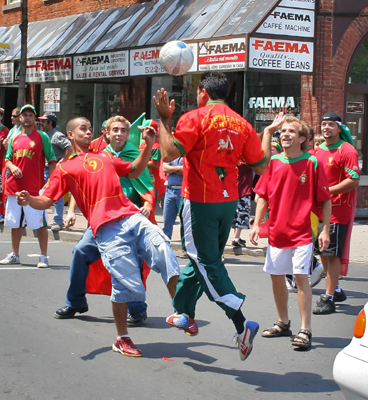 Pho Bo Con is opening a Vietnamese Noodle House on York, near Queen (dang! I love my neighbourhood). I'm still trying to verify this, but this restaurant may be affiliated with a similar restaurant in British Columbia. Regardless, look for this place to become a big hit in the city.

Rumours abound about a new Asian plaza to be built at Cannon and Park and another in the Cannon/John area. Again, referring to James and John Street, this might be the time for a similar move on Cannon and Wilson especially with the upcoming farmers market renovations and burgeoning Chinatown that is trying to develop despite it's people-destroying highway environment. 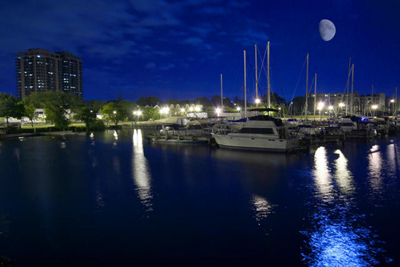 The new waterfront trolley has begun operations at the West Harbour. My family took our first trip during the Canada Day weekend and it was fantastic. Several times along the route our driver was flagged down by passing pedestrians and cyclists who wanted brochures and info on how to ride this trolley.

The design of the cars is perfectly conducive to chatting with strangers and meeting new people. By the end of our ride, we had met a wonderful couple from Burlington who found our waterfront to be far superior to their small Spencer Smith Park. Turns out they too were pastors at a church in Burlington for several years and our family shared many acquaintances with them. Small world on a fabulous trolley. 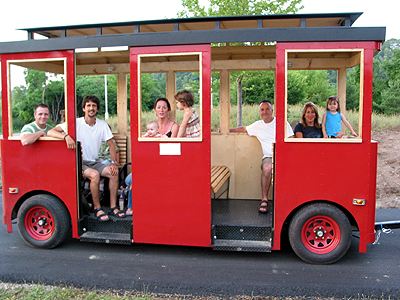 $2.00 for adults, $1.00 for children. The train runs from noon to 7:30 each day from the Ice Cream shop in front of the Williams Coffee Pub on Pier 8. I expect this trolley to be extremely popular and tough to land a seat on.

The Gallery on Locke is now open. Look for their bistro to follow soon.

Renovations continue on the entire building facing the Jarvis Square parking lot on King East. They are now advertising Jarvis Square Condominiums on the sign out front. Hopefully the parking lot will be replaced with a true square someday.

This isn't in Hamilton, but it's too cool not to report: so simple, easy, non-bureacratic (one of the things I dearly miss about Portland), and yet with a major impact in community building, lowering crime, improving neighbourhood relationships and sense of pride and ownership.

The residents of Portland's Sellwood neighbourhood transformed a local intersection into a vibrant public square If Hamilton could ever get out of this horrendous over-regulated, stifle-any-creativity type of mindset we could see things like this happen throughout the city.

Also on the same website is a complete list of nominees for great public urban spaces in North America. Perhaps someone on council could present a motion introducing a Healthy Neighbourhoods agenda which would begin to open the door for these types of local, community-driven initiatives to enhance the sense of community in our great city.