While the manufacturer of Hamilton's LRT LRV is not settled yet, this picture is just a quick visual of what a future Hamilton LRV will approximately look like.

Over the slowness of late summer, it can sometimes be easy to forget what's happening in the Ontario transit scene. This is especially true in Hamilton, where after a flurry of updates, decisions and Council votes this spring, we await further news from the Hamilton LRT Metrolinx Project Office and the Province on the latest Hamilton Council decision to request having HSR operate Hamilton's LRT.

We faced the same situation in Brampton in the summer of 2015. There was a July 2015 Brampton Council vote to try to resolve the LRT alignment question through the use of a third party mediator. The final vote didn't happen until October 2015. During the summer of 2015, we as LRT advocates had to think of lots of creative ways to keep residents engaged in the issue and the supporters we had found.

So, until there is more news on the Hamilton LRT front, I just thought I'd share this Jon Bullock picture of Waterloo Region's Light Rail Vehicle No. 2, taken outside the Bombardier Millhaven plant this week. 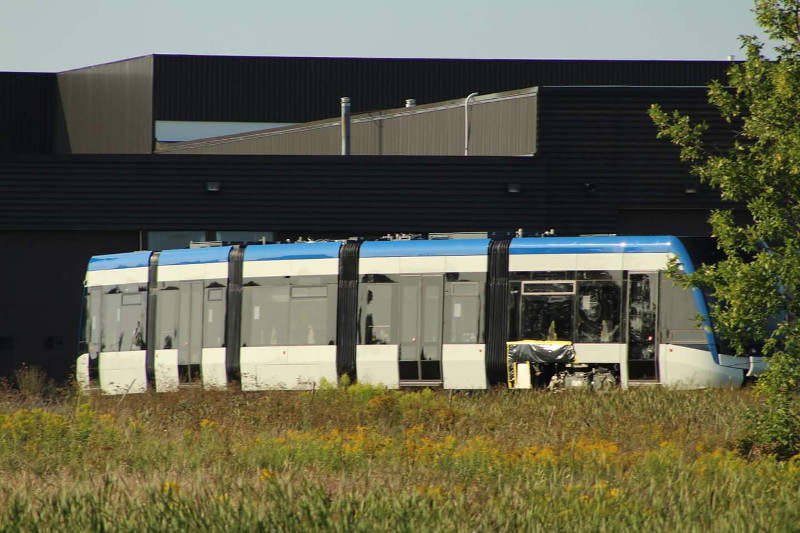 While the manufacturer of Hamilton's LRT LRV is not settled yet, this picture is just a quick visual of what a future Hamilton LRV will approximately look like. Pretty cool, eh? I particularly like the sharpness of the blue on the LRV. Also, does this look like a piece of "old" technology which some anti-LRT folks promote? I don't think so.

Hope everyone had a great summer, and keep up the city-building advocacy, Hamiltonians!

Not to rain on everyone's parade guys but they just had to bring ION LRV #1 back to Millhaven because Bombardier sent it to Waterloo in a in non-operable state and would not bring crews down to change that. However, both ION LRV #2 and the Eglinton Crosstown Pilot LRV were seen doing high speed testing on the Millhaven test track soon after that picture was taken. It seems Bombardier is slowly getting its act together and will most likely have 12 LRV's operational for Waterloo by December 31, 2017.

I wonder if Hamilton will end up getting any of the 61+ Alstom Citadis Spirit LRV's ordered by Metrolinx just in case Bombardier can't deliver on time. What's really sad is that, Bombardier's Flexity family of LRV's are a great product and is the most widely ordered LRV in the world with over 3000 LRV's delivered or on order to over 50 cities on 5 continents since the first model in the late 1990's. Most of the problems seem to be coming from the province's defiant stance that all the Canadian ordered LRV's be made in Ontario. When Bombardier (and Alstom as well) have never built a 100% Low-Floor LRV outside of their European supply and building chain. Only 70% Low-Floor LRV's have been made in Bombardier's North America supply and production chain. Unfortunately, there is a major increase in complexity and building standards when upgrading from a 70% to 100% Low-Floor LRV and Bombardier's Ontario and Mexican workers seem to be the Guinea Pigs.

Where as the Alstom's Citadis Spirit LRV's are only about 25% Canadian content. Parts production and fine manufacturing happening in Europe, with most of the gross large body section manufacturing occurring in their Platsburgh New York plant. Only the final LRV section assembly and testing occur in Ottawa at Belfast Yard. The only thing is that, Ottawa's Spirit LRV's seem to be going along just fine, so far (Fingers Crossed).

Well the TTC in Toronto just put RFI/RFQ about ordering up to 100 new streetcars/LRV's.

The TTC has now also started operational testing of the Pantographs instead of the trolley poles on the new Bombardier Flexity Outlook Streetcars/LRV's. Seen on route 509/510, some rumors of the 512 route but not confirmed.