On September 5, I listened to Burlington Mayor Rick Goldring on CBC radio's "The Current" talking about how Burlington has taken the issue of increased flooding risks from climate change seriously.

That was followed by the excellent Blair Feltmate, head of the Intact Centre on Climate Adaptation, with further information about how seriously flooding is on the rise as the primary threat from climate change in Canada.

You can read a full transcript of the program.

It's great to see municipalities showing leadership on this issue. At least your city might have your back. Meanwhile, larger governments continue to pretend they can pay lip service to climate change while maintaining policies guaranteed to make it worse.

Hamilton, Ontario's most recent, but certainly not last, major flooding event hit the outlying area of Binbrook hardest, causing far less damage than it would have if that downpour had struck the downtown core. Stormwater management costs have roughly doubled in Hamilton over only ten years, and there are challenges with the way the city is trying to handle the expense.

A dedicated stormwater fee would be a logical first step, considering that the current system not only is inadequate to making the city prepared, but it also requires residences to foot the bill for their large business neighbours, who don't contribute their fair share to a problem they largely help exacerbate.

Ontario's Environmental Commissioner agrees that a dedicated stormwater fee is the best way for cities to build the readiness they need for stormwater flooding events. Why isn't Hamilton following the example of other Ontario cities by taking increasing flood risks seriously? Hearing crickets on that from Hamilton City Hall.

Environment Hamilton has a petition about it.

I also encourage contacting your city councillor to ask them why Hamilton seems to want to maximize the flood risk to residents, rather than asking local businesses to pay their fair share of tackling the problem together.

Between 1970 and 1994, flood damage cost Canada's federal disaster management fund an average of $54 million per year. Now it's up to $900 million per year. This isn't some theory, it is happening all around us where we can see it. When will we take that seriously? 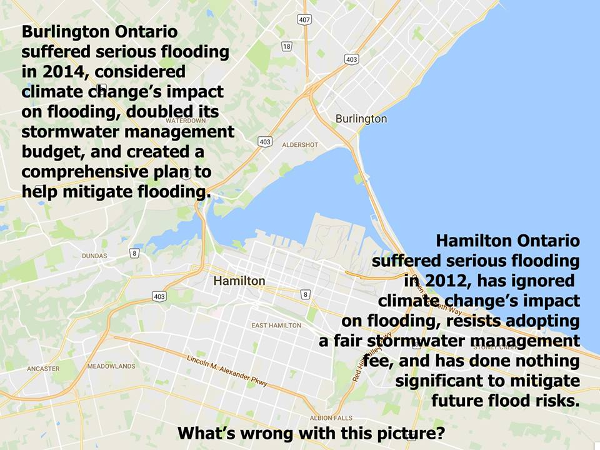